With McCoy about to become an unrestricted free-agent, should the positionally-thin Steelers consider adding another experienced-but-unwanted veteran, if his former team does cut him loose?

Fans of the Pittsburgh Steelers have always embraced Colt McCoy as a starting quarterback for the Cleveland Browns; mainly because he seemed to bring out the best in the Steelers defense - especially former QB nightmare James Harrison.

Evidently, just as Pittsburgh felt they no longer needed the services of Harrison, Cleveland has decided they no longer have a good reason to keep McCoy on the roster.

Actually, McCoy became expendable after the Browns acquired former Oakland Raiders and Washington Redskins QB Jason Campbell to compete with last year's first-round draft-pick Brandon Weeden for the starting job. The loser is sure to be the team's second-string passer, leaving McCoy little room to squeeze onto the roster.

McCoy joined the Browns as a third round selection in 2010. He pretty much broke even in the win/loss columns, and was no more inspiring than his predecessors. The signature highlight of his career came when he ran face-first into a blitzing Harrison. The collision concussed Colt, and earned Harrison a one-game suspension. (Coincidentally, the game Harrison was forced to miss was the last time a San Francisco 49ers game was cut short by a power outage, before their Super Bowl loss to the Baltimore Ravens.)

Many questioned the drafting of McCoy, despite his collegiate results. While his less-than-stellar professional record seems to explain why a team would change their mind about him, the Browns have been under-achievers for years. Their lack of success had very little to do with McCoy individually.

However, Cleveland is making strides to escape its mediocrity. In 2013, the Browns will have a new coaching staff, general manager, and CEO. They've added a few quality names in free-agency, and will once again have a relatively high placement in the draft queue. Now, they are trimming away roster pieces from the old regime, including Mr. McCoy.

Holmgren was more enamored with McCoy's brain, more than his arm. His failures usually did not come at fault of his lack of understanding. Usually it fell on the front office for not supplementing him with the right talent.

Unfortunately for McCoy, his lackluster showings as a starter in Cleveland and the team's handling of his situation will prevent team's from viewing him as a long-term solution for their future; but there are several teams in need of experienced second- and third-stringers. One such team being his former predators, the Steelers.

McCoy has starting experience, and is familiar with the AFC North way of football-life. He is also young enough to provide a team with a long-term depth solution. He would be a great fit in Pittsburgh, where a championship-winning Ben Roethlisberger is welded to the top of the depth chart, with nothing but question marks below. McCoy is a more proven commodity than John Parker Wilson, and presumably has more football left in him than elder Bruce Gradkowski. McCoy could join Gradkowski as part of a disgruntled duo of former Browns to wind up with the rival Steelers.

A look at the Steelers 2013 offensive depth chart 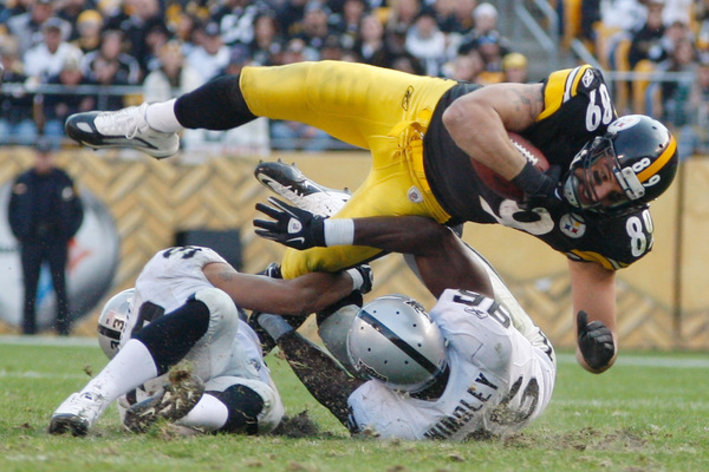 Charlie Batch made a career as a backup for the Steelers, after having limited success with his original team, the Detroit Lions. He has been a staple in Pittsburgh ever since, because of his mental capacities more than his physical faculties. McCoy could provide a similar second perception to the Steelers sideline. He would also alleviate the pressure on the team to draft a quarterback until they find one they actually want, and not just take one because he was the best player available in the fifth-round.

The Steelers are limited in cap space, and are already entertaining Ahmad Bradshaw today. They simply may not have the ability to chase McCoy without losing someone. However, if he's cheap enough - and the team really isn't bringing Harrison back for practice purposes - McCoy could leave the Hatfields behind, and find a new home in enemy territory.