National Football Post contributor Russ Lande was sending Steeler Nation an early holiday/Other Day of Celebration present when he projected Utah defensive tackle Star Lotulelei would fall to No. 17 in the 2013 NFL Draft.

Since Lotulelei's alleged heart condition was written off as little more than just the after effects of a cold, he's again nowhere near the Steelers' range.

Now, Lande is teasing us with outside linebacker Dion Jordan possibly falling to 17.

This is just getting mean, Mr. Lande.

Any and all attempts to predict the first round of the draft is more or less akin to fortune-telling, complete with disclaimer that it's done for entertainment purposes only. But that's a two-way street. We like to dismiss one opinion or another based on really nothing more than the collaborative effort of others who feel they know more than everyone else.

In the end, what we're left with is a collection of opinions, only a slight few just a little more credible than the masses. 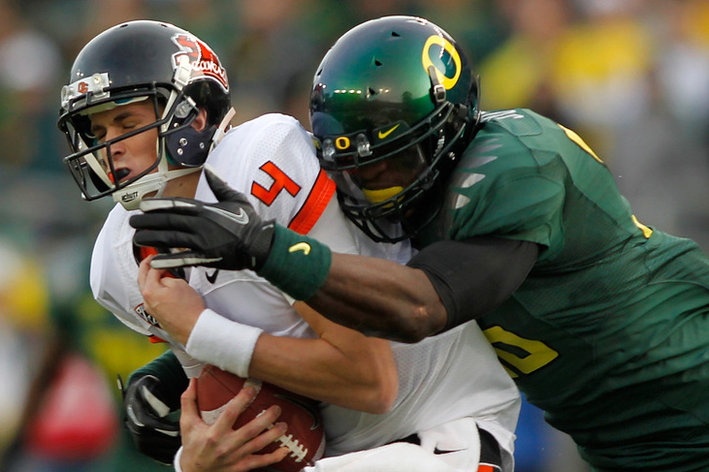 We choose to try to point Mock Drafts out merely as the prospective of another writer. It's interesting that Lande (by all accounts, a very knowledgeable subject matter expert and a talented writer) has Florida State defensive end Bjoern Werner being taken with the second overall pick - a stance that's largely cooled over the last month or so. He also predicts a resurgence of Cal wide receiver Keenan Allen - a name I've typed so infrequently lately, I just erased "Lewis" after "Keenan."

If guys like that are taken, someone's bound to fall, which seems to be the basis of Lande's prediction of Jordan landing in Pittsburgh.

Although Jordan is rumored to be a sure top ten pick; there are always a few players who slip for no real reason. With James Harrison done in Pittsburgh and Lamarr Woodley coming off a disappointing 2012 season, the Steelers must upgrade their outside pass rush to give their defense the teeth to make big plays in 2013.

And ya know what? That actually makes a lot of sense. I hate to keep railing on this, but no one - NO ONE - predicted David DeCastro falling to 24 last year. Even the Steelers were sure of him being off the board by the time the Steelers were on the clock, they attempted to trade up with the Jets to No. 16 to get him.