With the dust all but settled from the free-agency twister which re-arranged parts of the NFL landscape in March, the Steelers are still in relatively good shape as they look forward to the draft.

Share All sharing options for: Where the Steelers stand with the salary cap a month before the draft

With most of high-profile free-agency all but decided, NFL teams can now begin to focus their energy on preparing for the upcoming NFL draft.

The Pittsburgh Steelers are still kicking the tires on a few certified, pre-owned models, but with their current situation they may chose to wait until after the draft to offer any more new contracts. Teams are required to be salary cap compliant with the top-51 salaries on the ledger. Pittsburgh is actually in relatively decent shape compared to the nightmare they awoke to upon the conclusion of the 2012 season. 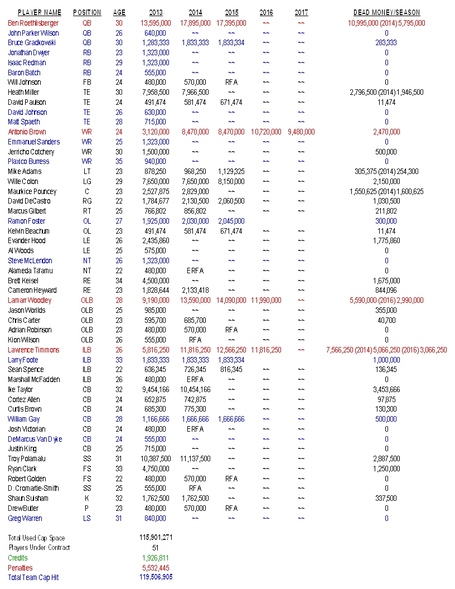 Earlier this week, the NFLPA reported the Steelers had ~$2.5 million in cap space. According to these numbers, they are actually ~$3.5 million; and it's not even our birthday. This cap space is what has afforded the team the opportunity to entertain the likes of Ahmad Bradshaw and James Sanders, although it also explains why they didn't receive immediate offers just for showing up.

When Willie Colon's salary release becomes official at the beginning of June, the team will save an additional $5.5 million, which presumably will be used to sign the team's upcoming draft class; meaning the team only has the space they have now to work with. If they are going to sign someone else before camp, they have to feel assured the player will pay-off.

We're also beginning to get a clear view of the holes the team will most likely fill with the draft, based on the fact the team refuses to allow itself to rely to heavily on first- and sometimes even second-year players. Judging by positions where players have only the current year remaining on their contract, there are plenty of positional opportunities to address for next year and beyond.

QB(1): Ben Roethlisberger and Bruce Gradkowski are under contract through 2015. John Parker Wilson is the man on the bubble in this group. He could find himself replaced by another FA QB such as Colt McCoy or Vince Young.

RB(3): Jonathan Dwyer, Isaac Redman and Baron Batch are all playing under single-year deals in 2013. If none of them impress this season, there will be a total makeover in this groups immediate future.

TE(1): Heath Miller may not be 100% when the season opens, but he will return and is here at least next season, too. The coaches remain enamored with David Paulson, leaving only the third TE spot in question moving forward. Matt Spaeth and David Johnson will provide experienced support, but neither are expected to remain in 2014 unless they have severely exceeded expectations in 2013.

WR(3): We know Antonio Brown will be here next year. That is all. Plaxico Burress, Jerricho Cotchery and Emmanuel Sanders are not committed beyond this season. The team has several youngsters technically under contract for next year, but they still need to make the team this year first.

OL(0): While many feel a better option could be had at left tackle and guard, every member of the line is under contract through 2014. This is one group which will only see a draft addition because of undeniable talent, a luxury not found throughout the rest of the roster. However, the team does need to prepare itself to offer several of these men new deals, like Maurkice Pouncey and Marcus Gilbert.

DL(2): With Brett Keisel reaching the end of his road, the team will need a quality reserve to backup/push former first-round picks Evander Hood and Cameron Heyward at end; especially with Hood and Al Woods playing on the last years of their respective deals in 2013. With Casey Hampton gone, starting NT duties will fall on Steve Mclendon, whenever he signs his RFA tender. With two unknowns behind him in Hebron Fangupo and Alameda Ta'amu, there is a possibility the team could bring in a player to develop in case McLendon doesn't lock down the job.

OLB(1): The main opening here comes at the expense of James Harrison who was released prior to free-agency. Jason Worilds is expected to take his place, but he is on the last year of his deal, as well. With the shaky past of Chris Carter and the untested talents of Adrian Robinson, the team should select at least one outsider in the draft as insurance, if nothing else.

ILB(1): If Larry Foote can play at a high level in all three years of his new contract, the biggest need in this group revolves around Sean Spence's uncertain future. If Spence can return, ILB is not as important as it seems right now.

CB(1): With Keenan Lewis no longer an option, starting duties will fall to Cortez Allen and Ike Taylor. Taylor is already in his thirties, and the team will need to start planning for his replacement. Too many unknowns persist through the rest of the group, leaving even more reason to believe the Steelers will select at least one in the draft.

S(1): Troy Polamalu and Ryan Clark cannot play forever. Robert Golden was just getting on the field by the end of 2012, and has flashed potential; but he is far from a lock to assume one of the starting roles. Few have been impressed with Da'Mon Cromartie-Smith, and even fewer agree with Bob Labriola and myself about moving recently signed William Gay to the deep secondary. Look for the team to grab a quality player in the draft if one is still available during one of their picks.

ST(?): Nobody ever wants to honestly predict the drafting of a special team-er. Luckily, we shouldn't have to. PK Shaun Suisham is still under contract for two more seasons. Sophomore punter Drew Butler had quite the learning experience in his rookie season, and longsnapper Greg Warren was recently re-signed as well. With all of the other holes on the roster, special teams is the last group needing draft attention.

There is one more thing to consider as we watch Pittsburgh progress through the rest of the pre-season. Teams are allowed to carry unused cap space from one year to the next. This created a cap credit of $758k this year. Should the team only sign draft picks between now and the beginning of the regular season, they can carry this unused space into the future.

When the team is trying to escape the cap problems of the past, they can use any extra help they can get. All the more reason to not sign FAs unless we really, truly need them.