NFL Greatest Plays of All Time has four Steelers entries

Four plays from Steelers history - two from Troy Polamalu - made it to the regional semifinals in an NFL.com feature tournament of the best plays in league history.

Share All sharing options for: NFL Greatest Plays of All Time has four Steelers entries

It's March Madness, so there's a quasi-lack of football interest across the media. It's a good time to dip into history, and pull out some features comparing the game from yesterday to today.

NFL.com is running a series on the greatest plays in NFL history, and voting for the third round, the regional semifinals is underway right now.

Four Steelers plays have made it to the quarterfinals, with two of them coming from Steelers safety Troy Polamalu.

In the Payton Bracket, Polamalu's leaping sack of Titans quarterback Kerry Collins in 2010, a 15-seed, is going against Miami's hook and ladder from the 1981 playoffs.

While it's extremely difficult to take anything away from that Dolphins vs. Chargers epic playoff game from 1981, Polamalu's sack was beyond comparison in terms of spontaneity and athleticism.

Polamalu's legacy is no doubt storied, but specifically, it was some of the plays he's made in short yardage situations like this one was. I remember seeing him standing perfectly still - like a predator about to strike, and just randomly yelling "watch Troy! Watch Troy!"

He flew over the pile, and landed on top of Collins, who crumpled like an aluminum can being crushed on the ground. The Steelers beat the Titans 19-11 in one of the most dominant defensive performances in team history.

Polamalu trails the Dolphins hook and ladder by about 3,000 votes at the time of this publication. That doesn't seem right. Let's make that change.

In the Lynn Swann Bracket, the namesake's greatest highlight - and arguably the greatest catch in league history - from Super Bowl X seems an appropriate No. 2 seed, but it's being throttled by 49ers QB Steve Young's unbelievable touchdown run against Minnesota in 1988.

Lynn Swann interview with Behind The Steel Curtain 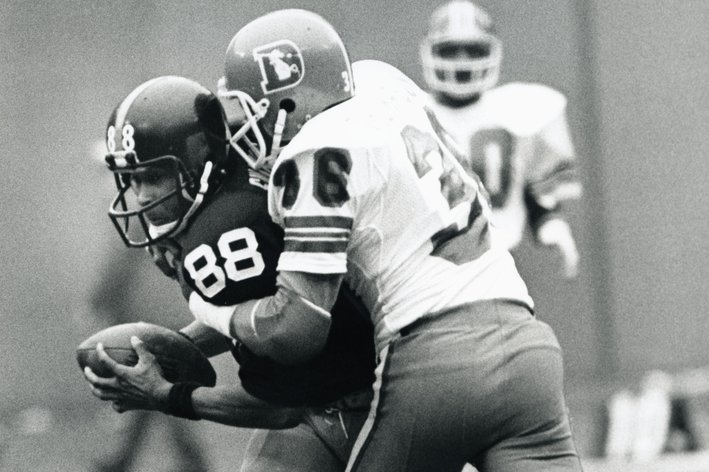 This one is hard for me because Young's run is one of my personal favorite plays of all time, simply because I remember watching it as a young kid with a bunch of Vikings fans, and laughing hysterically as Young eluded approximately 84 Vikings tacklers en route to the end zone. Good times. Still, Swann's catch is visual perfection. Look at his body control, his balance and his vision. An absolutely impossible catch amid perfect coverage.

Young is up by quite a bit and it looks to stay that way. Sad.

Rounding it out, in the Gale Sayers Bracket, Polamalu's second entry in the regional semis, his beyond-words interception against the Chargers in 2008.

I saw this game in person. I was in the owners box, actually, and I was aware of the company around me, so having to contain myself after I saw it was so much I had to stand up and walk around for a minute.

I lost it when the replay showed clearly and impossibly he had gotten his hand between the ground and the ball and secured it. I don't know how else you describe that, but the catch wasn't the amazing part. Watch where Polamalu is when the ball first starts falling to the ground. He moves about five yards in a fraction of a second. And he probably scores on the play if he doesn't fall down. I'm convinced he was so amazed he actually caught it he couldn't get his legs under him.

That's going against the playoff touchdown run of Marshawn Lynch of the Seahawks against New Orleans in 2011.

Really hard to vote against that. It's not even close right now. Damn.