Electing not to offer him a restricted free agency tender, linebacker Sylvester Stevenson will search through free agency for a new job. 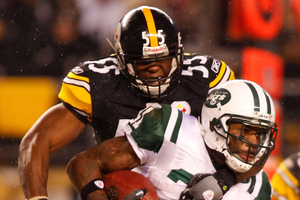 Stevenson Sylvester's tenure in Pittsburgh didn't last particularly long - just three seasons. He was not given a tender offer in restricted free agency, with the deadline to do so rapidly approaching.

Some of this is due to the Steelers' tough cap situation, and the expense of those tags when they add up. The Steelers gave original round or right of first refusal tags to all but two of the Steelers' restricted free agents - Sylvester and punter Jeremy Kapinos.

Kapinos was not expected to be retained as a RFA, although it's not out of the question he's brought back. The hope is to find someone better, but he will be a cheap option should they need to go that route.

Sylvester has battled injuries throughout his career, and while it can't be said he won't be back, it's definitely too much of a risk to offer him a RFA tag.