Top-end talent is going to start tapering off soon (if it hasn't already), and BTSC user TheCommish is here to explain the other unusual circumstances surrounding Tampa Bay's 1st round pick.

The Tampa Bay Buccaneers and GM Mark Dominik are in an extremely intriguing situation with the 13th pick of the 2013 NFL Draft.

There has been much speculation that this pick will be traded come draft day to the New York Jets for superstar cornerback Darrelle Revis. These trade rumors began over a month ago, and have never officially cooled off or ended.

The feeling within the organization is that the Bucs can compete now. As such, Dominik would rather trade his 2014 1st round pick for Revis, because the feeling is that next season will yield a later pick than this year's 13th. The Bucs organization strongly believes the team can compete for the playoffs right now.

The Bucs may disregard targeting a need here... and instead just draft best available-TheCommish

Another interesting dynamic is where they rest in the draft with regards to the talent pool. My general feeling is that teams will draft more for best player in the top-ten than for filling immediate needs. I was listening to veteran NFL scout and analyst, Chris Landry, speak on local Tampa radio on Friday. He mentioned he has 68 players with a 2nd round grade, which is the most he has ever had before a draft. Around the 13th pick is where the talent pool starts to level out, moving from the clear-cut 1st rounders to the guys that are anywhere from mid-1st to early-2nd round prospects depending on who you ask. The Bucs may disregard targeting a need here (addressing those specifically in the deep 2nd-4th rounds) and instead just draft best available.

The Buccaneers immediate needs are on defense: along the defensive line, at inside linebacker, and at cornerback. This was pretty much the case heading into free agency as well, which started off with a bang when the team signed All-Pro safety Dashon Goldson. It took a while for them to accumulate some second-tier acquisitions, which included: WRs Kevin Ogletree and Steve Smith (the other one, not their division rival with the Panthers), RB Brian Leonard, TE Tom Crabtree, DT Derek Landri, DE George Selvie, and LB Jonathan Casillas.

The team does have a history of drafting defensive line early: DTs Gerald McCoy and Brian Price in the 1st and 2nd rounds of 2010, and DEs Adrian Clayborn and Da'Quan Bowers in the 1st and 2nd rounds of 2011. Price is no longer with the team though and Clayborn and Bowers both dealt with serious injuries in 2012. The Bucs have been bringing in some more highly regarded D-line draft prospects for official visits this year too.

The way this draft has panned out has been interesting, and I think it's pretty much how the Bucs can expect things to go in the actual draft. It is no secret that they would covet a DT like Sharrif Floyd or Star Lotulelei, or a CB like Dee Milliner or Xavier Rhodes - all of whom are already gone. 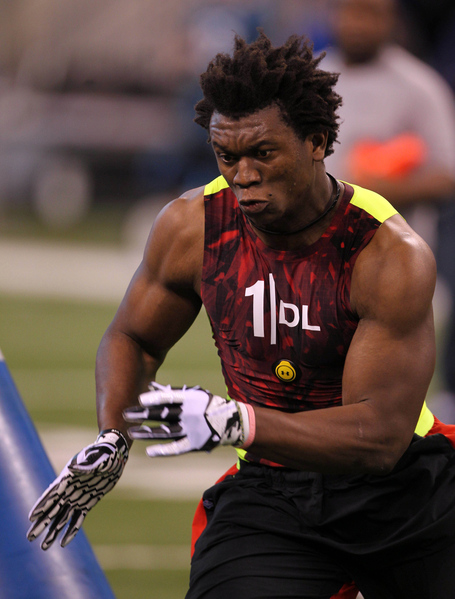 Ansah has done nothing but impress scouts leading up to the draft. He was selected as the "Outstanding Defensive Player" of the Senior Bowl, where he had a monster game with 7 total tackles, 1.5 sacks, 3.5 tackles for loss, one pass break up, and a fumble recovery. He backed that up with a great Combine: 40-time of 4.63, 21 reps on the bench, 34.5" vertical jump, 118" broad jump, 7.11 sec three-cone, and 4.26 sec 20-yard shuttle - and he put to bed the age rumors that he might have been much older.

Needless to say the 6'6, 270-pound Ansah is a freak athletically, but still an extremely raw football player: the first time he put on pads or even played the game was as a sophomore at BYU just three years ago.

So why do they need him?

The Bucs need an impact player off the edge that can get to the quarterback. Previously mentioned was that Clayborn and Bowers have had injuries, but Michael Bennett (their sack leader in 2012) also left for the Seahawks in free agency.

Ansah has been drawing comparisons to both Jason Pierre-Paul and Aldon Smith - being that he has only played football for three years and is already being compared to some of the best is special. The Bucs do address a need here by getting the best available and one of the best overall, as Ansah's ceiling may be higher than any other player in this draft.