BTSC user StoneColdSteel has the pick here for Carolina. Do you think this mock draft is breaking favorably or unfavorably so far for the Steelers?

No preamble, we're getting right to it. 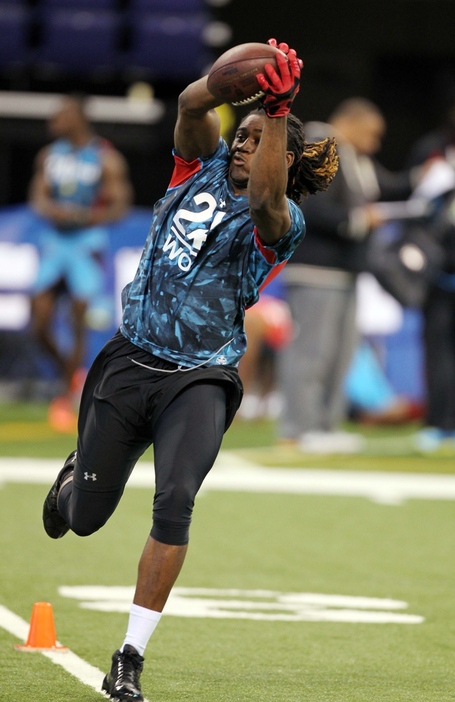 The reason I have Patterson here is because he gives Cam Newton another target and is very versatile. The Panthers old offensive coordinator, Rob Chudzinski, was a pretty innovative offensive mind who really took advantage of Newton's strengths as an athlete by using a lot of read-option and even some triple option (very rarely). Their new OC, Mike Shula, is expected to keep a lot of the concepts that Chudzinski installed for Newton, and it should be an easy transition seeing as he has been Carolina's quarterbacks coach since Newton got drafted. Newton produces big plays quite often, and Patterson can produce those down the field while he learns how to run better routes and Steve Smith works the underneath.

They need a playmaker on the outside next to Smith to make the offense more consistent, not to mention more explosive.-StoneColdSteel

The other reason is obviously because Steve Smith is old. He is still a very effective and fiery player, but clearly not as dominant as he once was. They need a playmaker on the outside next to Smith to make the offense more consistent, not to mention more explosive.

I was tempted to mock Sheldon Richardson here, partly because Steve Smith apparently wanted the team to pick him, and partly because their run defense wasn't all that great last season. But Richardson isn't all that great against the run himself, and Brandon LaFell underwhelmed in his attempt to become the Panthers #2 receiver last season. What better way to improve their receiving corps than to draft Patterson and eventually have Smith transition into the #2?

I also looked into their new GM, Dave Gettleman, and his record of draft picks. This is technically his first "official" GM job, but he was previously Director of Player Personnel with the Giants for more than a decade, and anybody that follows that franchise knows they draft well. Considering the Giants knack for finding quality defensive linemen in FA and later in the draft, I would bet they wait until the 2nd day to target some big guys for their defense.