While many people believe the Steelers would rather take an extra draft pick than match an offer which would put them over the NFL salary cap, his absence would leave yet another void at an already thin position.

Just because Emmanuel Sanders signed an offer sheet from the New England Patriots, does not mean the Pittsburgh Steelers will let him go without a fight.

At least Ed Werder thinks so.

Werder has a valid point. The loss of Mike Wallace in free-agency already pushed Sanders and fellow young money man Antonio Brown into elevated roles with the team by default. Sanders departure will only increase the pressure on Brown, veterans Plaxico Burress and Jerricho Cotchery, plus the receivers already on the training camp roster awaiting a chance at promotion - read David Gilreath, Derek Moye or any potential draft selections.

Speaking of the draft, Sanders departure would force the Steelers to raise the value of receivers for their best player available equation, on positional need alone. Not to say they will reach for one in the first round, but the thoughts asking if the team would draft a receiver just lost their question marks.

However, Werder quickly pointed out the opposite side of the coin.

What could prevent Steelers from matching Pats on Emmanual Sanders? Only 3 teams have less cap space. Pick No. 91 may tempt GM Kevin Colbert

The punctuation lost from draft daydreams now falls onto the Patriots only offering him a 1-year deal. Obviously the deal is worth more than his RFA tender of $1.323 million. Perhaps the Patriots are attempting to intentionally give the Steelers the opportunity to offer him something better, while forcing them to make a decision immediately.

Sanders was a 3rd round pick when he entered the league, and his body of work has been matched and bettered by players drafted at equal or much later spots. The Patriots single season offer says they're not overly concerned whether they end up with him or not. If they do, so be it. They'll probably then offer him an extension with a restructure, as Neal Coolong postulated earlier. If they don't, they'll take their chances in the draft.

If the Steelers fail to match in the next five days, its assumable they felt exactly the same way and would rather welcome a cheaper rookie than be forced to overpay for someone who hasn't given them a full leading performance. 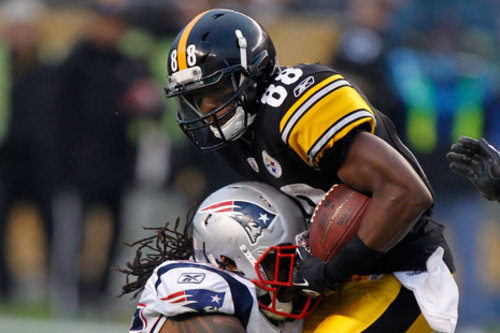 If they do match as Werder expects, they will have seven days to correct their cap incongruity from the moment they go over. This will most likely be a restructure or possibly release of one of the remaining high end salaries still on the ledger - Heath Miller, Ike Taylor or Troy Polamalu. If release is the front-office's choice, Ryan Clark and Brett Keisel climb a little further up the ladder.

Regardless of the outcome of the Sanders situation, one of the teams involved will be re-writing their draft boards upon its resolution.