With the amount known, the Steelers have until 11:59 p.m. ET Sunday, April 14 to match an offer made to their fourth-year wide receiver or see him head off to New England.

ESPN, among others, has reported the Patriots signed Steelers wide receiver Emmanuel Sanders to a one-year, $2.5 million contract. Terms of the deal hadn't previously been reported, but the amount of the deal wasn't expected to be a huge sum.

The $2.5 million figure, though, is a little less than twice what Sanders was going to get as a restricted free agent in Pittsburgh in 2013 - $1.3 million, approximately.

The question, obviously, is whether the Steelers will match it. According to the NFLPA, the Steelers are $2.069 million under the 2013 salary cap, and after some brilliant mathematical research, matching the supposed offer sheet to which Sanders has signed with the Patriots would put the Steelers at approximately $750,000 under the cap, plus or minus a few of our yearly salaries.

The contract of Willie Colon will officially come off the books June 1, and that money is largely set for the 2013 Steelers draft class. While there would be some money available, pending training camp, it would be wise to keep enough aside to be able to make an injury signing should the need arise. 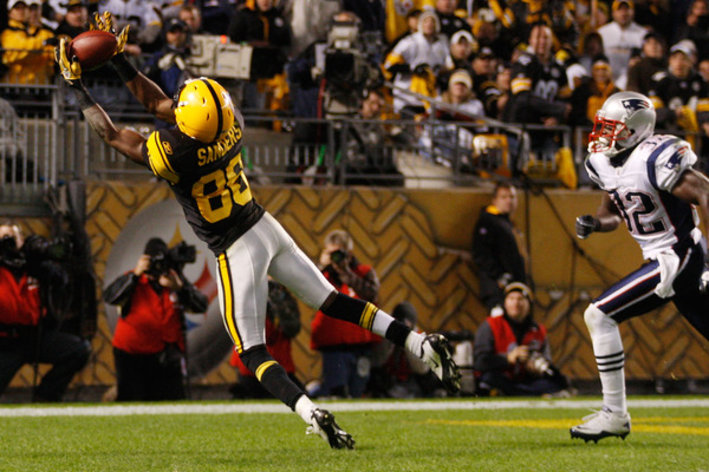 Emmanuel Sanders' potential raise would leave the Steelers with less than $1 million in cap space, pending Willie Colon's contract coming off the books.

At the same time, it's possible for the Steelers to offer Sanders an extension, along with matching the deal, to help alleviate cap restrictions. But it would seem if they wanted Sanders signed to an extension, they would have offered one.

The issue the Steelers will have to confront in weighing their decision will be Sanders' value in the long term. So perhaps the question isn't whether they'll match it, perhaps it's better to ask about the amount of stock the Steelers are willing to put into their ability to develop receivers who aren't currently on the roster.