After riding across the nation, user Thoroughbred of Sin got the imagination and the pick was sent in. It needs evaluation, so let the games begin - "a heinous crime, with no remorse!" is what some might cry until they're hoarse.

The New Orleans Saints enter the 2013 draft with two priorities: settling nearly a half-dozen question marks associated with with the shift to Rob Ryan's new 3-4 scheme, and filling a glaring, Jermon Bushrod-sized hole at left tackle. Unfortunately for the Saints, the way this particular draft has shaken out makes addressing these priorities difficult, and the team's lack of a 2nd-round pick due to Bounty-gate only amplifies the importance of hitting here with pick #15.

Management in New Orleans must have been dancing with joy after the first four picks came and went without a single left tackle being selected. Lane Johnson falling to the mid-1st would be a dream come true for the Saints, freeing up the organization to take the best available defensive players suited to a 3-4 scheme with their later picks. The Saints' interest in Johnson is real - the team hosted a visit from the Oklahoma tackle on Tuesday, prompting speculation the team might attempt to trade up and snare him on draft day.

Unfortunately, the Lions, Browns and Cardinals all seemed to have the same idea here, and Johnson, along with his higher rated counterparts, were quickly snapped up. Excitement most likely surfaced as Ziggy Ansah experienced an unexpected fall. Some may question Ansah's ability to function in a 3-4 scheme, but I think the Saints would have taken a chance on the BYU end's raw potential. However, the Bucs at pick #13 put an end to this speculation as well.

In this position, I imagine the Saints would be considering five players:

I (and for the purposes of this exercise, the Saints) believe Fluker is a bit of a reach in the first, much less in the first half of the first round, and feel he may be best suited for the right side rather than the left in the NFL. But the need the Saints have at tackle is so glaring--and the drop-off of talent at the position between the first and third rounds is so significant--that they may just bite the bullet and take the Alabama grad.

Richardson is probably deserving of being selected somewhere in this range, and if the Saints were sticking with their 4-3 alignment, he might very well have been their pick. As it stands, however, his skills don't necessarily translate well to 3-4 nose tackle (which is what the Saints are looking for at the position), and I believe the other players at DT more suited to playing in a 3-4 nose role aren't deserving of a mid-1st round selection.

If I understand Rob Ryan's 3-4 scheme correctly, his defensive linemen aren't required to eat up space nearly as consistently as LeBeau's boys, and they're given a bit more leeway to utilize their athleticism in gap penetration (something Richardson does exceedingly well). So if the Saints' brass has fallen in love with Richardson's physical abilities, he could still be the surprise pick here.

The Saints taking Vaccaro makes a fair amount of sense (SS Roman Harper is aging rapidly, and FS Malcolm Jenkins is a capable but underwhelming converted corner), and he's consistently getting mocked in the 10-20 range. Conventional wisdom says he makes for good value here... but I'm just not in love with the guy, and truthfully am a little perplexed that he's rated so highly. I see little difference in quality between the Texas grad and the next several safeties on the board, with the primary difference being that one of the other guys could easily fall to the middle of the third round and present better value. Still, I would not be surprised to see the real Saints pick him on draft day.

Ogletree seems to be the most popular draft option on BTSC's sister site Canal Street Chronicles, and his athleticism makes for a tempting selection here. Truthfully, I really do like the way he plays in space, and New Orleans' current options at ILB (Curtis Lofton, David Hawthorne and Jonathan Vilma) inspire more questions than confidence - only Vilma has played ILB in a 3-4 in the NFL, and while Lofton and Hawthorne both have played meaningful snaps in a variety of roles, neither may be standouts in this scheme. Ogletree has the athleticism to be truly special, and I think he'll be a talented mainstay in the NFL... if he can keep his head on straight.

The Georgia linebacker's very real character concerns, however, make me think twice about picking him here, especially when going to a Saints team in need of defensive leadership in the wake of a disastrous season and Bounty-gate. In addition, Ogletree definitely seems best suited to a role as the Mack 'backer rather than as a Buck, and I believe the Saints' existing talent at ILB skews in that direction as well.

So after eliminating these options... 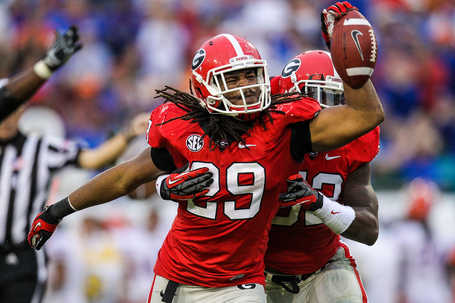 The Saints are trying to breathe playmaking life into an anemic and ineffective defense, and Jones has by far the best resume as a playmaker of any defensive player left on the board. As Steeler fans well know, pass rushing outside linebackers are the heart and soul of an effective 3-4 defense; and with the Georgia grad on the roster, the Saints take a giant step forward in achieving that goal.

Jones does come with question marks about his athleticism, health and ability to hold up against the run or drop into coverage. I believe the athleticism question marks are overblown (he demonstrates plenty of quickness as a pass rusher on tape, and a good amount of hustle chasing down plays in the open field), and recent reports suggest his health should not be cause for concern. The Saints are believers on both accounts.

The Saints are trying to breathe playmaking life into an anemic and ineffective defense, and Jones has by far the best resume as a playmaker of any defensive player left on the board-Thoroughbred of Sin

As far as the other areas of Jarvis Jones's game are concerned, one hopes Rob Ryan's scheme will utilize him the same way it did DeMarcus Ware in Dallas: by consistently pinning his ears back as a pass rusher. Doing so would put a young talent in prime position to make an impact immediately while allowing him to adjust to the more varied requirements of pro schemes. At the risk of straying too far outside my field of expertise, I believe Ware is rarely asked to drop into coverage as consistently as the Steelers linebackers are, and I suspect Jones will be used in a similar capacity.

It's worth noting that the Saints do have young talent at OLB in Junior Galette, Martez Wilson and recently-signed backup Victor Butler. And it is possible one, two or even all three might flourish in the Saints' new scheme. But there's a reason Galette and Wilson have barely seen the field to this point, and there's a reason Butler just signed for backup money.

In a position as critical to scheme success as 3-4 outside linebacker, that's an awful lot of uncertainty to stomach, and I see the Saints looking for a more sure option at the position. With Jarvis Jones, the New Orleans Saints bring top-five talent, scheme experience and playmaking pedigree to a badly-hurting defense.