Do you know who had the best division record in the NFC West last season? It actually was not the Super Bowl runner-up 49ers, or the Seahawks squad that also made the playoffs. BTSC user Hines4theHall is here with his insight into the Rams.

How much is a playoff spot worth?

Apparently, for the Washington Redskins at least, it was worth two first round draft picks and a second rounder - that's the net price they paid to acquire QB Robert Griffin III in the 2012 NFL draft.

RGIII paid immediate dividends in 2012, leading Washington to its first playoff appearance since 2007 and its first division title since 1999. RGIII has become wildly popular in Washington and around the country, with his jersey sales recently breaking the all-time single-season record.

On the other side of this trade ledger was the St. Louis Rams. On top of acquiring all those draft picks from Washington, they picked up an additional second rounder by trading down again from the #6 pick last year to Dallas' #14 pick, and stockpiled even more draft picks with other trades in later rounds.

All of this highlights the youth movement being orchestrated by Rams' head coach Jeff Fisher and GM Led Snead, each in their second year with the franchise. The team said goodbye to veteran RB Steven Jackson and WRs Danny Amendola and Brandon Gibson this offseason, among others. The few free agents the team has signed are also relatively young, most notably OT Jake Long (27 years old) and TE Jared Cook (26), the latter originally drafted by Fisher's Tennessee Titans in 2009. The Rams currently have only two players over 30 years old on their roster - G Harvey Dahl (31) and LB Mario Haggan (33) - while almost 70% of their current roster is made up of players with three years experience or less.

It was actually the Rams who had the best divisional record in the suddenly tough NFC West last season (4-1-1), and they also tied for the lead league in sacks (52)-Hines4theHall

In some ways, the Rams 2012 draft trades represent a team opting to pass on short-term success for a potentially bigger payout down the road. After a dismal 2011 season, the team appears to be heading in the right direction under Fisher's leadership. The team improved from 2-14 in 2011 to 7-8-1 in 2012, and while that record would be mighty disappointing in Steeler Nation, it's nearly cause for a parade in St. Louis, where the team hasn't made the playoffs since 2004 and has endured records of 3-13, 2-14 (twice) and 1-15 in that span. Other positive signs include the fact that it was actually the Rams who had the best divisional record in the suddenly tough NFC West last season (4-1-1), and they also tied for the lead league in sacks (52).

To avoid tipping my hand for the Rams' next pick at #22, I won't get into too much detail about Jeff Fisher's draft history or the team's needs with this post. However, the way our mock draft has gone so far plays well into the position I consider the Rams' biggest need: safety.

Last season's starting safeties Quintin Mikell and Craig Dahl are both gone, the former mostly due to age and salary cap issues and the latter due to ineffective play. The team hasn't really brought anyone in to replace them, only re-signing third-year man Darian Stewart, who played sparingly last season after starting 13 games in 2011. With only Matthew Daniels and Rodney McLeod left on the roster as other options at safety (both 2012 undrafted rookies), the team is perilously thin. The situation is so bad, I almost have visions of the Rams lining up nine men on defense on opening day this coming season. 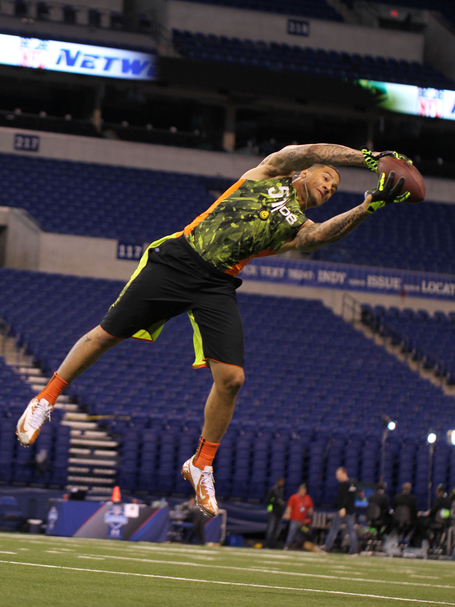 If there's one thing I've noticed in perusing the "experts" pre-draft evaluations this year, it's that they can't seem to agree on anything - even more so than usual.

People have been making a case for Texas' Kenny Vaccaro, Florida's Matt Elam, Florida International's Jonathan Cyprien, or LSU's Eric Reid as the best safety in the draft. The Rams get their pick of the bunch, and Vaccaro is the guy most consistently rated as the cream of the crop. Even though I'm pretty confident about this pick, it should be noted that the Rams have surprisingly failed to bring in any safeties for a pre-draft visit so far. Also, as I just listed the draft is pretty deep at safety, so they could go in a few other directions here. But I think Vaccaro represents the best confluence of value and need at this point.

The Rams finished 15th in the league in both passing defense and rushing defense last year, so you can't really make a case for them to need to improve in one of those areas more desperately than the other. Vaccaro does both well, as he often played close to the box at Texas and led the team in tackles in his final college season. He also has the ability to play man-to-man coverage with tight ends and slot receivers, lining up as a nickel cornerback on passing downs.

The knocks on Vaccaro are his lack of speed and experience playing deep, where he could be exposed if he's lost as a center fielder. However, with the Rams' consistent ability to get their pass rush to the quarterback, it's hopeful that Vaccaro won't have to worry about playing the deep ball very often.

Vaccaro's athleticism will also help the Rams contain the division's scrambling quarterbacks like Colin Kaepernick and Russell Wilson, especially when he lines up close to the line of scrimmage. Some doubt he will ever become an elite safety a la Troy Polamalu or Ed Reed, but he still has Pro Bowl potential and fills a huge need for the Rams.

Note on the Vikings vacancies: Our original Vikings rep did have to drop out, and those two picks are currently unclaimed. If you did not get a team and would like to participate, sound off in the comments and we'll work it out. To reiterate - priority will be given to those who do not already have a team in this community mock draft.