The Steelers’ Standard: Is there a contradiction?

Is there a contradiction between how Steelers Chairman Dan Rooney and his head coach Mike Tomlin view The Standard, and if so does that portend a deeper division within the Steelers organization?

Share All sharing options for: The Steelers’ Standard: Is there a contradiction?

As with anything in life, the meaning of a phrase such as Steelers HC Mike Tomlin's "The Standard is the Standard" is a matter of perspective.

While not as unique as his other phrases which have become known as Tomlinisms, the mantra oft repeated by the six year head coach on its surface appears to mirror similar words of other coaches past and present who speak of "the next man up". However, given Tomlin's unique ability to turn a phrase, The Standard has become more than a run-of-the-mill team's saying, especially in light of the legacy of consistency and excellence the Steelers have created since 1970. Steeler Nation generally accepts Tomlin's version to mean the same thing as "...in case of injury to the starter, the Steelers expect the next player in line to uphold the standard of play as a replacement."

Steelers' Chairman Dan Rooney's was recently quoted by the Pittsburgh Post-Gazettte's Ed Bouchette in reference to Tomlin's mantra as stating:

"Coaches will say, 'We have to play with what we have and guys are supposed to step in.' You can't say that you're trying to build up a young guy in his first or second year and get him to be able to play; you can't say that if you get your first-line guy hurt that you're going to put one of these guys in here and they'll play the same." 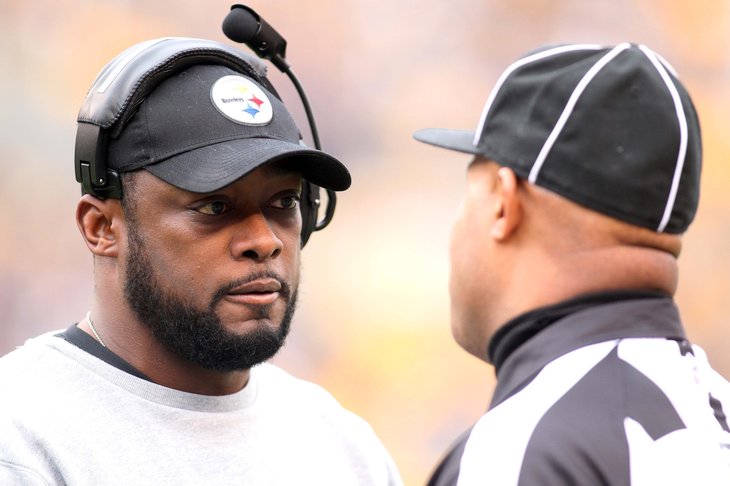 Who is right, Chairman Rooney or Mike Tomlin?

In the most recent publication of his outstanding "5 Burning Questions" series, Hombre de Acero posed the question of who is right between these two men and their seemingly contradictory perceptions.

Chairman Rooney's take on the mantra and his explicitly worded answer on what can be expected from young second string players appears to contradict the commonly held understanding of what Tomlin means by The Standard, and as such appears to call into question whether Tomlin's expectations towards the caliber of play of the younger backup players are realistic. If so, such a divergence could suggest that a deeper philosophical difference exists between the owners and the coaching staff regarding the fundamental approach the two groups hold towards building and maintaining a playoff caliber team.

When Mike Tomlin utters the words "the Standard is the Standard" in response to questions asked about injuries to specific starters and his expectations of the second stringers he will have replacing them, is Tomlin really implying that he expects the replacement to play at the same level as those they replace, as apparently contradicted by Chairman Rooneys statement?

Or could it be that Tomlin, in a rhetorical equivalent to aikido, is controlling the thrust of the reporter's question by turning its focus on the individual aside in a tacit acknowledgement that the Steelers are going to suffer a downgrade in performance with that particular player, and in a counter thrust is using the force of such a question to instead to deliver a message to the rest of the starters who are playing that it is incumbent upon them (and not the replacement player) to step up their game in order for the overall team's expected standard caliber of play not to suffer from the absence of the injured player?

Implicit in this supposition is The Standard's Schrödinger Cat - like state of existence in which it is both Tomlin's expectation of a continuance of excellence regardless of the presence of second stringers replacing starters as well as the Chairman's expectation that replacement players are not expected to be as good as the starters. In other words, The Standard means the Steelers (as a team) are expected to uphold the standard of winning no matter which Steeler players are on the field.

This perception of The Standard does not imply that the replacement players are expected to be just as good as the starter, but rather the Steelers in a collective effort by the remaining 52 players must come together and overcome the added burden imposed by an injured comrade in order for the standard level of performance expected of the team as a whole is maintained.

"The good teams, the dominant teams, aren't necessarily dominant in stadiums, but they are dominant largely in moments, when they do what's required to get out of stadiums with victories." -Mike Tomlin

Even while acknowledging the eventual Super Bowl winning Baltimore Ravens were at their nadir when the two teams played their second game of the 2012 season, the fact that the Steelers were able to defeat the Ravens while using a third string quarterback behind a patchwork offensive line and discombobulated rushing attack illustrates almost perfectly the duality of The Standard; thirty-seven year old third string Charlie Batch was not expected to perform to The Standard of franchise quarterback Ben Roethlisberger, and he didn't. But the Steelers were expected to perform to The Standard of the Steelers and they did, defeating the Ravens 23-20 in Baltimore.

There is no contradiction between how the two men view the Steelers' "The Standard". Rather, both men's perspective on The Standard are right, and are not mutually exclusive; it all comes down to what perspective you are taking when considering the context of the meaning of The Standard.