The Steelers unexpectedly matched the Patriots offer sheet signed by Emmanuel Sanders. Some of the reason for that might be the status of injured primary receiving target Heath Miller.

Share All sharing options for: Heath Miller Injury: How much did knee injury affect Steelers decision to match offer sheet?

The least expected move of a wildly active offseason for the Steelers came Sunday evening when the team announced it matched the Patriots one-year $2.5 million offer sheet to restricted free agent Emmanuel Sanders.

It's now time to question why, exactly, they decided to give Sanders nearly a 100 percent raise on top of the original round tender deal they gave him.

One logical reason could simply be they're worried about the amount of targets they may have for quarterback Ben Roethlisberger. After losing WR Mike Wallace to a five-year, $60 million deal with the Miami Dolphins, it was already seen as big opportunities for Sanders and Antonio Brown.

Tight end Heath Miller suffered a torn ACL in Week 16 last year, and shouldn't be expected to come to training camp at 100 percent. Perhaps the Steelers considered losing two receivers along with dealing with the rehab of Miller too much to replace in one offseason. 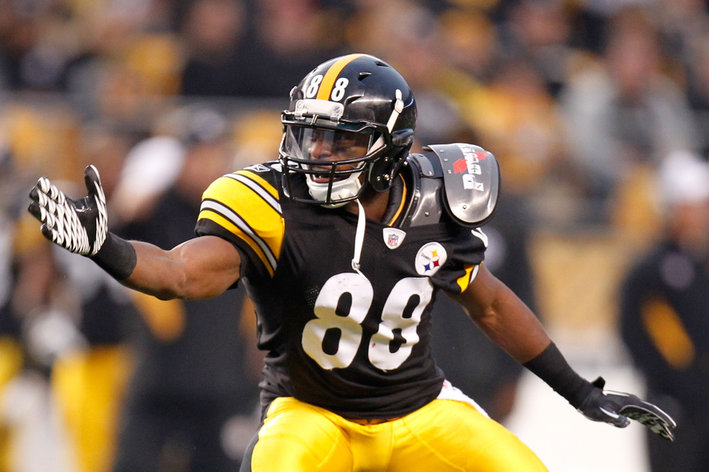 Not every player is Adrian Peterson, and somehow capable of coming back at 95 percent in seven months from that severe of a knee injury. The Steelers had Leonard Pope, who remains unsigned, and David Paulson, who's entering his second year, behind Miller last season, when he had 71 catches and eight touchdowns.

The team signed Matt Spaeth, primarily a blocker, and David Johnson, who's coming off a torn ACL of his own, so far this offseason. Neither were outstanding receiving options when they played in Pittsburgh.

If nothing else, Sanders, when healthy, is a solid target in a passing offense that seems to be amid an overhaul in preparation for the 2013 season.