Finding the low-round, high-production players is a staple of any championship team. Targeting those players before the draft, and not after the season starts, is the hard part. Here are some offensive players who aren't likely to be drafted highly but could make an impact right away.

Every year there are prospects that seemingly come out of nowhere to impress in there rookie years. In 2011, Demarco Murray was a third-round pick of the Cowboys. He exploded on the seen, and is a big part of the Cowboys' offense. To a lesser extent, Stefan Wisniewski of Oakland proved he could be a top interior offensive linemen.

In 2012 it was someone like Alfred Morris the sixth round pick of the Washington Redskins out of Florida Atlantic. These players may not be drafted very highly, but like their predecessors, they can make an impact right away in the NFL.

I can't in good faith list a single quarterback as underrated. Most of the top QBs in this draft have already been mentioned as the potential best in the class. The others simply just aren't good enough in my opinion.

I have already talked a lot about Christine Michael. He is a big physical runner with deceptive lateral quickness and good vision. He isn't regarded as the top running back his tape make you believe he is because of the lack of carries in his senior season. With a new coaching staff at Texas A&M Michael only got 13 carries in the season opener. Michael was upset about this and vocalized his opinion apparently in a way that violated team rule. He was suspended for the following game where he would criticize the play calling on Twitter from home. This only led to fewer carries. However I believe the real sentiment of how the coaching staff felt about his play was evident in their goal line situation. Michael was the go to goal line back and scored 12 TDs despite having less than 100 carries on the year primarily because of this. 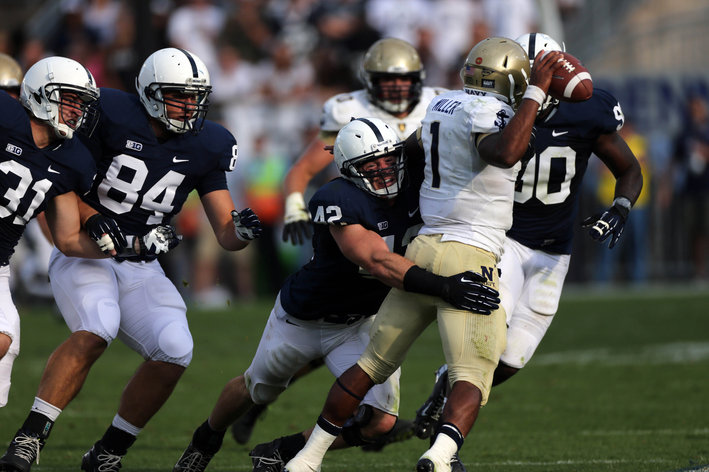 Breaking down some of the options the Steelers may have in this year's draft.

A potential Heisman candidate in 2011 Ball looked to be one of the best RB in the 2013 draft. An off-season injury along with loss of NFL talent along Wisconsin's O-line caused his 2012 stock to drop. However if you really watch the tape of Ball's closely you will see a player who is even better than he was in 2011. Montee Ball possesses a good blend of balance, power and change of direction skills. He is one of the most determined runners of the class and never stops his feet. However the best aspect of Ball's 2012 tape is less noticeable at first glance, his vision. Ball sees the blocking in front of him and understands how to set up his blockers. He can quickly identify cut backs and shows excellent patients to let the blocking develop. I have moved Ball to my second best running back in the draft behind Michael. Some people will knock him for his amount of touches in college but I rebuttal with the fact that high amount of carries in college hasn't slowed Ray Rice any now has it.

Call it small school bias, call it west coast bias or maybe just a matter of being over looked but Gavin Escobar is rarely regarded in the same breath as the two top tight ends in the draft. The 6-foot-6, 254 pound tight end however may be the most natural receiving tight end in the class. Escobar is smooth in his route running, has excellent hands and body control. He is very comparable with the top TE Tyler Eifert as a receiver and in my opinion blows away Ertz with these skills. Unlike Eifert though Escobar needs major work to even be an effective (not dominant) blocker in the pros. Despite this if I am looking for a big receiving threat as a tight end like many in the league are I will go with Escobar who I could get in the top of the third round over Eifert who will likely go in the first round.

Josh Boyce measures in at 5-foot-11 206 pounds. At the combine he ran a 4.38s (4th fastest ) forty yard dash, he benched 225 pounds 22 times (2nd most), ran the three cone drill in 6. 63s ( 3rd fastest), jumped 10 feet 11 inches in the broad jump (4th longest) and did the 20 yard shuttle in 4.10s (9th fastest). On tape he is a polished route runner and savvy. He is explosive and probably the best offensive weapon on TCU squad. In 2012 caught 66 passes for 891 yards and 7 TDs but it was a season plagued by poor QB play . In a three years at TCU Boyce caught 161 passes for 2535 yards and 22 TDs. Despite TCU showing potential Boyce decided to head to the NFL. Why? He has already graduated with his degree in three years. Boyce did have surgery on his foot but he is assumed to return healthy and he could be a sleeper play-maker in this draft.

Harper's low stock might be attributed to having the worst QB prospect in this draft class throwing him the ball in Collin Klein. The 6-foot-1 229 pound receiver from K-State has very reliable hands and good body control. Harper also displays good long speed for his size. He has been knocked for his lack of explosiveness in his routes but his physical play as well as size can't help but remind me of wide receiver from Florida State in 2003 who was a second round pick of the Cardinals. In the bottom of the fourth round I think Harper can make an impact on a team.

Lanear Sampson is 5-foot-11 204 pounds and was over shadowed by teammate Terrence Williams at Baylor. Despite this he still finished his career at Baylor with 163 receptions, 1905 yards and 11 TDs in four years at Baylor. At the combine Sampson ran in the low 4.4s for his forty yard dash and did an impressive 20 reps on the bench. On tape he show an excellent ability to locate the ball and catches with his hands, and a strong base to break tackles after the catch. His best attribute may be his blocking where he excels for a receiver. I can't figure out why many have an UDFA grade on Sampson. He doesn't have the best route running, isn't the most explosive player being marked off that he struggles to get separation and he lack ideal size but, I think Sampson can make a roster. The most important thing for a WR is their ability to catch and Sampson has that ability as well as decent long speed why that isn't worth at least a seventh round pick is beyond me. I can't help but be reminded that Victor Cruz was graded low for the exact same things in 2010.

Faulk looks the part at 6-foot-6 331 pounds. He finished his first season at LT in 2011 with a second team All-SEC selection. Faulk looked poised to have a good year in 2012 with a likely second round pick at stake. Instead he tore his ACL in the season opener. In 2011 Faulk showed the ability to handle SEC D-lines and he may be a sleeper as a starting OT in the NFL.

Williams is 6-foot-6 318 pounds and earned All-ACC honors in 2012 despite missing the last four games of the season with a torn labrum. Williams has some nastiness to his play and flashes some athleticism. As of right now Williams needs to polish his technique but looks to be a solid pick as a backup OT.

Winters was a 6-foot-4 320 pound LT for Kent State. However Winters doesn't have the quick feet needed to be a LT in the NFL. He does however play with a low base and show the nastiness in run blocking to succeed in the interior offensive line.

In the Ivy league J.C. Tretter was rarely challenged at left tackle. Like many small school left tackles his footwork and speed will force him into the interior line. I believe Tretter can have a nice career there but it remains to be seen how he handles the large leap in competition.

I know Jones is arguably one of the top three centers in this draft but in my opinion he is the best. Barrett Jones is very smart has started and excelled at three different positions on Alabama line and makes all the calls. While he isn't a mauler off the line Jones is going to be a good center in the league. His stock is lower than most because of his foot injury.