Why Pittsburgh retaining Emmanuel Sanders is a good thing

Maybe getting that 91st pick and the extra cap space would have been the best thing to do. But here is one person's biased opinion as to why the Steelers probably did the right thing.

Share All sharing options for: Why Pittsburgh retaining Emmanuel Sanders is a good thing

There are seasons that are peculiar to professional football throughout the year. These seasons elicit predictable reactions from followers of the game. From mid July through the end of August is preseason; the time of training camp and focused preparation for the new season. After more than half a year removed from the game there is high anticipation and expectation associated with seeing the players in uniform, going through their paces. When you have endured a forced fast any morsel of food seems a banquet.

I have attended Steelers training camp at Saint Vincent College along with literally thousands of fans for the past couple of years. I usually come away from the sessions with mixed feelings. Its hard, for me at least, to not oversell myself as to what I am actually going to witness there. I usually position myself high on a hillside getting a panoramic view of what I might imagine to be the Battle of Gettysburg. What I get is practice. You know, like the basketball player Allen Iverson said, "practice". Not that it's not fascinating in its own way, but you have to be in the proper frame of mind. It's like being at a three ring circus where you have to make decisions almost every minute as to what is important and worthy of your attention. And even then its small things, nuance, looking for nuggets of insight in a sea of the mundane.

Last summer the wide receivers were an exception, they were endlessly interesting. First of all there was the guy who wasn't there. The previous summer I noted that there were more fans wearing Hines Ward jerseys than any other player. Troy Polamalu was second. Now Hines wasn't here. Then of course there was Mike Wallace and all the drama that his saga had generated to that point. With Ward gone and Wallace going in the minds of many attention was being paid to the youngsters who might move up the roster. These included players with ties to local colleges and high schools, interest was high.

But make no mistake the star was Antonio Brown. Brown is one of the relatively rare veterans who practices and generally conducts himself in that setting in the manner in which we would hope and imagine these players would practice; all out all the time. In addition he was charismatic; playing to the crowd, leading cheers. It was a treat to watch Brown and Ike Taylor, another one who didn't dial it back to go at each other with an intensity so great that a few days later the two would come to blows. 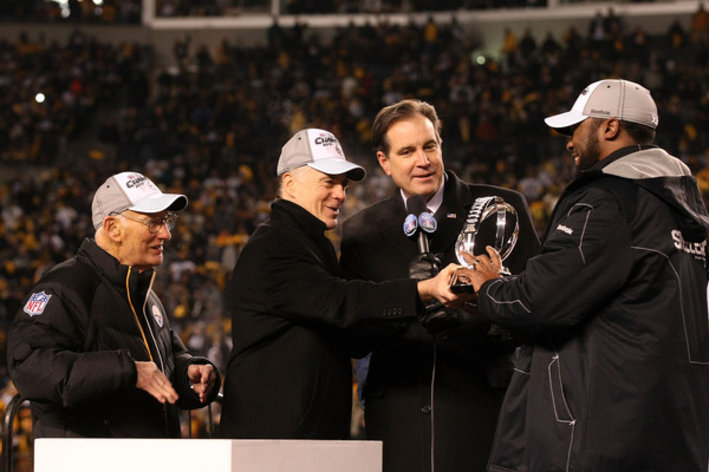 Is "The Steelers Way" a contradiction? BTSC's PaVaSteeler breaks it down.

While that battle attracted the lion's share of the attention from the fans, on the other side of the field the receiver that had been an afterthought in this drama was also working. Emmanuel Sanders and Keenan Lewis were going at each other just as strong and just as hard as Brown and Taylor, and one thing was obvious to this observer; there didn't seem to be a dime's worth of difference between the talent being displayed by Sanders and that of Brown.

I mentioned seasons earlier on. The season we are in now is one where fidelity to abstractions is dominant. We assign inflated importance to forty times, bench press repetitions, cone drills and game tape where a player torched some kid from Wake Forest. Its all upside and measurables, but its the things that can't be measured that makes this more of a crap shoot than some aren't willing to acknowledge. Its about whether or how someone adjusts to a higher order of speed and violence, where no one's a chump and everything is less forgiving.

Brown is one of the relatively rare veterans who practices and generally conducts himself in that setting in the manner in which we would hope and imagine these players would practice; all out all the time.

Here's the thing; Emmanuel Sanders can play. Maybe that 91st pick can play, maybe he could play even better than Sanders, but we're not in the same solar system of that being a guarantee or even a 50/50 proposition. Remember when Tomlin was asked about the competition between Sanders and Brown for playing time when they were rookies and Tomlin turned the phrase "Two dogs and one bone". Do you remember who won that competition? Hint: it wasn't Brown.

I get the other side of the argument, I really do. Yes, there are cap problems and a history of injuries. But for me it keeps coming back to, he can play. So there were a few things I found hard to accept. That we were just going to let this guy go to one of the very few teams that could stand in the way of Pittsburgh getting a seventh Lombardi, a guy who would most likely become their best receiver when he walks in the door. That we were going to succumb to the dreamy notion that guys who can really play in this league grow on trees and in two weeks we were just going to mosey down to the orchard and pick us a couple of players. This coming from people who were saying out of the other side of their mouths that they were questioning the competence of the Steelers FO to select quality players in the draft. And then there are all those who feel that an 8-8 season is sufficient cause to blow everything up, that Colbert and Tomlin and anyone else that doesn't acknowledge that the team isn't in serious transition is either lying or delusional. Some of those same people who assured us over the past few days that Sanders was definitely gone. It may be worth remembering that six seasons ago a Steelers team populated by Alan Faneca, Joey Porter, Troy, Ben, Aaron Smith, Marvel Smith, Hines, Casey Hampton, Heath, Ike, James Farrior, Foote, Deebo, Hartings, Hoke, Keisel and a number of others most in their prime went 8-8. Should that group have been blown up? Things that look possible (or impossible) in March and April often don't make any sense in the fall.

I don't know if this was the best thing to do. Time will tell I guess. But I am with Ben in that I think this is the right thing to do because Sanders can play and there are only so many players that you can allow to walk away if you're serious.