Regardless of who's been catching the ball for the Steelers, their ability to get after the passer has been mediocre over the last two years.

Share All sharing options for: 2013 Steelers Draft: Priority could shift with Sanders signing

Cordarrelle Patterson is a uniquely gifted individual. You may have read that a time or two on here.

But with recent movement within the division, and the retention of wide receiver Emmanuel Sanders, it gives a prognosticator pause for thought as he wraps his head around the Steelers' upcoming draft.

Maybe it just simply isn't about the wide receiver this year.

The Ravens lost Paul Kruger (who only played at a high level during a contract year) while gaining Elvis Dumervil, and will have Terrell Suggs back at 100 percent from an Achilles tear last May. Cleveland, who finished third in the NFL in sacks, gained Kruger and lost nothing else, and have the sixth pick in a draft chock-full of pass rushing talent.

The Bengals had a down year, and finished 11th in the NFL in sacks. They're talking to James Harrison, who could fill a situational role for them, or even start at strongside linebacker in their base. More than anything, though, he'll add to an already deep and confusing front seven.

The Steelers have added nothing to improve upon their middle-of-the-pack 37 sacks from the previous year. Perhaps they'll get a boost in the form of a healthy LaMarr Woodley, but his health hasn't exactly been a sure thing over the last year and a half.

Outside of Woodley, there's the unproven but reasonably productive Jason Worilds. Surprise, surprise, though, he's also been injured a fair amount of his NFL career. So has Chris Carter, and undersized and under-experienced understudy for Harrison and Woodley the last few years.

Could Jarvis Jones be the Steelers target at 17? 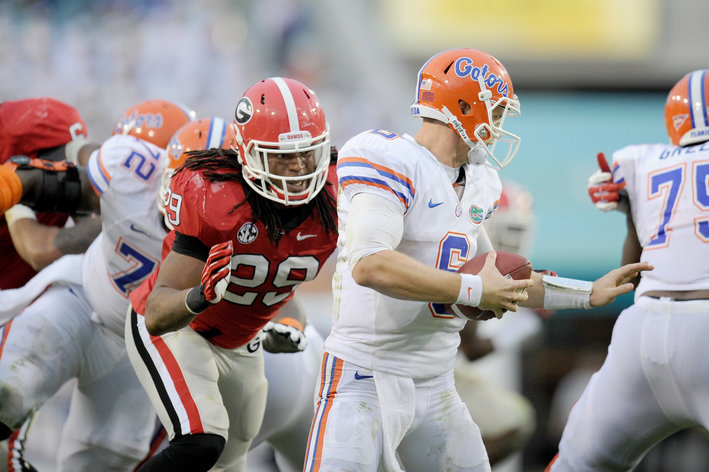 Leading up to the 2013 NFL Draft, it appears Georgia OLB Jarvis Jones will be the best pass rusher available at the 17th overall pick. The Steelers recently brought him in for a visit.

Former undrafted free agent Adrian Robinson has yet to have a reported injury; he's just never played. Perhaps he's a player who could pan out, but expecting him to log significant snaps this season is silly.

Maybe addressing the pass rush is going to be the priority in the first round, come hell or highly touted receiver.

Baltimore and Pittsburgh tied for total sacks this season with 37. Injuries affected both units, but while the Ravens improved both over the playoffs of 2012 and this offseason (in a manner of speaking, and dependent upon Suggs finding that burst he's had throughout his career), the Steelers haven't added any piece to a puzzle that's been largely unsolved over the past two years.

Pittsburgh has 72 sacks combined between 2011 and 2012. Cincinnati has 94, which is second-most in the NFL over that span (Minnesota, 96). Baltimore has 85, Cleveland has 70. Cincinnati and Baltimore have four playoff appearances between them, Baltimore has a Super Bowl championship. Pittsburgh has lost 10 of its last 20 games and Cleveland is...Cleveland. At least the Browns are showing improvement in that area, however.

Whether it's the first round or seventh round, the Steelers will need an infusion of talent among its pass rushing group. Whether that player would primarily play on the inside or outside, a player who could equally generate pressure from both spots would provide a necessary upgrade to a unit that's starting to wallow in mediocrity.