The pick is finally in for the best franchise in the whole wide world! (Sorry for it taking so long.)

First off, my sincere apologies for this pick being so late. This could and should have been completed much earlier, and I am sorry to everyone that has yet to pick in this community mock draft - not to mention all of you BTSC readers - who have been kept waiting, with no explanation.

Fair warning: what immediately follows may be a long-winded explanation for why this took so long. Feel free to scroll to the next set of bolded text if you don't care.

The Steelers pick was reserved from the get-go because we are a Pittsburgh Steelers blog (thanks, Captain Obvious!) and the last thing we need is everyone fighting in the comments over who gets to play our favorite team. Traditionally, the esteemed maryrose has done Pittsburgh's picks in our community mock drafts, but he declined very graciously for this year because he did not have the time.

We tried to explore another option, and had hopes that we could put together a cool little treat for you guys with the Steelers pick. My original target date was last Friday, but was asked to push it to Monday - which seemed reasonable given that the deadline for Sanders' tender was Sunday (and that decision would undoubtedly shape the team's top needs). Sanders was retained and Monday arrived, however, wasn't hearing any word on the progress, and was about tired of waiting and feeling acutely aware of the cascading delays for getting the rest of the picks done.

Emmanuel Sanders coverage: Everything we know

Just as I was about to pull the plug on waiting and just get it done, the initial news broke about explosions at the Boston Marathon.

I had to see what was up, and figured some little post could wait just a little bit longer to be written. Then as the full scope and magnitude of the tragedy became clearer, my interest in trying to put together a post that afternoon/evening quickly hit zero.

I went to school at Boston University. It wasn't too long ago when I would've been partaking in the proud tradition of getting hammered bright and early on our day off, and then wandering out through the celebrations (the course literally runs right through BU's campus). If I'd stayed in the Boston area - like many of my friends did - that absolutely could've been me down there near the finish line on Monday afternoon. And it only took two phone calls to confirm that a bunch of my friends were indeed right around there when it happened.

Fortunately, no one I knew was injured. Unfortunately, many were not so lucky.

I don't like using the word "luck" there, but I'm not sure if there is anything more accurate.

So, the pick did not happen on Monday; got word that evening that it should get done the next day (yesterday), but it still did not materialize. And now we are here. This community mock draft has been my little slice of controlled chaos, and again, I sincerely apologize for this pick being so late.

Sure thing, but this isn't just me making whatever my personal pick is here -- let's make sure we're clear on this.

This was your pick - based on the feedback to the poll and in the comments to the last post - while I'm just writing it up in my own very special way.

I will concede that I might have unintentionally biased the poll a little bit by not including inside linebacker as an option. The oversight probably came from my personal impression that if Alec Ogletree was not such a consistent and reliable imbecile off the field, he would be rated higher than Arthur Brown on most boards. Character absolutely should factor into prospect evaluations, and as such, Ogletree probably does not deserve to be picked here. But on principle, I don't like breaking the ice for a position by spending a 1st round pick on a guy that may not actually be the best on-field prospect at that position, and as such have cooled a bit on Brown at #17. 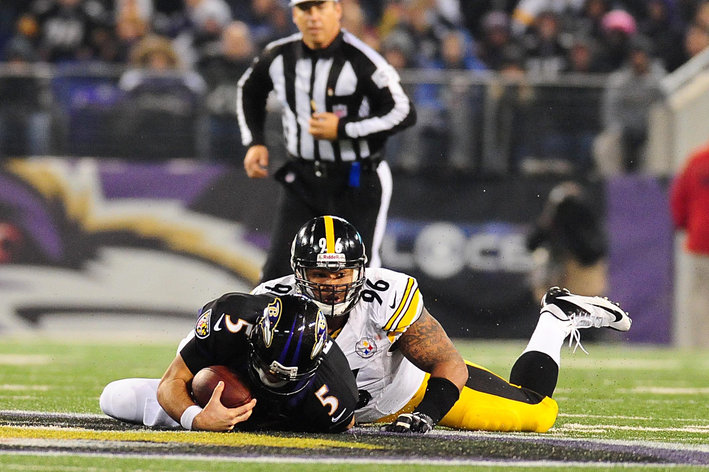 What does the film say about Hood's play in 2012, and what does it portend for him as he enters his contract year?

I also did have defensive tackle and Sheldon Richardson listed as an option before deciding to remove it. Somewhat surprising that Richardson hasn't been picked yet, and sure, it could be funny if the Steelers took another 3-4 DE conversion prospect from Missouri to potentially replace Ziggy Hood (who is going into his contract year). But the option just seemed like too much of a longshot, while also not being nearly as funny as the thought of Geno Smith to the Steelers. 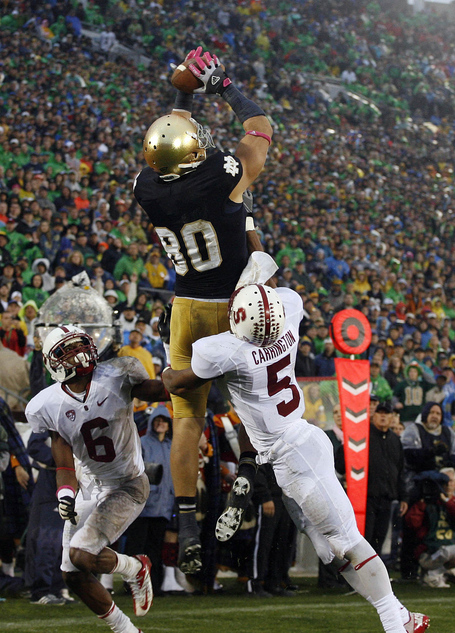 I'm not always a fan of gambling in the 1st round on the raw kid with a really high ceiling but really low floor, and Tyler Eifert is pretty far from that as a well-rounded prospect with a high floor.

Eifert may not be the sexiest pick or sweetest value possible when the Steelers are up next week (and I do love you guys for managing to get Cooper, Austin, Patterson, J. Jones, and Vaccaro all off the board by now), but the Notre Dame tight end really doesn't seem to have the same bust-potential as some of the guys on that list - not to mention some of the likely alternatives that are also available here.

As has been written around BTSC before, Eifert would be a great short-term complement to Heath Miller (once Miller and his torn knee ligaments get healthy again), and an ideal long-term replacement. Comparisons between the two seem quite fair - both check in at approximately 6'5, 250 pounds, and they're virtually indistinguishable if you put them side-by-side. 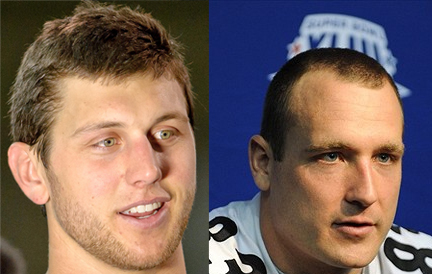 Also in an interesting twist - if Matt Spaeth manages to stick around for this season ahead of David Paulson, the Steelers could actually have three former John Mackey Award winners (college football's most outstanding tight end) all at the same time if they do draft Eifert.

If that doesn't scream "Championship!" then I don't know what does.