Some prospects that are probably better suited to a 4-3 defense seem to have slid a bit in general in this community mock - could some of it be bias by 3-4 fans? BTSC user Lamarr56 has the pick here.

The Dallas Cowboys have many needs this year, as it seems like they do every year. They have many options where to go in the draft. Here are some of the biggest needs that could be addressed in the first round of the draft.

The Cowboys offensive line was pretty bad last year. The line as a whole gave up a total of 36 sacks in 2012, ranking them in the bottom of the league in sacks allowed, though not all were actually the O-line's fault (but due to Tony Romo's scrambling). Regardless, the Cowboys need to do a better job of protecting their new $100 million dollar quarterback. One problem at pick 18 is that the value is not great at offensive line. Jonathan Cooper, who I was eyeing, is long gone, not to mention Chance Warmack and the top 3 offensive tackles. When you're giving your QB $55-million guaranteed, he better be protected somehow.

The Cowboys have struggled at safety for as long as I can remember, and are in need for secondary help desperately. They addressed CB just last year with the 6th overall pick (Morris Claiborne), so I do not see them going there in the early rounds due to the young starters that are being developed. Even with the signing of former-Steeler Will Allen, they will need a young, consistent starter for the future. One obvious name that comes to mind in this draft in Kenny Vaccaro, the top safety. Vaccaro is a Jerry Jones man-crush, and according to some he is considering trading up to get Vaccaro if he doesn't think the safety will be available at No. 18. Vaccaro is obviously off the board right now (to the Rams) and I don't see any other safety being drafted this high in the first round.

The Cowboys are entering their first year as a 4-3 defense under new defensive coordinator Monte Kiffin. Time will tell if Anthony Spencer and DeMarcus Ware have what it takes to play as 4-3 defensive ends and can adjust to playing with their hand in the dirt. I think the interior of the line is a big need with Jay Ratliff aging and no other big name in the middle. The biggest name defensive tackles - Star Lotulelei and Sharrif Floyd - have been snagged in the top-5, but there is still a young, franchise-type player who would be a great addition and make the scheme transition much easier.

With the 18th pick in the 2013 NFL Draft, the Dallas Cowboys select Sheldon Richardson, DT, Missouri 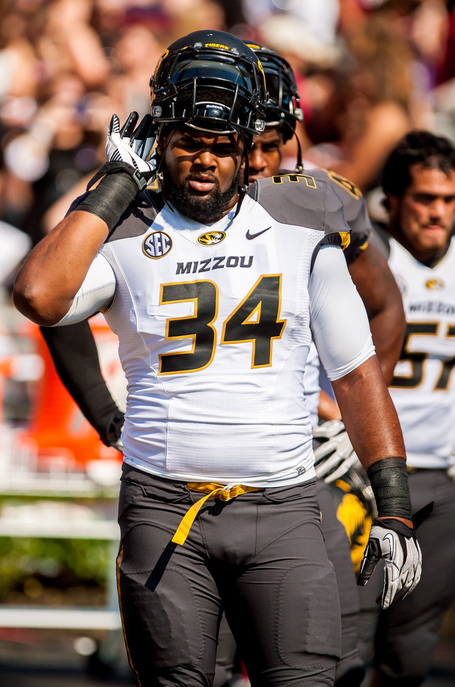 Richardson is the perfect fit for a 4-3 defensive tackle. He will help this new defense and will be a great guy to build the defense around. At 6-3, 300 pounds, Richardson is somewhat lean for a tackle, but he is one of the best athletes in this draft and the best you will see at his position - very quick and very light on his feet for a big guy.

Richardson is somewhat lean for a tackle, but he is one of the best athletes in this draft-Lamarr56

Richardson is a very good pass rusher and will not be like a Casey Hampton-type who provides little-to-no pass rush and has to be taken out on passing downs. Also, this guy never quits. He has a nonstop motor that will never burn out; the energizer bunny.

Still, he sometimes struggles to use his strength. Even though he dished out 30 bench presses at the combine, he will sometimes get washed out of a run play due to an inability to get leverage on an offensive lineman. If he is drafted into an organization with a good defensive line coach that will teach him how to get leverage more consistently and use his power, you're looking at the next Geno Atkins.