Remember when the Giants were Super Bowl champions? It's weird, seems like it was more than just a year ago. BTSC user and New York resident BlackandGold has the pick.

After winning the Super Bowl just over a year ago, the New York Giants completely fell apart towards the end of the 2012 season and failed to make the playoffs. Now, they are in the process of trying to "reload" in order to make another championship push while quarterback Eli Manning is still in the prime of his career.

Multiple times last year, the Giants' defense was unable to get stops when they needed it most-BlackandGold

When looking at the team as a whole last year, much of the blame for their lack of a postseason falls upon the running back situation and the defense as a whole. Multiple times last year, the Giants' defense was unable to get stops when they needed it most, and often were saved thanks to the right arm of Eli. The game against the Redskins at the Meadowlands comes to mind - when Manning and Victor Cruz hooked up for a game-winning 77-yard touchdown just two plays after New York's defense had allowed Washington to take the lead with just a minute and a half left in the game.

Speaking of Cruz, the salsa-dancing, Pro Bowl wide receiver is currently a restricted free agent who is looking to command big bucks from the Giants. However, the Giants are in a salary cap dilemma, as they hope to sign wide receiver Hakeem Nicks to a long-term contract, as well. Thus, with the possibility of losing either player to free agency in the near future (while also showing a failure to compensate for the loss of Mario Manningham with a reliable third receiver at times), it would make sense that Big Blue would look for a wide receiver to add through the draft.

However, the best wide receiver in the draft, Cordarrelle Patterson, is already off the board. While Keenan Allen is a legitimate early-round prospect, I believe there is much depth at the wide receiver position in this class, so there is no need to reach in the first round.

Additionally, the New York Giants are desperate for a middle linebacker. Yet somehow, I don't believe the New York media would be particularly kind to Manti Te'o, and furthermore, Alec Ogletree is definitely talented, but he does not seem like the kind of guy to prosper under a no-nonsense coach like Tom Coughlin.

Meanwhile, Osi Umenyiora found himself going south to Atlanta, and if the Giants are known for anything, it is that their pass rush is consistently rated near the top. After losing Osi and with Justin Tuck flirting with retirement, New York needs to find a way to help Jason Pierre-Paul get to the quarterback. 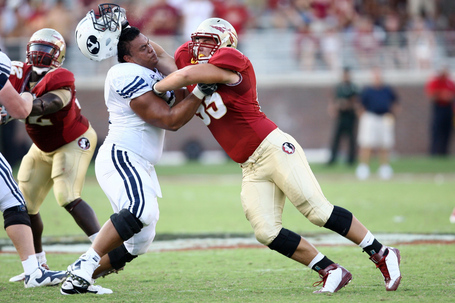 Bjoern Werner has a decent first step and a relentless motor to get to the quarterback. Assuming RGIII's knee heals up alright, the young Redskins QB looks set to haunt this division for years to come, and the Giants need to reload with guys who can get after the passer. Werner already has a wide variety of pass rushing moves to boot, and is more than capable of turning the corner. It's unlikely he'll be running anyone down from behind once they're in the open field, but Werner can get into the backfield with the best of them.

playing in the ACC, Werner is already used to defending against the option offense-BlackandGold

More than his speed though, Werner's football IQ is off the charts, and he is extremely stout against the run. He has the ability to read plays and crash down the line in order to stop running backs from getting free. Additionally, playing in the ACC, Werner is already used to defending against the option offense (which may become even more prevalent in the NFC East, with Chip Kelly taking the reins in Philadelphia).