The 2012 Bears made history by joining the 1996 Redskins as the only NFL teams to miss the postseason after a 7-1 start since the playoffs were expanded to 12 teams. BTSC user ddoubleday has the pick.

The 2013 Chicago Bears are a team in transition. For many years, defense has been the hallmark of every Bears team. The great tradition of middle linebackers that includes Dick Butkus and Mike Singletary has for the past 12 years been carried on by Brian Urlacher -- who appears to be on his way out of Chicago (the window is still open, but just barely).

Newly hired coach Marc Trestman is an offensive guru brought in from the CFL, who will place more emphasis on the offensive side of the ball than his predecessor Lovie Smith.

Coming into the draft, the Bears greatest needs are at middle linebacker and on the offensive line (both at tackle and guard). Let's see who the Bears likely had up on their board at the beginning of this draft:

The Bears will likely run to the podium if any of the first five are still there; but that is not the case in this mock, so we're going to take a little time to think about this.

OK, we're back. I'm pretty sure that Lovie Smith would have taken one of the 'backers here (probably Ogletree because of his athletic gifts, or maybe Brown because of Ogletree's off-the-field problems).

But Marc Trestman is all about protecting and enabling his QB (mostly through scheme, but also by getting him blockers and weapons).

Marc Trestman is all about protecting and enabling his QB-ddoubleday

My guess is that Trestman is salivating at the idea of picking up Eifert at TE, even though the Bears already signed Martellus Bennett away from the Giants. But Eifert is a different kind of match-up nightmare from the position, almost like a WR. And the Bears are thin at TE anyway, since both Matt Spaeth and Kellen Davis are gone.

However, Eifert is gone in this mock, and in any case, I think Trestman will reluctantly decide he can make do at TE with Bennett and pick up a development prospect later in the draft. Keeping Jay Cutler healthy is still paramount for the Bears' chances, so... 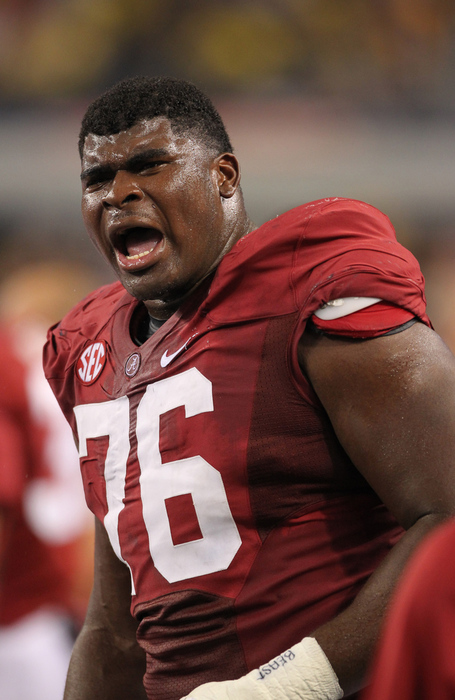 What Trestman probably cannot do is wait for an OT.

What Trestman probably cannot do is wait for an OT.-ddoubleday

Fluker and Watson may both be slight reaches at #20, but the need is great and nobody even close will be available at the Bears' 2nd round pick. The recent acquisition of Jermon Bushrod from New Orleans is not enough - J'Marcus Webb is an enigma who played better last season but still doesn't inspire much confidence, and he'll be competing against former Steelers legend Jonathan Scott at RT. Gabe Carimi was a 1st round pick originally drafted to play OT, but has officially been shifted inside to guard after recovering from a major knee injury. The other guard position is a big question mark, too.

Trestman will then hope that one of the middle linebackers falls to pick #50.

(By the way, my guess is that one of Warmack/Cooper makes it to #20 in the real draft next week.)