The Bengals have been slotted into the 21st pick pick in the draft for the second year running, and BTSC user garmancm has the pick.

Editor's note: Pick was made before news of James Harrison signing with Cincinnati.

When you look at what the Cincinnati Bengals typically do in the draft, it often looks like they take a checklist of their needs, start at the top, and just run straight down it when they make their picks. They tend to focus on filling needs over best player available.

Last season, CB and OG were their two biggest holes: they added CB Dre Kirkpatrick with the 17th pick and OG Kevin Zeitler with the 27th pick, after trading around a little bit in the 1st round. So when selecting for the Bengals, I looked at their biggest hole in the roster... and there's no bigger than the one where Andre Smith was at right tackle.

[The Bengals] tend to focus on filling needs over best player available.-garmancm

Smith's shirtless combine numbers several years ago was a thing of nightmares, and now Smith is playing hardball with the Bengals on re-signing to a long term deal. With the Bengals power-run offense, D.J. Fluker was the perfect fit... until he came off the board just before our selection! I would say that safety is also a top need, and I did consider Matt Elam at this point, but felt like it would be too much of a reach.

When Manny Lawson walked in free agency though, it left an opening at OLB in the Bengals 4-3 scheme. Rey Maualuga has been re-signed (much to the Cincinnati fan base's dismay), but there's been some uncertainty over whether he will play in the middle, or whether Vontaze Burfict will move to that spot.

With the 21st pick in the 2013 NFL Draft, the Cincinnati Bengals select Alec Ogletree, LB, Georgia. 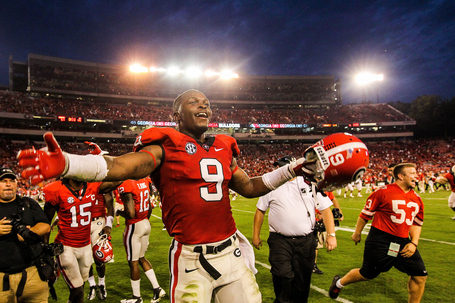 Regardless, Alec Ogletree is easily the most talented player left on the board. He would most likely play on the outside in Cincinnati, but has the versatility to shuffle around if Maualuga continues to struggle. If not for Ogletree's character red flags, he could have been a top-10 pick... and we all know that Cincinnati isn't scared off by that. (This is a team that just signed Pacman Jones to an extension!)