BTSC user Hines4theHall is back for the Rams' second appearance in the 1st round. Grab a drink first - this is about as thorough as we've had so far.

There's a lot to get into in explaining my second pick for the St. Louis Rams, so let's get right into it.

When I selected Kenny Vaccaro for the Rams' pick at No. 16, I purposely didn't discuss the team's needs and coach Jeff Fisher's draft history so I would not spoil the surprise. I also didn't want BTSCers picking from 17-21 to scoop up the player I wanted. (Perhaps I am taking this mock draft too seriously?)

Anyways, having already covered the team's #1 need - safety - with Vaccaro, here's my humble opinion of the team's remaining needs, in ascending order of importance.

Signing Jake Long immediately improved the Rams' O-line, but they could still use an upgrade between the tackles. The team could probably survive this coming season with 2012 5th-rounder Rokevious Watkins (best name in the NFL?) and veteran Harvey Dahl at guard and former Pro-Bowler Scott Wells at center. However, both Wells and Dahl are getting up in years and all three players had injury issues last season, so depth would be of great value.

But outside of possibly Larry Warford, there just isn't good value for interior linemen at this spot. A few other names the team could be targeting in later rounds include Justin Pugh, Alvin Bailey, and Kyle Long (brother of current Rams stud DE Chris). Plus, in 17 seasons as a head coach, Fisher has never drafted OL in the first round, so we'll pass for now.

Since the team lost Danny Amendola and Brandon Gibson to free agency, virtually every mock draft from here to Outer Mongolia has the Rams taking a wide receiver with one of their two first round picks. This makes sense, and the Rams have brought in at least seven wide receivers so far for pre-draft visits (more than any other position), but I think there are more pressing needs.

This is partly because I think the Rams are confident in two young receivers already on the roster: Brian Quick and Chris Givens. Quick and Givens were selected with the first pick in the second and fourth rounds, respectively, last year and played well last season - combining for 53 catches for 854 yards (an impressive 16.1-yard average) with five TDs in limited opportunities. I believe the coaches are confident both players will take a big step up in 2013.

More importantly, the draft is silly with wide receivers this year. DeAndre Hopkins, Quinton Patton, Keenan Allen, Robert Woods, Markus Wheaton, Stedman Bailey, and Justin Hunter are all still available and viable options later on. Add free-agent addition Jared Cook at TE, who the team could try to use like Amendola last year, and there's reason for optimism for the Rams' passing game.

James Laurinaitis is solid in the middle of the Rams' 4-3 scheme, but the team only has Jo-Lonn Dunbar and 2012 undrafted rookie Sammy Brown on the outside. Their D has no problem getting to the quarterback, so a strong run-stuffing OLB would be better value. Unfortunately, OLBs like that are few and far between in this draft year. Arthur Brown would be a decent candidate here, or maybe Sio Moore in round 2.

But after already drafting Vaccaro at No. 16, I can't in good conscience go defense again here with other offensive needs that still need addressing.

So without further ado... 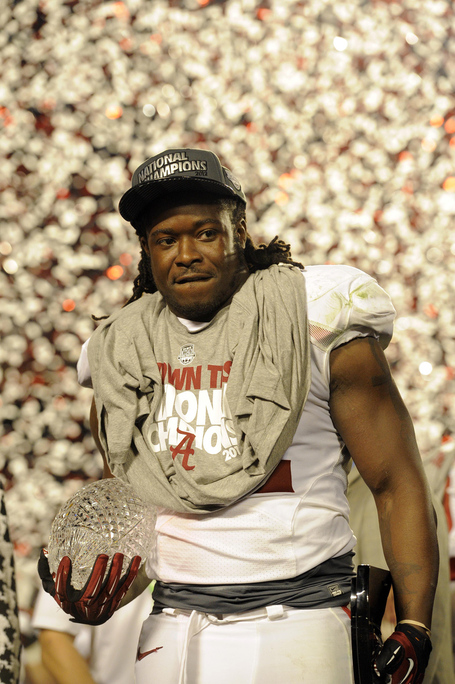 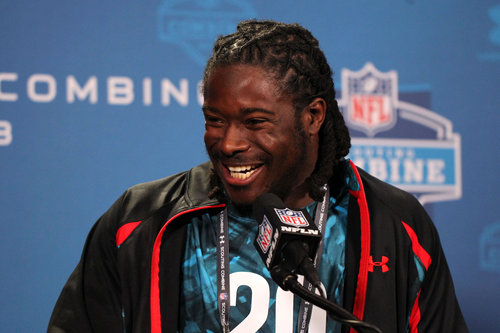 Turf Show Times tries to proactively help their readers, before they smash out their shiny flatscreen TVs in a fit of rage.

I'll give you a moment to wipe off the coffee (or other refreshing beverage) you just spit all over your monitor. If you think taking Lacy is too much of a reach here you're not alone: BTSC's sister site, Turf Show Times, has an amusing survival guide for Rams fans dreading Lacy's name being called next Thursday.

Even though Rams fans tend to agree that Lacy is the top RB in this year's class, and the SB Nation bloggers' mock draft had him falling all the way to the Rams' 2nd round pick (#46 overall), I don't think the Rams can afford to wait until the 2nd round (or later) to take Lacy or one of the other RB draftees. Here's why.

The Steven Jackson-sized hole in the Rams' offense

I don't think a lot of people fully appreciate the void left by Jackson's departure. After nine seasons in St. Louis, he currently stands at 10,135 career yards, good for 26th all-time and #1 among active players. Jackson accounted for 25.9% of the Rams' offensive yardage last year (Givens was second at 13.4%), ranking 16th in the NFL in that category and 12th among RBs. To put that in perspective, he's in the same ballpark as the Texans' Andre Johnson (26.8%) and 49ers' Frank Gore (25.0%). More importantly, no one who was a bigger part of their team's offense last year left their team this offseason.

I don't get to pat myself on the back too often, so I hope you'll allow me this #humblebrag (sooooo 2012):

Last year, I used Fisher's draft history to predict he would take a defensive tackle in the first round. Even though he went with Michael Brockers instead of my pick of Dontari Poe (hey, when you're right 52% of the time you're wrong 48% of the time), the fact that he still took a DT even after trading back means my logic was sound in predicting he was targeting that position.

Fisher drafted 1st-rounders Eddie George (1996) and Chris Johnson (2008), who turned out to be decent backs - so there is some precedence here. While the rest of the league seems to want to move to a running-back-by-committee approach, Fisher has always leaned on a workhorse back. Aside from George and the-running-back-formerly-known-as-CJ2K, Fisher inherited Jackson upon joining the Rams.

The Rams' current RB situation is much like the Steelers' in that they don't have a proven #1 guy. Wishful thinkers are hoping Isaiah Pead (2012 2nd-rounder) and Daryl Richardson (2012 7th-rounder) will be able to carry the load this season, but I don't buy either guy as a future workhorse back. The two combined for less than half of Jackson's carries last year, and neither possesses the build of a typical three-down back.

I identified 2012's workhorse backs as the top-15 RBs based on number of carries, and dug up some interesting stats:

The average weight of these backs was almost 218 lbs. Jackson was the heaviest at 240, and only Chris Johnson and Jamaal Charles weighed-in at under two bills. Pead and Richardson are a svelte 197 and 196 lbs respectively, which doesn't exactly sound like the type of back that can push the pile and get those tough yards between the tackles. Lacy is 231 (which would rank him second on this list, behind only Jackson) and is widely projected as a workhorse back, whereas Pead and Richardson could be considered largely rotational backs.

Lacy will be drafted in the first round.

Ok, so maybe this is a wee bit of a bold statement, but you have to go back to 1963 to find a 1st round where a RB was not selected. Seriously, I looked it up. That doesn't guarantee that one will be taken this year, but it would certainly buck the historical trend. I believe someone will fall in love with Lacy and snatch him up. Why not the Rams?

Who else are they gonna pick?

The consensus is that this year's draft only has about 10-15 guys with a clear-cut 1st-round grade, then about 40-50 with a 2nd-round grade. By that logic, pretty much anyone the Rams take at this point could be considered a ‘reach' by someone. Ideally, the Rams would trade back for a few more picks and take Lacy later.

After being forced to skip the combine, Lacy didn't do himself any favors at his recent pro-day. But much in the same way that teams shouldn't get carried away with a player who blows it up at the combine, a poor pro-day doesn't retroactively tarnish the accomplishments Lacy displayed on game film.

At this point, it's speculative as to whether his poor performance was due to his recent hamstring injury, a lack of work ethic, poor conditioning, or some combination thereof. But if there's any coach that should be able to whip Lacy into shape, it's Jeff Fisher.

The Rams brought Lacy in for a pre-draft visit - so they're clearly interested. Lacy may never become a "dynamic, game-changing back", but he should become a steady and reliable "blue-collar" workhorse. He may never make the highlight reels, but he'll keep showing up on the stat sheet.

This pick may elicit some boos come draft day, but those will become a distant memory if Fisher turns Lacy into his next Eddie George, or dare I say, Steven Jackson.