How should the Colts build upon the surprisingly successful first year of the Andrew Luck era? BTSC user steel3dd92 has the pick.

At this time last year, nobody, not even Jim Irsay himself expected the Indianapolis Colts to be selecting this late in the 2013 draft. This was supposed to be a rebuilding year, but somehow they managed an 11-5 season. The multi-million dollar question now becomes... how do they continue this success?

There are a few different ways they could go with their first pick: cornerback, linebacker, defensive end, and offensive line - just name a few. Some of the best available players left at these positions of need would be OT Menelik Watson, DEs Tank Carradine and Datone Jones, LBs Arthur Brown and Kevin Minter, and CBs Desmond Trufant and Jamar Taylor.

Last year, the Colts binged on offensive players in the draft (8 out of 10 total picks)-steel3dd92

Last year, the Colts binged on offensive players in the draft with eight of their ten prospects selected coming from that side of the ball. And they did manage to mostly build up a young offense around their new centerpiece -- Andrew Luck. Does that mean that the Colts will go on a run of defensive players in this year's draft? I think it does, especially with second-year head coach Chuck Pagano having a defensive background, and with definite room for improvement from last year's performance.

Their defense suffered a great loss when they released long-time legend Dwight Freeney. Although they did sign Erik Walden to a four-year deal in free agency, he cannot be viewed as a long-term solution for the pass rush Chuck Pagano wants from his defenses. The Colts will likely be looking for Freeney's permanent replacement in the early rounds of this draft.

With the 24th pick in the 2013 NFL Draft, the Indianapolis Colts select Datone Jones, DE, UCLA. 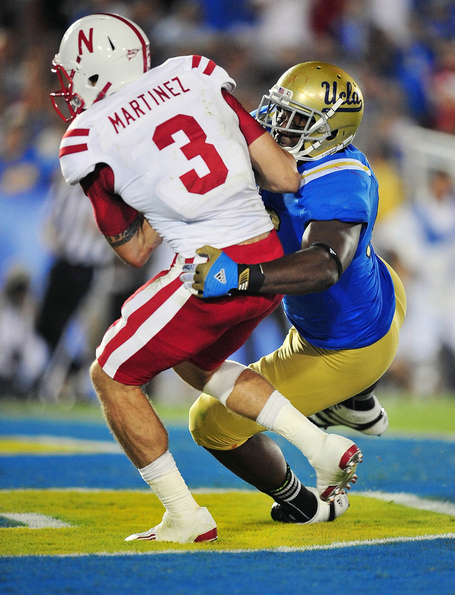 Not only does Datone Jones fit a need here, he is one of the best players left on the board. Ricky Jean-Francois and Erik Walden cannot be trusted to handle the Colts' pass rush this year opposite Robert Mathis. Cory Redding is their only other viable option, but he is 33 years old and may not have much left in him.

Jones is a good hybrid defender-steel3dd92

Jones is a good hybrid defender. The Colts would have the ability to move him to outside linebacker, if needed, or they could keep him on the end. Jones had a very inconsistent college career, but if he were able to gain some consistency, he could become a premier pass rusher at the next level with his initial quickness off the snap. Jones could easily serve as Dwight Freeney's heir. This pick just makes too much sense for the Colts to pass up at No. 24.