Why haven't the Packers made it back to the Super Bowl since their heartbreaking defeat of the Steelers? I actually have the pick here, and am not just posting for one of our participants.

What has happened to the Green Bay Packers' defense?

Since switching to a 3-4 with Dom Capers as the coordinator, the Packers' D has gone from a surprisingly effective first year in 2009, to a championship run in 2010, to a shell of its former self in 2011 and 2012. That might be slight hyperbole, but you get the picture because this is the reason why Aaron Rodgers has been simultaneously getting even better as a QB, yet still hasn't come close to winning a second title.

Cullen Jenkins seems to have been a significant loss for Capers' unit back in the 2011 offseason, and they have yet to properly fill the void.

Jenkins' effectiveness on the defensive line was one of the lynchpins for the success of the Packers' nickel "amoeba" defense. With Jenkins and B.J. Raji up front - and with both effective at clogging space vs. the run and at getting interior penetration vs. the pass - the Packers often rolled with a 2-4-5 set that was incredibly effective.

After their championship run in 2010 - where Jenkins only actually suited up for 11 games during the regular season because of injuries, but still totaled 7 sacks - the defensive lineman cashed in as a free agent and signed with the Eagles.

Green Bay likely thought they had a young piece they could develop for the role when they drafted Jerel Worthy last year -- gave up a 4th rounder to move up eight spots in the 2nd round to select him, in fact. Worthy had some growing pains in his rookie year, but the bigger issue is that he tore an ACL in the final game of the regular season, so who knows when he'll be 100% healthy and back on track with his development as a player.

Screw you, Colts. And your unfathomable late-game rally in Week 5 that somehow turned a blowout loss into a heroic, inspiring victory.

Alright, this may or may not be a funny story:

Michael Uhlhorn made the Vikings picks and with only the Colts coming between their two selections, he actually sent me his Geno Smith write up alongside his one for Sylvester Williams -- since everyone and their mother can guarantee that the Colts will not be taking another 1st round QB.

This was my reply to Uhlhorn:

Dammit, I really was close to making him my guy for Green Bay. Was totally toying with the idea of trolling it and spinning Geno Smith as Aaron Rodgers 2.0.

The Colts guy better not be looking at Datone Jones, otherwise I'm going to be pissed. Might just tell him that straight out when I pass along the picks...

But I didn't. And here I am, Jonesing for Jones. 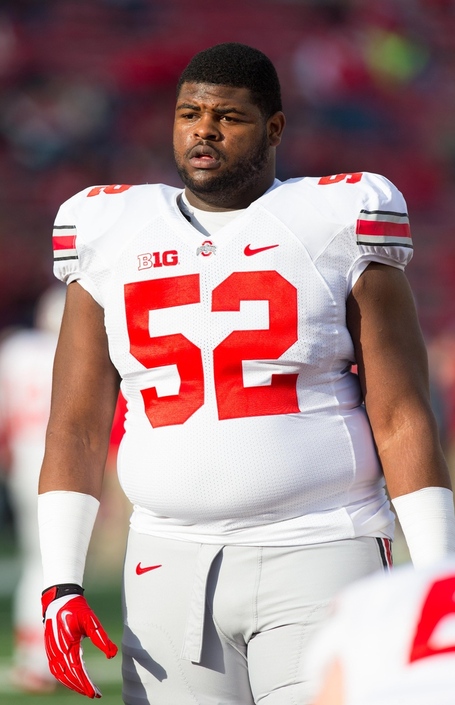 The mass of humanity that you see above has the tools to be something special - great strength, unusual quickness and athleticism for a being his size, great on-field awareness. He can be an absolute force in the NFL, especially if he improves his conditioning so he doesn't noticeably wear down as much later in games.

Alabama's Jesse Williams was also on my shortlist here, but the tiebreaker for me is that Hankins does not have "YOLO" tattooed on his face. (Haven't seen Williams' tattoo? Right here.) Either one could be a great space-eater with the flexibility to play at multiple positions in multiple formations, and that flexibility would also allow Capers to tinker around a little bit and find the ideal spot/role for Worthy once he is healthy again.

I also considered a safety here, as Green Bay still has to account for the void first left by former All-Pro Nick Collins (to retirement after a particularly severe neck injury), and which was occupied for this past season by Charles Woodson (released earlier this offseason). Any of the top safeties on the board - John Cyprien, Matt Elam, Eric Reid - would be good fits here, but the question mark with Worthy's recovery time has me leaning more towards beef for the trenches.

Finally, I would be remiss if I did not mention a potential trade down with a QB-hunting team. The last time Green Bay traded out of the 1st round was 2008, and it paid off handsomely with WR Jordy Nelson near the top of the 2nd.

With a number of good-but-not-great QB prospects this year (Matt Barkley, Ryan Nassib, EJ Manuel), a few teams could absolutely want to trade into the bottom of the 1st round - not just to make sure they get their guy, but to ensure that they can have him for up to five relatively cheap years - and the Packers have prime real estate they could sell.

(The current CBA locks every drafted rookie into a 4-year contract, but with a team option to add on a fifth year for any 1st-round pick. If activated, the price tag for a 5th-year option for a player drafted around here would be the average of just the 3rd through 25th highest paid players of the same position in the league - which makes the team option a real boon for premium positions with particularly hefty long-term price tags.)