The Texans won 11 of 12 games to start the 2012 season, so now what do they need to win in the postseason? BTSC user c63tho has the pick.

The Houston Texans are a very strong team, but they have a few holes lurking in their roster.

Their main threats are Arian Foster and Andre Johnson: these guys are among the best in the league at their position. Complement this with a competent QB in Matt Schaub, and a great O-Line featuring Pro Bowlers Duane Brown, Wade Smith, and Chris Myers on the left, and some combination of Brandon Brooks, Ben Jones, Derek Newton, and Ryan Harris rotating in on the right. It looks like Newton is penciled in as the starter at RT, but he has been inconsistent. While RT might be a good target for improvement, it's not the weakest link on the offense. The offense has a few secondary weapons (TE Owen Daniels, injured WR DeVier Posey), but Houston has been in a long hunt for a third offensive threat to help the Big Two.

The options: Houston - and its fans - have been drooling over a new receiver for a long time, and many Texans fans have locked in on DeAndre Hopkins as their dream target. Compared by some to Roddy White, he's a good height/speed/strength combination with good route running and great hands. He's an experienced, consistent, and complete receiver that should be ranked as the best receiver in the draft, according to my humble opinion. Fortunately for Houston, he's still available at this pick. Other receiving options include the similarly talented Keenan Allen, Justin Hunter, Robert Woods, Quinton Patton - this draft is a great one for a WR-needy team like the Texans.

Wade Phillips runs a very good 3-4/5-2 defense. JJ Watt, the reigning NFL Defensive Player Of The Year, is the absolute star. Next to him on the line are Earl Mitchell at NT and Antonio Smith at DE. Mitchell replaces Shaun Cody, but is not the best option there: the Texans could look to bolster that spot. In the linebackers, 2012 1st rounder Whitney Mercilus takes over for Connor Barwin outside, while Brooks Reed and Brian Cushing keep their spots at OLB and ILB respectively. Bradie James was the other starting ILB, but he was not retained in free agency. Daryl Sharpton is penciled in as his replacement, but he has been in the league for awhile and hasn't shown too much. In the secondary, Kareem Jackson and Johnathan Joseph are locked in at CB and Ed Reed and Danieal Manning are locked in at S. So on defense, the pressing needs are NT and ILB.

The options: The most drool-worthy prospect is inside ‘backer Arthur Brown of Kansas State. Projected as a 4-3 OLB or a 3-4 ILB, he has good speed, strength, intelligence, and coverage abilities. Instinctive and aggressive, Brown is rising up draft boards and I think the hype is well justified. He plays bigger than his six-foot size and he's built like a tank at 240 pounds, and I think his game compares favourably to Jerod Mayo and NaVorro Bowman. There aren't too many other options for ILB - Minter and Te'o are good fits as instinctive ILBs, but they're a tad slow and not as good in coverage. At NT, there's a few prospects available too (Jesse Williams, John Jenkins) but neither appear to be a 1st-round difference-maker. 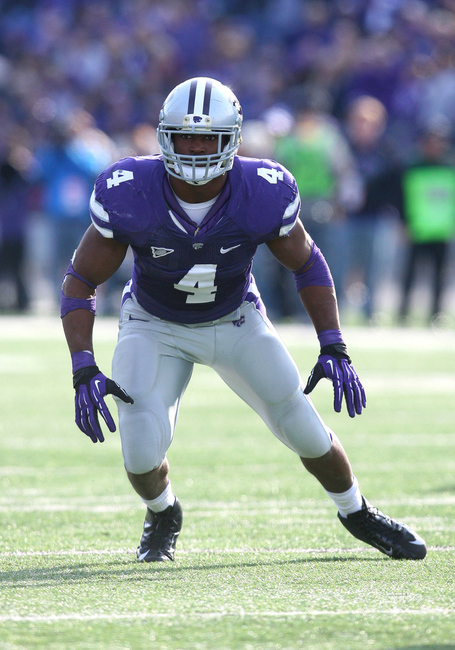 In the BTSC version of the draft, the Texans are extremely blessed to have both their dream targets alive here - Hopkins and Brown. I'd run to the podium for either guy here and they are clear Best-Players-Available here.

However, let's look at a few drafting combinations. If we take Hopkins first, we hope that Minter (or Te'o, though we'd rather avoid him) falls to the 27th pick of the 2nd round. If Minter and Te'o are gone, it's a big step down to the next best options.

In contrast, by taking Brown first, we can wait for a WR play-maker to fall to us at 2.27 - someone out of Hopkins, Allen, Hunter, Woods, Patton, or Terrance Williams should be available. And comparing Hopkins/Minter vs. Brown/Woods, I'd go for Brown/Woods. With the four 1st round-worthy targets likely to be available in the 2nd round, it'd make it a lot easier to trade up and get one of them for a decent price.

Check out BattleRedBlog for more Texans stuff - Brett Kollman's piece on the Texans defense is superb football analysis and is worth a read just as a football fan.