How does missing out on Emmanuel Sanders this year affect New England's plans in the 1st round? BTSC user TrifeReality has the pick.

This was a tough pick for me as a Steeler fan. Frankly, I'd prefer this pick to be taken away from them a la post-Spygate scandal again. But since I have to pick for the New England Patriots, I'll do my best.

I see two positions of immediate need - receiver and safety, and three positions that could use necessary depth later in the draft - nose tackle, offensive tackle, and center.

I see two positions of immediate need - receiver and safety-TrifeReality

At safety, I think the Patriots were very high on Matt Elam. Although somewhat slight in height, Elam packs a wallop that many other safeties cannot brag about. He is a DOG. The signing of Aqib Talib for a second season proves that Belichick is willing to gamble a bit on talented playmakers to try to rebuild the secondary. However, Elam was just snatched up by the Broncos - so let's turn to receiver.

New England hasn't had a big receiver worth anything since Randy Moss. Then this past year, they experimented with then parted ways with Donte Stallworth (who had just a single catch last year), and Brandon Lloyd (who is not a top target anymore). And then there was the public debacle with Wes Welker that saw Tom Brady's favorite target take a trip to Denver instead of re-signing.

The Patriots did just sign Danny Amendola in free agency to a long-term deal, but he's more of a move-the-chains guy. Meanwhile, Julian Edelman is..............cute. And they do not make a particularly sexy starting duo. 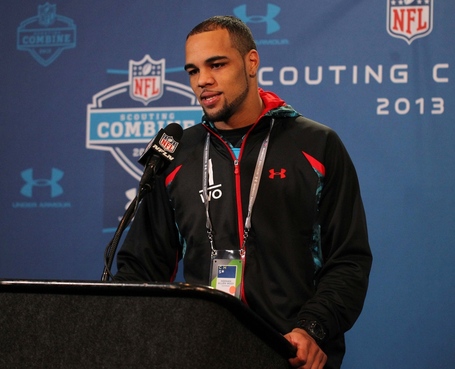 Keenan Allen is a big, disciplined route runner who is great at positioning his body. Good long speed and attacks the ball at the highest point. Allen needs help with blocking, but that's coachable. He gets low very fluidly and sinks his hips in his route running - not a lot of wasted motion. I think he's the next Marques Colston with more explosion.