Remember when the Falcons had a 17-0 lead that was 24-14 come halftime, before getting shutout in the 2nd half and allowing the 49ers to move on to the Super Bowl? BTSC user MDR21 has the pick.

This pick could have gone in a lot of different directions. With the releases of OT Tyson Clabo, DE John Abraham and RB Michael Turner, and the uncertainty surrounding the return of TE Tony Gonzalez, there were a lot of holes to fill on a team that is built to win now.

Those questions marks were addressed in pretty rapid fire -- the return of Gonzalez, the signing of former St. Louis workhorse Steven Jackson at RB, and the signing of Osi Umenyiora at DE (although the latter may be a situational player only).

This franchise is desperate to win it all now-MDR21

One train of thought for the Atlanta Falcons would be to target the best value (say, if a Tyler Eifert had been sitting here), especially if Gonzalez had not returned. This franchise is desperate to win it all now to legitimize their investment in Matty Ice, and also the significant trade up for Julio Jones in 2011. 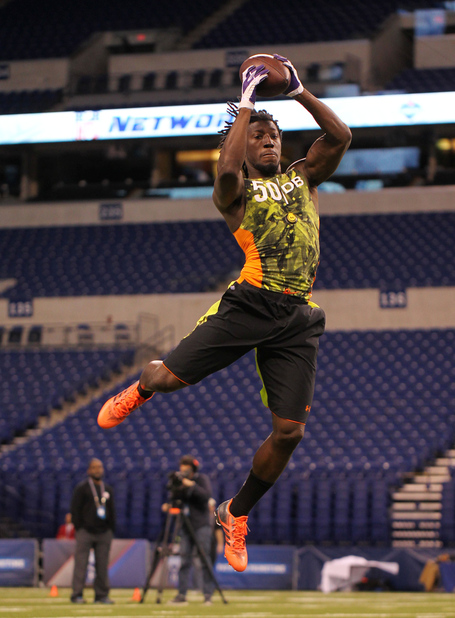 This pick basically boiled down to a pass rushing DE or a CB, and Desmond Trufant represents tremendous value here at #30 AND fills a tremendous need.

With Brent Grimes gone to Miami and Dunta Robinson released and signed in Kansas City, the Falcons are down to just Asante Samuel and a bunch of guys at CB.

Trufant's pro day stats are impressive, and most importantly, align with what you see on tape:

Trufant is likely a plug and play starter from day one, a probably a key piece to watch if the Falcons are eventually able to make it to the Super Bowl next year.