We're almost to the end of our 2013 community mock draft, with just one pick left to go after this! BTSC user afbassi is up here.

The San Francisco 49ers are expected to use their extra picks to trade up in the first round, but let's play by the rules of our community mock draft.

The 49ers don't need any instant replacement players right now, but rather some pieces to develop and turn into starters in the future. This will probably be reflected in their picks.

One of the biggest issues in this coming season is the situation of Justin Smith. He's getting older and soon may not produce as well as he has the past few years. Add in the fact that 2013 is the final year of the six-year $45 million contract he has, and we may think it would be a smart thing for GM Trent Baalke and head coach Jim Harbaugh to grab a defensive end in the first round.

There are many options on the market:

On the offense, I don't think they need any "first-round quality" pieces, but maybe a tight end would be a plausible choice. Although Tyler Eifert's draft stock is higher, Zach Ertz would also be a good addition to the team, since he has already worked with Harbaugh in Stanford.

With all this in mind...

With the 31st pick in the 2013 NFL Draft, the San Francisco 49ers select Cornellius "Tank" Carradine. 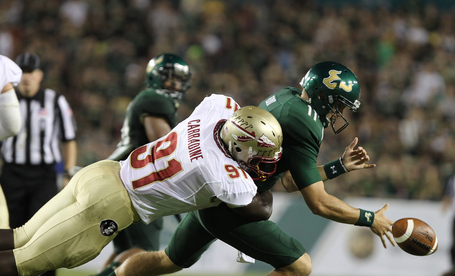 Tank Carradine played right end in the Seminoles 4-3 defense, but that wouldn't be a problem in the 49ers 3-4 scheme - he has enough size and athleticism to be a good replacement for Justin Smith when needed. And if Carradine's ACL heals up fine, his pass rush abilities could be a fine alternative threat to Aldon Smith.