Notre Dame tight end Tyler Eifert draws favorable comparisons to Pittsburgh's Heath Miller, and while he's a solid prospect, he's not as explosive as some say he is.

Tyler Eifert has been an offensive weapon for the Fighting Irish for the last two years. In 2011 he had 63 receptions 803 yards and 5 TDs. In 2012 his production diminished slightly due to teams planning for Eifert more easily with the loss of Malcolm Floyd to the NFL. He still had 50 receptions for 685 yards and 4 TDs. Eifert was the team captain for Notre Dame and displayed his team first attitude on and off the field. He capped off his college career winning the Mackey Award in 2012 which is given to the nations best tight end. 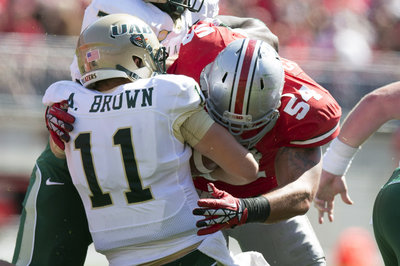 BTSC's draft writers break down several other players in preparation for the draft, which starts tonight in New York.

Tyler Eifert is 6-foot-6 250 lbs tight end with 33 inch arms. On tape Eifert's exceptional hands are on display in nearly every game. He will routinely catch the football away from his body and is strong enough to make the catch in traffic. His awareness in zone coverage is on par for most tight ends and he is a player who will give his full effort on every play. Eifert has average long speed running a 4.65 forty yard dash but truly excels when he has to go up and fight for the football. His 35 inch vertical leap and body control usually allow him to come down with the football in a jump ball situation. Eifert's ability to track and high point the football might be the best of any payer in this draft and is illustrated in just about every game I have watched of his.

For a tight end Eifert isn't a horrible blocker and has really improved in this area over the coarse of the last year. He gives his full effort sicking his face mask into the chest of the defender and trying to latch on. He does a decent job of maintaining his leverage through contact and can drive safeties and some linebackers off of the ball.

Eifert's game is well rounded but far from perfect. He isn't a very explosive athlete and will find difficulties getting separation on routes other than the seam. In and out of his breaks he will slow down and allow defenders to catch up to which leads to the need to make a catch in traffic. Eifert is an average athlete for the tight end position. While he can stretch the field against some linebackers, he should not be confused with players like Vernon Davis or Jimmy Graham as a receiver. His routes have improved but he does telegraph them some what and needs to clean up his footwork. As a blocker Eifert will lunge too often at his target and lean to make the block. This will cause him to loose the leverage battle.

Eifert's ability to track and high point the football might be the best of any payer in this draft and is illustrated in just about every game I have watched of his.

Tyler Eifert is a well rounded tight end leaving the Notre Dame program. He is a natural receiver who excels in tracking and high pointing the football. He has strong hands and can make the catch in traffic and through contact. He is an incredibly reliable receiver. For a tight end is blocking is pretty good. He will give his max effort in his blocks and will do everything he can to prevent his defender from making a play. While Eifert isn't the explosive offensive playmaker some have touted him to be (especially one analyst who is on the NFL Network and is notorious for over-rating Notre Dame players because he does the play-by-play for Notre Dame during the season and everyone takes his word as law in the draft communities) but Eifert is a very good player who should helpa NFL team immediately. In a weak draft class Eifert will probably go in the top twenty but had he entered the draft last year in a much strong class, I don't think he would have been drafted before the Colts Colby Fleener. Eifert's size, frame and well rounded game can't help but have me compare him to Heath Miller of the Pittsburgh Steelers. Like Miller, Tyler Eifert is a good but not great blocker, has strong reliable hand but is more a a security blanket for a QB than a player who can stretch the field.