The Steelers now have an abundance of outside linebackers. If the 2013 NFL Draft has shown us anything, it is that you can never have enough guys to rush the QB. How can the Steelers use all of the guys at their disposal?

One of the most intriguing questions going into 2012 training camp was what the Steelers were going to do with Sean Spence. Could Spence, because of his lack of ideal NFL linebacker size, become an eventual replacement for Troy Polamalu?

The question is not as simple as it seems. Everyone knows that the Steelers employ a complex zone blitz package. There are two major components to a zone-blitz defense: the "seam-curl-flat" player and the "middle hole" player.

If the scuf player does his job well, it allows a defense to keep their safeties high to defend against vertical routes. Keeping two safeties high also allows them to be force players against the hottest offense in the NFL -- the read-option. In order for the scuf player to be effective, he has to be able to read patterns and react accordingly, and he also has to be able to rush the quarterback. The ability to rush the QB from the slot causes fits for offenses. But then if the scuf player doesn't blitz, the defense has a man-advantage on the offense in coverage (scuf, corner, and deep safety in coverage vs. two receivers, with the "middle hole" player getting involved if they're in a trips formation).

Jones a Steelers kind of guy 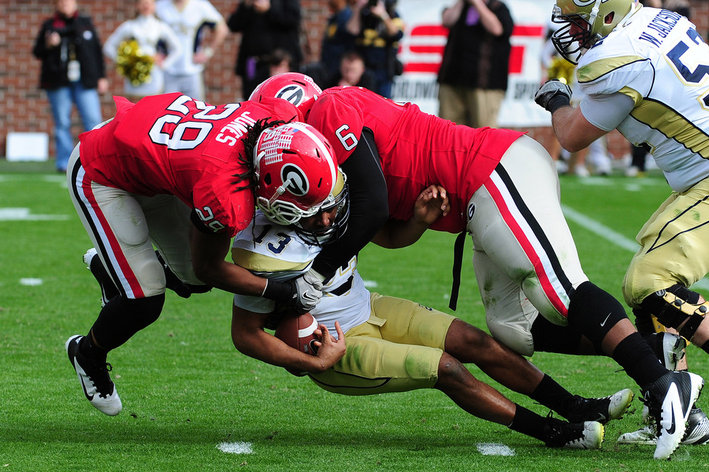 Hard-working, gutsy and productive. Jarvis Jones is a Steelers kind of guy.

The other player I was mentioning was the "middle hole" player. Lawrence Timmons now plays this role for the Steelers. This player has to be able to cover a TE down the middle of the field, pick up a crossing route, and also react to the run.

What I am describing here is the modern day 4-2-5 defense that just about everyone plays in college, and the Steelers have used a lot in Big Nickel situations. With this defense, the Steelers have a ton of options.

Troy has dropped down in the slot and has played the scuf position as well as anyone. Remember him jumping the out route against Atlanta in the opener a few years ago? We have all seen him bait quarterbacks into throws. James Harrison has also done this with Troy playing high. If you remember the Tennessee game from last year, you remember Harrison not getting a jam on Jared Cook as he then ran unmolested across the field for a huge gain.

Jarvis Jones can play both the scuf and the middle hole player in our Big Nickel defense. Foote did a good job blitzing on 3rd down last year, but I think Jones is an upgrade. Also, Jones can play the scuf player (and if Spence comes back, he may be able to play there also) and either drop or blitz.

The Steelers have still more flexibility. A few times last year, Cameron Heyward played the DE (with his hand down) in the Big Nickel, and he is a presence rushing the quarterback. Brett Keisel, Steve McLendon, and Ziggy Hood can all play on the interior. Jones can start on the edge then drop in the middle, and Timmons can blitz. Heyward can get bumped inside and Jason Worilds can rush off the edge. Getting Worilds, Jones, and Woodley on the field at the same in the Nickel defense makes the Steelers equally stout against the run and the pass.

Jones is a high motor and high character player that has done nothing but produce. Production in terms of sacks and tackles for loss. He can bend, and he has great short area quickness and explosion. He can also do what Harrison could no longer do - which was be effective dropping into coverage. His ability to play in coverage allows the Steelers to get more athletes on the field and keep both Troy and Ryan Clark on top of the defense. That also helps to extend both of their careers.

Either directly or indirectly, adding Jones is going to help our defense do the one thing it did not do last year -- make game-changing plays.