Share All sharing options for: Steelers 2013 First Round Pick: Breaking down Jarvis Jones

Jarvis Jones came out of high school and went to play for Pete Carroll's USC Trojans. As a true freshman in 2009 he saw some special teams playing time and notched 13 tackles and 1.5 TFL before suffering a neck injury in his eighth game. Pete Carroll then left for the Seatle Seahawks, while USC doctors would not clear Jones to continue playing at USC. Jones found his way to the University of Georgia where doctors did clear him to play. His first season with the Bull Dog was 2011 and he quickly established himself as one of the nations best collegiate pass rushers amassing 70 total tackles, 19.5 TFL 13.5 sacks and 2 forced fumbles. In 2012 he looked to improve upon these stats and he put up 85 tackle, 24.5 TFL, 14.5 sacks, 1 INT and 7 forced fumbles despite missing two games with minor injuries.

At the combine Jones cleared his biggest hurdles. The first was that through medical examinations his spinal stenosis (narrowing of the spinal column) was considered far more mild than originally thought. The second was numerous medical opinion that concluded that the serious neck injury that Jones suffered at USC was not related to his spinal stenosis and has not increased his chance of receiving an injury in the future.

Jarvis Jones fits the physical mold for outside linebackers that the Steelers look for. He is 6-foot-2 245 pounds and has impressive 33 inch arm length. When starting with Jones' strength look no further than his pass rushing ability. While I have maintained that Jarvis Jones' jump off of the line isn't on the elite level but it is very good and he multiplies his quick first step with a great ability to time the snap count. He does a good job of moving quickly while eating up turf. It is a common rule when evaluating a pass rusher that you want to see them take five steps to get to the QB, which means on step three Jones should be in position to tun the corner—which Jones is. Jarvis' preferred move is the double handed slap and he uses it frequently to get the opposing player's hands away from him.

Jones also displays excellent awareness of where the football is and will attempt to strip the ball when he has secured the play. With 28 sacks in two years in the SEC Jones clearly knows how to get to the QB.

There are other strengths of Jones' play that don't get publicized. Jones excels at engaging and looking past his blocker and into the backfield. In the running game Jones will extend his long arms to increase his ability read the play and get off of the block. His hand placement when engaged inconsistently on the inside of the blocker allowing him to gain leverage. Once this aspect of Jones' game is noticed it isn't to realize why a slightly undersized linebacker still had 44 TFL in two years in the SEC. 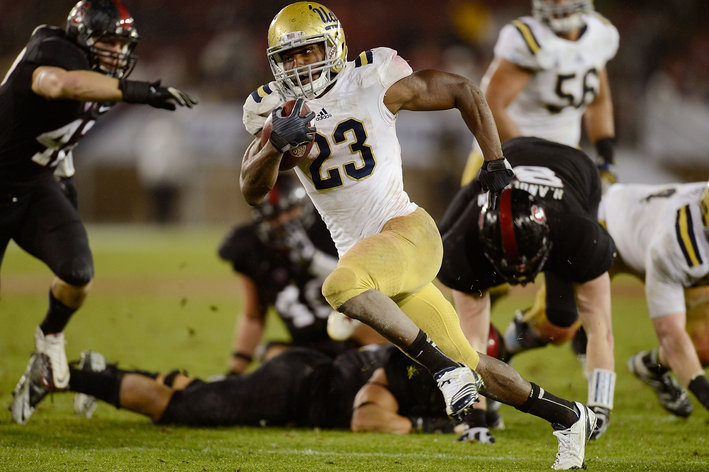 The second and third rounds of the 2013 NFL Draft get underway Friday. Who will the Steelers be looking for with these picks?

Field awareness was also surprisingly good and something that goes unnoticed the first time watching his tape. In coverage he is better than many people give him credit for. In zone coverage he recognizes routes and utilizes his short area quickness to his advantage. Jones also displays his understanding of team defensive concepts. On many of his games you can see where he understands how to prevent the running play form getting to the outside of hims and he will use his quickness and arm length to do this. Jones' doesn't shoot the gaps to make the play; he patiently reads and will allow the play to unfold to prevent him from being out of position.

Once again this analysis will begin with Jarvis Jones' weaknesses as a pass rusher. As mentioned he doesn't have an elite burst off the line of scrimmage and when turning the corner he will occasionally show some stiffness. His biggest weakness as a pass rusher though is his constant avoiding of contact. Jones will time the snap count and consistently cross the face of the tackle however he will the prefer a pass rush move that has him take a much wider angle to get the QB. Against OTs with longer arms like DJ Fluker this strategy proved futile. Jones needs to develop his rip move but likely didn't utilize this move because of his lack of strength. This brings me to Jones' next weakness his lower body strength. A common misconception is that pass rusher need strong upper bodies but it is the legs of a pass rusher that need to be able to hold up the players weight and resist the force from the blocker so that the pass rusher can rush at the most effective angle to the QB. Jarvis Jones will use his length against the run to be successful but against tackles his play against the run was inconsistent because a lack of lower body strength. When he couldn't use his quickness to get off the block he was push out of the way by the blocker far too often. If Jarvis Jones is going to be successful as a run defender he will need improve his strength.

Jarvis Jones is a natural pass rusher. While he doesn't display an elite burst off of the line he makes up for this with great timing of the snap. He is a player who utilizes his ideal arm length to read and react to offenses and as a pass rusher understands how to keep himself clean as a pass rusher. In my opinion Jarvis Jones will not be in the same caliber of pass rusher as Von Miller and DeMarcus Ware. However I do see a player with the potential to be in that next tier of pass rusher and produce similar to LaMarr Woodley. This production can be exponentially increased when paired with an elite 3-4 defensive end, as Aldon Smith has demonstrated. If Jones can improve his lower body strength, which should improve his burst off the line and run defense, and develop his rip move then the Steelers may have got just what they wanted from the seventeenth overall pick, a consistent pass rushing threat.