Colbert: 'It's an honor' to have Jarvis Jones

Share All sharing options for: Colbert: 'It's an honor' to have Jarvis Jones

With speculation abounding, the way it does before the draft, the Steelers ended up landing a player for whom, if nothing else, general manager Kevin Colbert seems to have a healthy amount of respect.

In his press conference after the Steelers selected Georgia outside linebacker Jarvis Jones, Colbert extended the amount of praise normally used for a pick of that stature.

"He definitely is one of the guys I talked about the other day as being a special player in this draft," Colbert said, as quoted by the Post-Gazette. "He's a solid kid, a great player. He was dominant at a major college. He plays the run, chases the ball and, most important, he gets after the passer.

"It's really just a great honor to have this kid join our team." 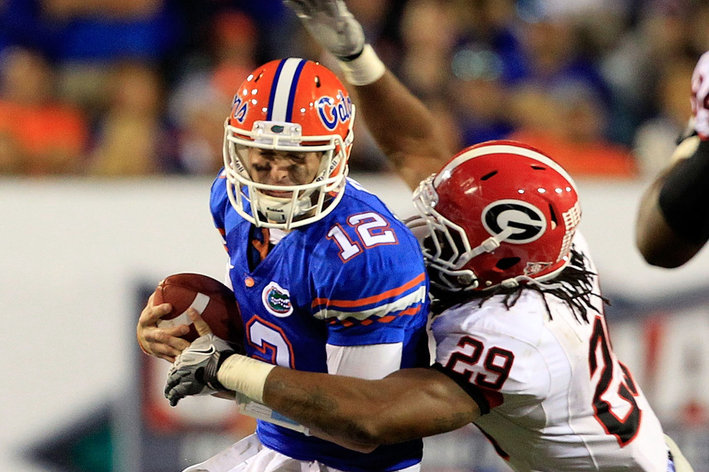 Steelers coach Mike Tomlin appeared equally impressed, particularly about what seems like an easy transition from his role in college to the one he'll play in the NFL.

"It was a fun and easy evaluation. You look at the outside linebackers in the 3-4 defenses, usually there's a projection involved. This was an easy projection ... very little guesswork.

"He excelled in what they asked him to do and he'll be asked to do similar things here."

The Steelers enter the 2013 season with veterans LaMarr Woodley and Jason Worilds slated to start at their outside linebacker positions. Woodley has struggled with injuries the last two seasons, but has been highly productive when he's healthy. Worilds has shown some flashes here and there while battling some injury problems of his own. He's in the final year of his rookie contract.

The Steelers cut longtime starter James Harrison this offseason after he declined a salary reduction to stay with the team. He has since signed with AFC North rival Cincinnati.

Jones is aware of Harrison's legacy in Pittsburgh.

"I think we both play relentlessly. You can tell how much passion we have for the game the way we play."