Jarvis Jones gets his jersey number from the Steelers

Share All sharing options for: Jarvis Jones gets his jersey number from the Steelers

The Steelers have begun sales of the jersey of 1st-round pick Jarvis Jones - he will wear No. 91, the same as former Steelers defensive end Aaron Smith.

Even for a man who already knows he's going to be measured against the outstanding work of James Harrison.

Smith was widely considered one of the best 5-technique defensive ends in the NFL during his time in Pittsburgh. He was a member of all three Steelers' Super Bowl teams from 2005-10, and was given a ceremonial retirement celebration during training camp in 2012. 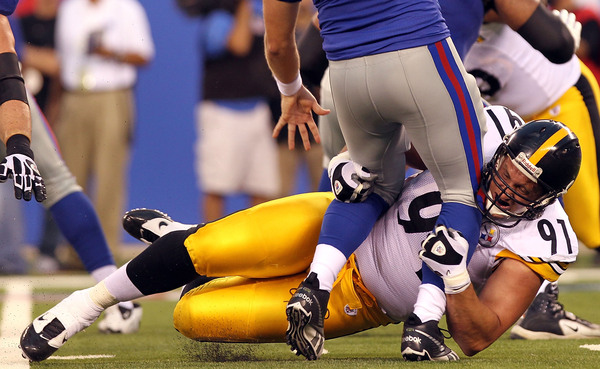 Once upon a time, our editor Neal Coolong got a chance to interview Smith, before he was a Steelers great

Jones, who will be an outside linebacker for the Steelers, comes in much more highly touted than Smith did - who was just a 4th-round pick out of Division II Northern Colorado in 1999. Smith was a defensive tackle while at (the other) UNC, but found himself in a starting role in just his second season with Pittsburgh.

There may be some similarity in their situations: while Jones can't be seen as a starter right now, the contract of former 2nd-round pick Jason Worilds expires at the end of this season. The selection of Jones 17th overall in the 2013 NFL Draft may make retaining Worilds a bit more difficult.

That would be somewhat similar to what happened to Smith (albeit from the opposite perspective), who eventually was pushed out due to injuries and the selection of two defensive ends in the first rounds of the 2009 and 2011 drafts (Ziggy Hood and Cameron Heyward, respectively).