What can Markus Wheaton add to the Pittsburgh Steelers offense?

It is no secret that the Steelers are currently thin at receiver. What can the new 3rd round draft piadd to a passing game that needs to produce more big plays in 2013?

Share All sharing options for: What can Markus Wheaton add to the Pittsburgh Steelers offense?

It has become a cliche to say that Mike Wallace can "take the top off a defense". We all know that Wallace is fast, and the threat of him stretching the field vertically certainly causes strain on a defense. However, even with that threat, the Pittsburgh Steelers' offense has not been able to consistently produce a lot of points and a lot of big plays.

Markus Wheaton - the Steelers newest 3rd round pick - seems to be the type of player who can elevate our passing game.

What is one of the biggest differences between being a QB at the college level and in the NFL?

Some of the most prolific offenses in college football have quarterbacks that will never throw a pass in the NFL. These guys are often called "system quarterbacks," a term of derision.

But I always thought of it in this context: what is the system that they are running that allows them to score a bunch of points with inferior talent at quarterback? The reason why these quarterbacks cannot make it in the NFL is because of the lack of a big arm. With the placement of the hash marks in the NFL, you have to have a big arm to throw a 15-yard out.

Remember, it is not actually 15 yards through the air. The receiver is running 15 yards up field, but if you drew a line between him and the quarterback, that line would be the hypotenuse of a right-angle triangle. In other words, draw a straight line from the wide receiver to the quarterback pre-snap. Then, draw another line for the receiver's 15-yard pattern. Connect the receiver and the quarterback and you have a right triangle. As Pythagoras showed us a long time, the throw covers a lot more distance than 15 yards.

Wider hash marks in college mean that depending on where the ball is snapped from, some sideline throws can be much shorter and easier for QBs with weak arms than others, even though the yardage gain may be the same.

How does this relate to the Steelers and their franchise QB?

Ben Roethlisberger has a good arm, but I would not say that he has a cannon attached to his shoulder. Also, he does not throw the deep ball with a ton of accuracy. That is why I could never understand why so many people are demanding that we draft someone that can take the top off of a defense.

What we need is a quarterback and a wide receiver that are on the same page and are able to take advantage of what the defense is giving them.

For example, let's say the Steelers want to run vertical routes with four receivers. Let's also say the defense is playing with two high safeties. Now, if it was 3rd-and-forever, the defense would probably place a DB underneath each receiver - essentially bracketing the receivers high and low, which leaves them with only five defenders in the box.

As such if it is 3rd-and-8, they probably wouldn't do that - instead, they would probably bracket the most dangerous slot receiver, or the corners could play the flats and leave the safeties deep. That allows you defensively to keep more men in the box.

Being on the same page

Here is where the receiver and the quarterback being on the same page comes in - if the receiver does not have a defender within 6-8 yards, but instead has one playing deeper, the receiver is "capped". As a result, it would be pointless to try to run a vertical route and get past that defender. Therefore, on 3rd-and-8, if the defender stays in their backpedal and keeps their cushion, the receiver should snap the route off around 10 yards.

If the defender breaks their backpedal (because they want to react to the 10-yard route and defend the sticks), the receiver can now take the deep route. "If he breaks it, you take it." Incidentally, that is exactly what Antonio Brown did against the Ravens in the playoffs a few years back. Why a DB would break his backpedal on 3rd-and-forever at that point in the game is a great question. 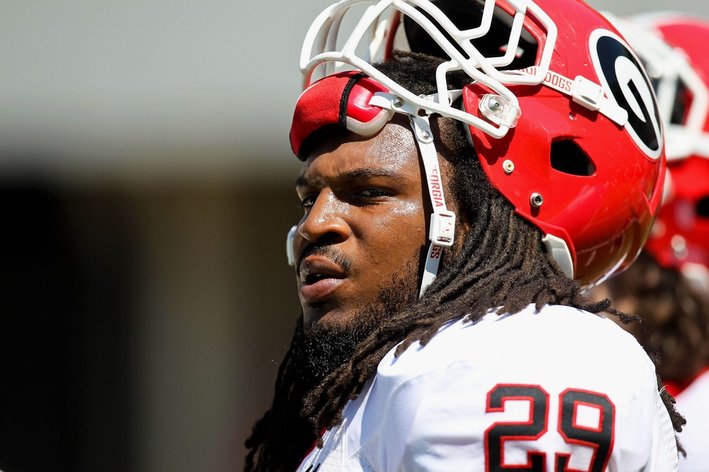 How Jarvis Jones can immediately contribute to the Steelers' defense.

(By the way, if you remember my article from yesterday on nickel packages, this is what Troy Polamalu does incredibly well. He literally just sits there squared up and baits the QB to throw. Then, he has a quick enough burst to still disrupt the throw.)

Thankfully, Troy plays for us - most mortal defenders have to cheat with their hips. If the slot receiver reads this correctly, he is able to adjust his route to the space that the defender is giving him. If the receiver does this well, not only will it allow him to get open, but it will also essentially eliminate the possibility of the underneath defender getting in the way of that 10-yard out that other receiver is running.

What does this all mean for Markus Wheaton?

Wheaton has a good attitude, and good tools. He was willing to play special teams, and he put up 20 reps on the bench press (tied for 3rd among receivers at the Combine). Those things tell me he is a football player. He was a captain for Oregon State, and seems to be a high character guy. And hopefully his character will allow his physical traits to flourish.

The fact that he is not quite as fast as Mike Wallace really isn't a big deal.