Le'Veon Bell and Markus Wheaton are nothing, if not experienced.

Share All sharing options for: Steelers Depth Chart: How Le'Veon Bell and Markus Wheaton will fit with Steelers offense

One thing both Michigan State's Le'Veon Bell and Oregon State's Markus Wheaton have in common is production.

Neither of these players are unfamiliar with the game. They aren't the generally raw products in need of some serious fine-tuning.

Le'Veon Bell, the Steelers second round pick, is nothing if not experienced. After carrying the ball an NCAA-high 382 times this past season, running backs coach Kirby Wilson gets a product that already has a good amount of experience. Granted, that can be seen as a double-edge sword, but looking back at recent Steelers' running backs, Rashard Mendenhall was very young with only one full season of work. The two running backs likely to start ahead of him on the depth chart, Isaac Redman and Jonathan Dwyer, were both seen as project kinds of players. 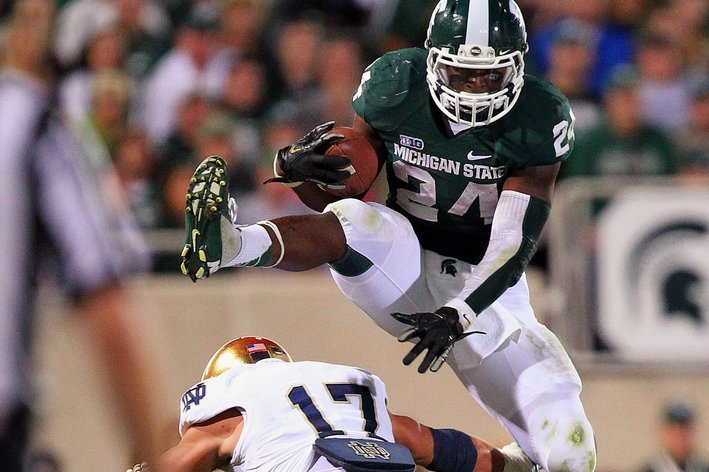 Wrapping up the career of Michigan State's Le'Veon Bell from the Spartans' SB Nation site, The Only Colors.

The Steelers won't have that to worry about with Bell.

Wheaton isn't much different. "Prolific" is a fair word to use for the Oregon State product. He has the Beavers' school record with 229 catches over his four years there, and ranked in the top 10 in six of the seven drills in which he participated at the Combine.

There is a floor with both of these players too. Bell is more quick than fast (although he did post a strong 4.52 40-time), and he already has a significantly high amount of carries. Wheaton isn't particularly big, and doesn't seem like the commanding outside-the-numbers presence the Steelers are lacking at the moment.

As of now, it appears both would have a reasonable chance to crack the regular rotation at their respective positions. Bell's size could get him involved in short-yardage early in his career, and Wheaton is the kind of inside route runner offensive coordinator Todd Haley would love to have at his disposal.