Lots of steak, low on sizzle in this year's draft class, and it appears that's exactly what the Steelers were hoping to get.

Share All sharing options for: Steelers 2013 Draft Results: Taking a look at the nine players drafted

If the 2012 Steelers draft class was the sizzle, its 2013 counterpart is the steak.

David DeCastro, the team's first round pick in 2012, cannot be defined by anyone as a "sizzle" kind of player, but the highly touted guard was a surprise selection. This year's first round guy, Georgia's Jarvis Jones, was neither a surprise nor a highly touted prospect. He's a solid character high-level leadership kind of guy.

And he's the perfect leader for a draft class that looks, on paper, to be specifically designed to re-establish a leadership base that was depleted within the team over the last few years.

Running back Le'Veon Bell does not have the flash and speed of last year's fifth round pick, RB Chris Rainey. Bell also has a job, while Rainey does not. Rainey has elite level speed, but Bell is the consistent "put the team on his back" kind of player that Rainey is not.

Wheaton is a high-production, high-speed and high character receiver, something the Steelers did not appear to have with the previous "Young Money" regime.

Keep in mind, none of this says these players will come in and start. In fact, Jones, Bell, Wheaton and the first of two fourth-round picks, safety Shamarko Thomas, are the only ones who can legitimately expect to see the field right now, and barring injury, Bell is the only one who might compete for a starting job from the start of training camp.

All of them, however, have reputations as leaders and as high character guys.

Steelers Pre-Draft Visitors: Where did they all end up? 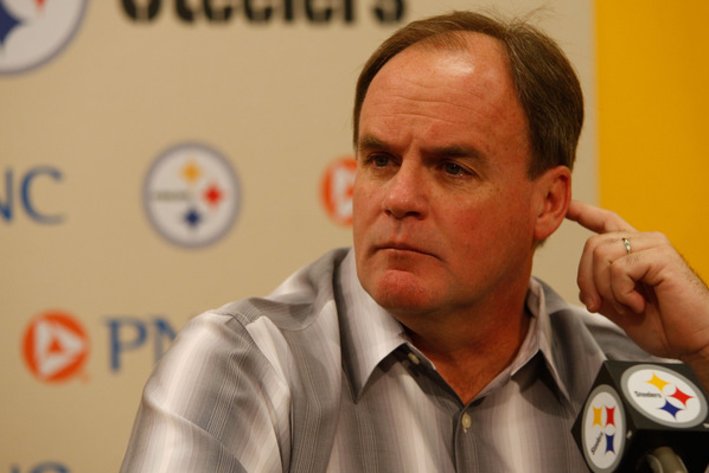 Barnerburner tracks all the players the Steelers reportedly met with before the 2013 NFL Draft.

Fourth round pick Landry Jones is picking up the headlines this morning, and perhaps rightly so. His fall from grace is attributed to a lot of things, and certainly, he's not being asked to start tomorrow. His track record in terms of production, his calm demeanor and his arm strength (contrary to the opinions of some, is plenty adequate for the NFL) give him a solid foundation off which to build. He wasn't drafted to replace Ben Roethlisberger, he is being groomed to be able to fill in as needed down the line. He isn't likely to be the back-up in 2013.

Fifth round pick Terry Hawthorne has some decent physical tools, and the size the Steelers love in their cornerbacks. He may not be the greatest turn-and-run corner, and while his length gives him an advantage, his ceiling may not be any higher than the team's nickel role. I see zero problem with taking a guy like that in the fifth round. The Steelers nickel back is on the field plenty often, and it has been that way for the last four years. It's not going to change this season, or, presumably, in the future.

Wide receiver Justin Brown has the length of an NFL receiver, and he seems competent enough at the college level to have put together fairly decent stats. Perhaps another lower ceiling player, but within a receiving unit cursed with both age and inexperience (and too few younger receivers with experience), getting an opportunity to get on the field and compete wont be too difficult. He isn't someone to cast off right now.

Vince Williams, the quintessential vocal and emotional leader linebacker type, could be a training camp shot in the arm for a defense that needs to begin looking for leadership. Williams performed well at the Senior Bowl after not being invited initially. It's hard not to love a guy who was passed over, later was added and seized his opportunity. Odds are outstanding Williams doesn't get drafted if he doesn't get that late invite to the Senior Bowl, and even less likely are his chances of getting drafted if he went to the Senior Bowl and sucked.

Call me cheesy, but I love players like that. Rip him all you want for being a two-down player and applying the same kind of evaluation on a sixth-round pick as you would a first, but he has intangible value. He's the one I'm most looking forward to seeing on the field.

The Steelers love the developmental projects in their nose tackles and 5-techniques. Samford's Nic Williams appears to be just that. So we'll see what happens there. Seems like he's destined for the practice squad, which is fine.