BTSC readers give Steelers 2013 Draft a B

Share All sharing options for: BTSC readers give Steelers 2013 Draft a B

As it turns out, a random poll of nearly 2,000 readers (note: that is below the standard three percent used for sample measurements) suggests the majority of readers of Behind The Steel Curtain also give the Steelers' draft a B,

Of those readers, 58 percent of them give the draft a B grade, with another 24 percent giving it an A. 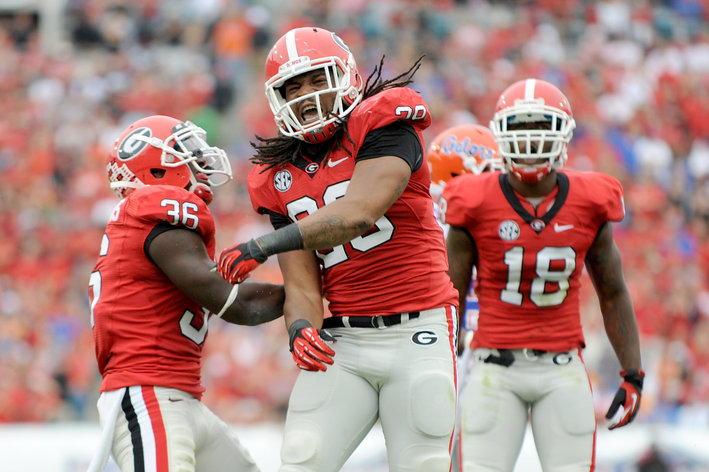 Vote on the quality of the nine players the Steelers selected in the 2013 NFL Draft.

That's a pretty outstanding percentage of readers who placed the draft in an area of above average to outstanding. Or, more to the point, only 15 percent said it was average or worse.

It's not entirely clear how many teams a few days after their drafts suggest their team did worse than the B range, but it's important to measure these things.

The conversation within the comments seem to focus on what we know about spinal stenosis (and the suggestions of medical professional weighing in on the topic were wrong about the existence of the injury within first round pick Jarvis Jones), the passing on linebacker Arthur Brown and the selection of Le'Veon Bell both over Brown and Alabama running back Eddie Lacy.

A report surfaced Sunday suggesting Lacy was taken off the Steelers' board due to injury.

We may never know where fan favorite Arthur Brown was on the Steelers' board. All we can logically deduce is Bell and/or the running back position was rated higher than Bronw/inside linebacker.

Comments seem to generally favor third round pick Markus Wheaton. He seems the pick with the least amount of skepticism from readers. That's not entirely the case for Landry Jones, the Oklahoma quarterback the Steelers selected with the second of two fourth round picks.

Some question Jones' mental make-up and the value of taking a player who's largely viewed as a career back-up. While it's hard to ignore the fact the Steelers lost three and a half games of Ben Roethlisberger last year, and one the year before that (finishing both seasons limping home with an assortment of injuries), stock still isn't being put into the value of a back-up quarterback.

The first fourth round pick, Shamarko Thomas, is generally being seen as favorable. An athletic and powerful safety who fell largely due to his size (5-foot-8 3/4) and lack of playmaking skills in college. He seems to fit in a general mold of experienced players who love the game of football. The Steelers clearly worked this draft for a specific mindset. They wanted high character guys who love football and produced in college.

While readers may give it a B now, they likely gave the 2008 draft a B as well. Time will determine where these players ultimately end up, but if nothing else, there are more than just a few individuals to be excited about from this draft class.