Syracuse safety Shamarko Thomas is a passionate player who may have to refine his tackling technique and press coverage to avoid penalties in the NFL. But as Steelers coach Mike Tomlin says, it's better to say "woah" than "hurry up."

It's like a navy and orange blur has magnetic attraction to the ball when watching Syracuse's Shamarko Thomas play football.

The Steelers' fourth round pick in the 2013 NFL Draft - the one they acquired through a trade with the Cleveland Browns for a third round pick next year - has the recklessness of a strong safety with the discipline of a free safety. Wherever he lines up - and there are plenty examples showing him around the line of scrimmage as well as in deep coverage - he finds his way to the ball.

In Syracyse's 14-13 win over Pitt this past season, Thomas was brought in to cover slot receivers and tight ends alike, and showed at times a strong ability to get a ball carrier to the ground. He plays low to the ground when coming up on a runner and in the open field. Pursuing them at an angle, he tends to stay a bit high, and Panthers tight end Mike Shanahan taught him why that's not a good idea.

Shanahan, a 6-foot-5, 225 pound mammoth, got a little bit lower than Thomas expected, causing Thomas to bounce head first off his shoulder. It appeared Thomas was knocked unconscious for a brief moment. It happened later in the game, and Thomas wouldn't return.

It's all in the name of football, though. He would lay similar hits on the Orange's next opponent, Rutgers, showing a level of toughness that is reminiscent of the Steelers' legacy.

Earlier in 2012, in Syracuse's second game of the year at USC, Thomas had one of this best highlights. In a fourth and short situation, Thomas flashed from a deep safety spot into the A gap right along with a defensive lineman to stop the Trojans' running back for a loss. He attacked the gap like a fullback, showing outstanding recognition skills and fearlessness.

He gets a tad high again against a Trojans tight end on an incomplete pass, but this time, gets him under his arm, knocking him to the ground. It'd be a borderline flag in the NFL, and while obviously he has to watch that kind of play at the next level, as Mike Tomlin says, he's rather say "Woah" than "Hurry up." 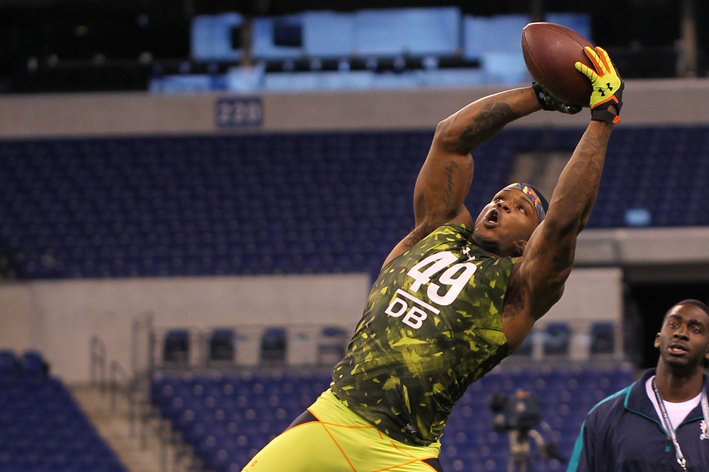 The Steelers made a rare move to trade up to get Syracuse safety Shamarko Thomas, writes BTSC's Neal Coolong

Thomas is a "Woah" kind of player. He plays passionately, but he's in control of himself too. He was matched up with USC receiver (and second round pick of the Buffalo Bills) Robert Woods outside the numbers, and Thomas did an excellent job of riding Woods toward the sideline while still locating the ball. It went to the front pylon, where Woods, who had been driven out of bounds, was nowhere close to making the play.

The knock on him will come in his ability to cover, but he does an adequate job in short zone due to his strength and wingspan. He isn't afraid to jam receivers at the line and ride them off their route. He should probably expect a more watchful officiating eye in the NFL as far as contact with receivers goes, but what he may give up in height he can make up in route disruption.

It's likely he'll get work at both safety positions, with his strength being at or around the line of scrimmage. He can attack downhill, much like starting free safety Ryan Clark does against the run, but in a Cover 2 look - which Syracuse played often enough, he will struggle against over the top throws outside the numbers.

He may not make a play on the ball, but rest assured, he's going to make the receiver earn the big catch.