The second pick is in, with BTSC user Steel in FL playing the part of the second most important Khan in the league (though Shahid does have an incredible mustache).

With just a quick look at the Jaguars roster, it is not hard to see why they have the 2nd overall pick. They have a lot of holes and a lot of questions that need to be answered.

They have a lot of holes and a lot of questions that need to be answered. -Steel in FL

By my count, they need a QB, OG, RT, DE, DT, CB, LB and S. Blaine Gabbert is obviously not the answer, but is Geno Smith worth the 2nd overall pick? Earlier this year I would have said yes but now, no, I don't think he is. What about an offensive tackle? All three top prospects are still there and you could then move Eugene Monroe over to RT, and solidify both spots. But I'm not going there as Monroe is a good young tackle, and is one of their few bright stars. Definitely not going to go with Chance Warmack or Jonathan Cooper, no one is worth the pick at receiver, and safety and linebacker could be address later.

So that leaves me with DE, DT, or CB. There is Sharrif Floyd, and Sheldon Richardson at DT and just Dee Milliner at CB, while DE is where choice meat is. All are still on the board, from Ezekiel Ansah and Bjoern Werner to Barkevious Mingo, Dion Jordan, and Datone Jones.

So which is it to be?

Well, Milliner is not that good to be No. 2 overall, so there goes that. And as good as the DTs are, you could still get one later in the draft like one of the Williams or Kawann Short, and not miss out on much. But the drop from those five guys at DE to the next tier is huge. So I'm going with DE. 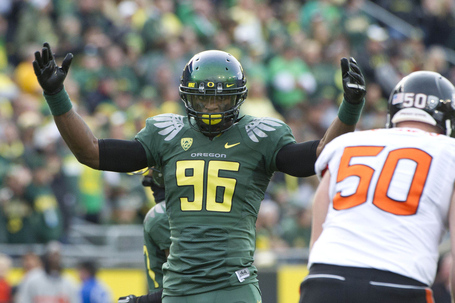 In my perusing of the Jags SB Nation site, Big Cat Country, there is a consensus being formed that Jordan is the best pick to be their LEO in an imitation of the defense that Seattle runs, and a rush OLB in their 3-4. The only player they have right now who could play the LEO is Jason Babin. Jordan could allow the Jaguars to leave Babin on the sidelines during the early downs and when it becomes obvious that the opponent is going to pass, they could then sub Babin in at DE and move Jordan to OLB and turn him into a "joker": he could match in coverage, rush from the outside linebacker position or improvise.

While someone like Ansah or Mingo could be the pick, they don't bring the package of pass rush and versatility that Dion Jordan does.