As the proud and storied franchise attempted to pick itself up off the mat after falling flat in 2012, released television ratings from the draft illustrate an entire city which was perched on the edge of their seats in anticipation.

Share All sharing options for: Steelers and city of Pittsburgh turn in seventh best TV market during NFL Draft

In case you didn't know already; the people of Pittsburgh love anything pertaining to Steelers football.

For once, however, the fact a large number of area televisions were tuned in to watch the Steelers in action is sort of newsworthy, as the team worked its way through the 2013 NFL Draft.

Perusing Mr. Kaboly's list, a definite trend becomes apparent. On draft day, the more desperate the team, the more interested the desperate fan becomes; but do Steelers fans belong in such a demographic? Or, in seventh place on any list?

It's easy to make such a comparison to the hometown markets of the Kansas City Chiefs, Buffalo Bills and Jacksonville Jaguars. Even Dayton could be lumped in for the Cleveland Browns, but its Cincinnati Bengals fans were also watching to see if their team would be continuing their progressive upswing through the AFC North - giving the Dayton area an unfair advantage in these rankings.

The city of Birmingham comes in second, without having any in-state team of their own; therefore their figure is comprised of fans from all 32 NFL teams making their status also invalid. Granted, these are local TV ratings and not a poll of football fans worldwide by team representation; but still.

The two remaining cities on the list do not fit the desperate template, or at least, not in the same sense.

The New Orleans Saints have been a NFC powerhouse in recent times, in total contradiction to their 'Aints days gone by. Now, when the team is no longer drafting at the top every year, area fans actually care who dat. Similarly, Steelers fans find themselves in the same boat, although Steelers fans have always cared about who their team drafted.

In a rare instance, Pittsburgh would not be picking from the bottom of the pile, after a painful 2012 season and even more excruciating beginning to the off-season. Steelers fans knew this year's draft would be pivotal to the perpetuation of their championship contender status. Saints fans were more worried about whether the team would try to draft Reggie Bush or Ricky Williams again. 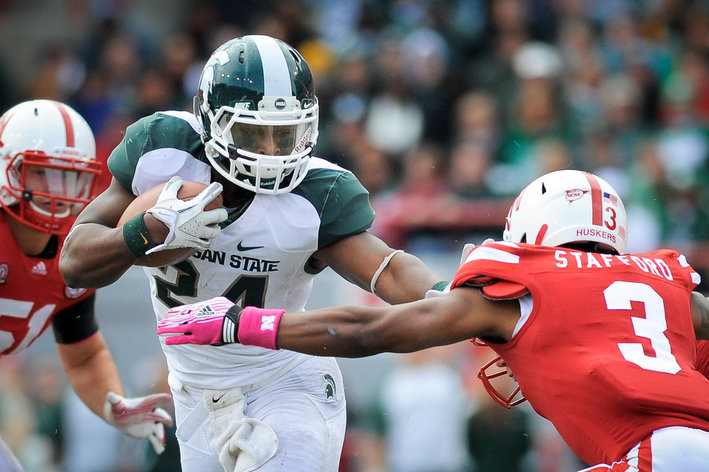 Looking back on Le'Veon Bell's 2012 season, this vicious hit on a Nebraska defensive back stands out as one of his strongest plays.

At the end of the day, the numbers do not lie. The fans in New Orleans were rewarded for their collective effort with a capable young safety named Kenny Vaccaro, adding another fine piece to their secondary to play along with former-Pittsburgh cornerback Keenan Lewis. Evidently, the Arizona Cardinals aren't the only ones out to steal from the Steelers; with New Orleans nabbing not only Lewis, but this list's bragging rights as well.

A formal protest could be lobbied toward whoever approved this statistical comparison, as it leaves no allowance for a very well-known fact. Steelers fans make up at least 25% of every geographical market, therefore debunking any substantiation of this claim. Also, a case could be made for the Steelers having the stronger overall draft class based on team needs and character, henceforth increasing the quality of their town's viewing experience exponentially, which should count for something. However in Pittsburgh, we claim our trophies on the field of battle, not in an arbitrator's chambers.

I propose Steeler Nation plans a "family reunion" for draft weekend 2014 in Pittsburgh. It's time for us as a fan-base to carry our team back to the top once again. We have a standard to uphold.

Next year, may our televisions unleash hell on the NFL Draft.