The third pick is in, and big thanks go to BTSC user twault for being willing and able to jump in and put this together on pretty short notice.

The Oakland Raiders have big needs on both sides of the ball. Specifically on defense, the Raiders don't have much of a pass rush. The linebacker unit also could use an upgrade after striking out on Rolando McClain (who didn't turn out to be the player they hoped for after drafting him 8th overall), and a failed experiment with another disappointing former first rounder, Aaron Curry. The bright spot of the secondary has been the play of safety Tyvon Branch, while fellow safety Michael Huff left for the Ravens in free agency. However, they got a bit of a stopgap by adding veteran corner Tracy Porter.

The "Black Hole" is a fitting nickname for this team, as there are many holes to fill on the roster. -twault

On offense, the line has been fairly decent. The tackles are good, but there could be improvement on the interior. The running backs are talented. The Raiders have had above average QB play from Carson Palmer, but decided it was time to move on, acquire Matt Flynn, and see what he can do. With a small body of work to review, it could be safe to say that there may still be questions at the quarterback position in 2014. The team lacks a true #1 receiver (arguably even before Darrius Heyward-Bey left in free agency) and could use a tight end (Brandon Myers left as well).

The "Black Hole" is a fitting nickname for this team, as there are many holes to fill on the roster. And coming into this draft, the Raiders are already lacking a few picks as a continuing result of the trades to get Carson Palmer and Aaron Curry. There's been a real urgency to get some impact players immediately, but if the Raiders can find a trade partner, they would be a good candidate to move down and acquire more picks.

However, I do expect the Raiders to stay pat and pick the player that will make the biggest impact immediately. While there are a few quality offensive linemen that will be higher on many other teams' draft boards and needs... 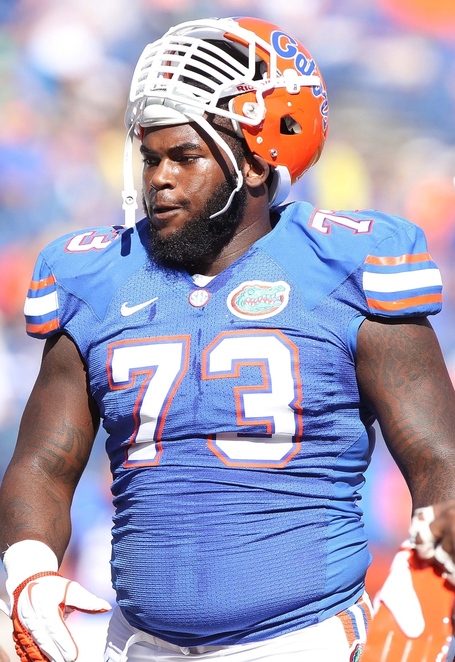 There is no big need for an offensive tackle, there is no sure-fire quarterback or wide receiver, and taking a linebacker, tight end, or corner this early would be a reach. Floyd is quick off the line and powerful. He is strong enough to take on multiple blockers and quick enough to get to the passer. He will be able to generate a pass rush and provide a threat against opposing quarterbacks. With two top defensive players gone, the Raiders must take Floyd to avoid missing the best defensive lineman left.