Our community mock draft keeps rolling, with BTSC user diehardsteelerfan625 picking for that lesser team from across the state.

The Philadelphia Eagles are in a bit of a transition period right now. After swapping Andy Reid for Chip Kelly, they are not only switching offensive philosophies, but defensive philosophies as well in moving from their traditional 4-3 defense to a 3-4 defense. They have covered a good amount of needs in free agency that they would have had otherwise, with Isaac Sopoaga in at NT and Connor Barwin at OLB. They also beefed up their secondary with the additions of Patrick Chung and Kenny Phillips at S as well as Cary Williams and Bradley Fletcher at CB. As far as their offense goes, they already have the personnel needed for Chip Kelly's up-tempo spread that he ran at Oregon, so the transition there could be smoother. Lets break down the needs they have left on the team.

They have been stocking up on QBs with the additions of Dennis Dixon, Trent Edwards, and G.J. Kinne, but at least 2 out of those 3 QBs will not be on the opening day roster. Then there is Michael Vick and Nick Foles. Vick has been up and down as the starter for the Eagles, but he has some left and may see some revitalized play in Kelly's offense. Nick Foles meanwhile has been the subject of many trade rumors over the past few weeks and could be traded before or during the draft. That leaves a bit of uncertainty for the future of that position. Drafting someone like Geno Smith at #4 is entirely plausible for the Eagles, especially given the high amount of public interest the team has had in him.

The Eagles' offensive line in 2012 was dismal, but that was due to the amount of injuries they had to their starters rather than the quality of play. Starting LT Jason Peters missed 16 games, C Jason Kelce missed 14 games, RG Danny Watkins missed 5 games, and RT Todd Herremans missed 8 games. It is hard to protect a QB like Michael Vick with almost your entire starting OL missing that many games. That being said, some of these guys have become injury risks. Peters has only played a full 16 game season once in his 9-year career and Herremans has missed at least 5 games in a season 3 times in his 8-year career. OT is a future need for this team, but it isn't an immediate need, even if it would move Herremans to his more natural OG position. Luke Joeckel, Eric Fisher or Lane Johnson would be a luxury at this point in my honest opinion.

As I said above, the Eagles have covered their NT need with the signing of Isaac Sopoanga. Fletcher Cox also has the ability to play DE in a 3-4 system. The issue here is the other DE spot. I don't believe that Trent Cole is going to be with the Eagles for much longer because he doesn't fit anywhere in a 3-4 defense. He doesn't play coverage, so that rules him out as a linebacker, while at the same time, he is a finesse pass rusher, so I don't believe he is a fit as a 3-4 DE. Star Lotulelei would be a theoretical choice to fill that spot here if he were available.

Cornerback is an area where the Eagles have seen the most change. Nnamdi Asomugha was released and eventually signed by the 49ers, while Dominique Rodgers-Cromartie was picked up by the Denver Broncos as an unrestricted free agent after his contract ran out. The Eagles then picked up Cary Williams from the Ravens, who had a noteworthy campaign in 2012 after Lardarius Webb went down, which led to an eventual Super Bowl championship. They also acquired Bradley Fletcher, who has only started 8 games over the past 2 seasons with the St. Louis Rams. Williams is able to be a starter in the NFL, but I am not so sure about Fletcher, or anyone else on the Eagles for that matter.

With the 4th pick in the 2013 NFL Draft, the Philadelphia Eagles select Dee Milliner, CB, Alabama. 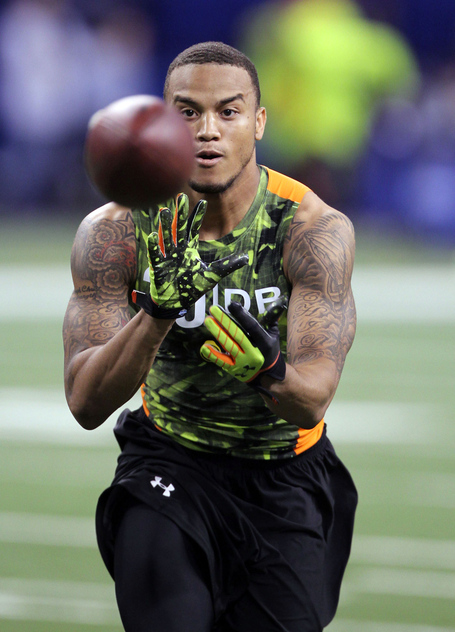