We've had four straight defensive picks to start this mock draft, will BTSC user asmith87 make it five? The Lions have a win-win-win scenario here for their top needs.

The Detroit Lions have a variety of options for who to pick with the way this draft has gone so far. With Detroit losing both offensive tackles - Jeff Backus to retirement and Gosder Cherilus to free agency - there is a very clear need. Also, with the loss of Cliff Avril to free agency, a pass rusher could be needed as well. But with Dee Milliner off the board, there is no secondary player that is worth a top-five selection.

The Lions have a win-win-win scenario here with probably their three favorite prospects still on the board - the top two offensive tackles, plus one of the top pass rushers as well. So let's go through which need is more important: QB protection or pass rush.

Detroit lost both of their starting offensive tackles, like I mentioned earlier, but they did draft Riley Reiff last year to take the reins from Jeff Backus when he eventually retired. I believe Reiff may be a better fit as a RT, but at any rate he now fills one of the vacant tackle positions. The Lions have the choice between Eric Fisher and Luke Joeckel to fill the LT need. These two players fit the prototype for LT in the league - a great pass protector and a natural when it comes to blocking.

Reggie Bush did say the Detroit Lions will be the new "Greatest Show on Turf." I can see his reasoning: a big arm QB - check; a great WR - check; a speedy pass-catching RB - check. I believe it will be kind of hard to be the high flying offense they want to be with Matt Stafford on his back, running for his life, or worse, in street clothes on the sideline. Detroit really cannot go wrong with either tackle as both will protect Stafford and keep his jersey clean.

On to the pass rush, Ezekiel Ansah is a freak and has been compared to Jason Pierre-Paul, which he should. There are several similarities between the two. For example, both were very raw when they came out of college and have very high ceilings. Ansah has all of the traits that a defensive coach desires in a pass rusher, but will take a lot of work to refine and perfect his craft. He could be the next JPP, but in my honest opinion, Detroit wants to sell tickets and will focus on putting up points and being the "Greatest Show on Turf," as Detroit is set up as a win-in-a-shootout kind of team. I am sorry Ezekiel, but you are not the Ansah.

His position flexibility will allow him to get on the field from day one and start at either tackle spot on the offensive line, or guard in a bind-asmith87

I do have a little preference for Fisher, being a fellow Chippewa myself. He was easily the most consistent player on the field when I saw him during these past three seasons. He easily shut down the opposing rush of the MAC Conference. He started all across the line playing at RG, RT, and finally LT - where he truly excelled. Fisher is often described as a hard worker and a natural athlete, and his great offseason and draft preparation has shown that during the Senior Bowl and NFL Combine. I believe he would be a great addition to the Lions and will protect Matt Stafford's blindside for the next 10 years.

But the main reason why Fisher will be drafted over Joeckel will be something all Steelers fans have grown to love in offensive linemen - position flexibility. His position flexibility will allow him to get on the field from day one and start at either tackle spot on the offensive line, or guard in a bind. He can greatly improve their offense so the Lions may not have to see another 4-12 season for quite some time.

So with the 5th pick in the NFL Draft, the Detroit Lions select Eric Fisher, OT, Central Michigan University. 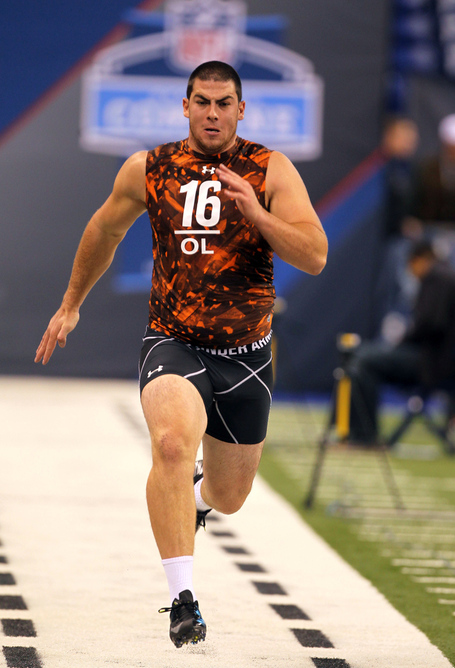