With 48 players signed out of the 51 that will count against the 2013 salary cap, the Steelers find themselves with only $2.07 million of space under the cap. Willie Colon's contract clears post-June 1, providing enough space to sign the 2013 draft class.

Share All sharing options for: Steelers Free Agency: The bigger picture is alarming

The salary cap picture becomes clearer as the Steelers struggle to improve on a team that finished 8-8 last season. But much consternation has been felt in Steeler Nation over the past several weeks as the team teases its fans with its flirtations with Jake Long, Elvis Dumervil, Victor Butler, Dan Connor, Beanie Wells, Ahmad Bradshaw and others, yet cuts James Harrison and Willie Colon to create cap space, all the while watching Keenan Lewis and Mike Wallace and Will Allen leave via free agency, and awaiting a decision by Emmanual Sanders and the New England Patriots. 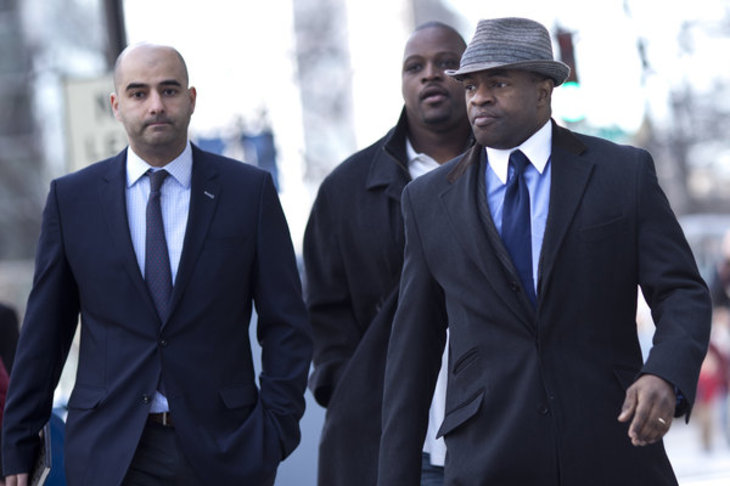 In the meantime, the Steelers extend Larry Foote for another three years and bring back into the fold players they let go in years past; William Gay returns from the Steelers' resort compound in Arizona, and Matt Spaeth manages to hold onto the life-line the Steelers threw him. They even re-signed a player unwanted by the rest of the league in Stevenson Sylvester who was initially not even given a tender offer by the team.

Should the pedestrian re-signing of former players be a surprise? The Steelers have long operated on the presumption that "the Steelers Way" is different than that of the rest of the league, but given the circumstances the team now finds itself in, presumably this now means that all else being (loosely) equal, an aging or underperforming former Steeler is better than a younger player who has not been marinated in the Steelers Way and its complex offensive or defensive schemes.

The Steelers are unable to sign either their own or other free agents to improve a team that finished 8-8 last year due in large part to the decision to run the table with the players that got them to the Super Bowl in 2005.

The Steelers rank 23rd in terms of retention rate of their draft picks since 2008.

Make no mistake about it, it was a well considered decision with the securing of a league leading sixth Lombardi in 2008, and a chance for the seventh in 2010. However, decisions such as this are not made in a vacuum, nor are they made without a price to be paid later on, especially if a presumed strength becomes a liability, taxing the very basis upon which the primary decision was based.

Just as certain as the universe requires a reaction to every action, and the IRS wants to hear from you by April 15, there are consequences for the decisions one makes. While the Steelers chose to "dance with the ones that brought them" by doing the contract restructuring dance, if you choose to dance with the devil, you risk getting burnt.

The current CBA was signed in 2011, and with it came information from the league office to at least 31 teams concerning the impact on the salary cap this new agreement would engender. Subsequent information made public in the spring of 2011 made it clear that there was little cap growth expected for that year, and for 2012, 2013 and 2014.

The 2014 television contract was signed in December 2011. It would stretch the bounds of credibleness to believe the Steelers and the rest of the league didn't have a firm understanding of approximately how the new contract would impact the salary cap starting in 2014 well before it was announced. Yet in both 2011 and 2012, the Steelers chose to restructure numerous contracts of key players in order to get under the salary cap imposed by the NFL during those seasons; specifically Ben Roethlisberger (3 times), LaMarr Woodley and Lawrence Timmons (both twice), and Ike Taylor (once).

Each of those restructures are now having a cumulative deleterious effect on the Steelers' ability to upgrade its team in light of last year's record, fading veterans, lackluster backups, and the recent success of the Baltimore Ravens and the continuing improvement of the Cincinnati Bengals and seemingly even the Cleveland Browns.

As of 2013, Colbert's decisions have resulted in the Steelers carrying on their books $12.7 million in restructured money from just those players named above. That equates to 10.4 percent of the 2013 salary cap being used to pay for getting under the cap in 2011 and 2012.

Granted, Roethlisberger, Woodley and Timmons are cornerstones of the team, but Colbert used those players' contracts to mortgage the Steelers' future (2013 and beyond) in order to afford to play by the League rules in 2011 and 2012, and they had to do that in part because of their inability to successfully draft players who could have replaced other older, expensive yet less effective veterans on the team.

Aging players who are being paid large sums of money now for the successes of the past are carrying this team. Yes, the glory of 2008 and the sixth Lombardi still gives Steeler Nation bragging rights in 2013; yes the Steelers were but a fumble and an interception away from number seven in 2010, which gives comfort to those who think that Kevin Colbert can do no wrong. But the failures of the draft in 2008 and 2009 leave the Steelers with but two players from those drafts still on the payroll, which means little or no roster depth for the Steelers to rotate with many of those same aging veterans. The 2012 draftees David DeCastro, Mike Adams and Kelvin Beachum now are required to carry the weight of their entire draft class as injuries, legal issues or failure to perform engulfed the other four picks, with Alameda Ta'amu's fate now resting in Goodell's hands.

But the impact of the Steelers' choice to dance with their existing stars and Colbert's inability to draft quality replacements doesn't end in 2013. Players such as Steve McLendon, Ziggy Hood, Jerricho Cotchery, Jason Worilds, Heath Miller, Maurkice Pouncey, Cameron Heyward, Marcus Gilbert, Cortez Allen, Curtis Brown and others have contracts coming up in 2014 and 2015, but as things currently stand right now, the Steelers will spend $11.7 million in 2014, and another $11.7 million in 2015, paying for that 8-8 season which, by the way, carried a $7.2 million contract restructuring price that paid for the ignominiously Tebow-ed 2011 season.

In other words, the price Colbert is paying for his failed draft picks and getting under the salary cap in 2011 and 2012 is the equivalent of the Steelers signing at least one of their own free agents (Wallace or Lewis), or a quality, young and capable free agent from another team who might be that missing piece they need to remain not just competitive, but be an actual well rounded force to be reckoned with in the 2013 season and beyond.

As was mentioned earlier, the Steelers have never been known for FA signings, and history and the Washington Redskins proves that decision to be wise. But the Steelers used to be known for their drafting excellence, and as a result used to have the ability to let go of a starting veteran who either commanded too high of a price to re-sign, or may be on the downward side of his career, and replace him with a skilled yet affordable second or third year player waiting in the wings. The fates of Colbert's picks these past few seasons however indicates he's lost his touch in making draft picks, and he's already mortgaged the house on the roster of players that brought the Steelers so much success these past seven years.

With so little change or upgrade to the roster that produced an 8-8 season last year, what is the basis for believing in the Steelers returning to Super Bowl caliber play in 2014? Kevin Colbert himself said it would be hard to expect different results with the same roster of players.

The cumulative effect of Colbert's choices, both fiscal and draft-wise is being felt more than ever now. With the Steelers having chosen not to pay the Piper in the past, the Steelers better hope he can regain his magic touch and strike gold in the upcoming draft, or Colbert, the Steelers, and Steeler Nation may find that the price of dancing with the devil can be rather steep.

"…you have a self destructive destiny when your inflicted

there's no diversity because we're burning in the melting pot

so when the devil wants to dance with you, you better say never

because the dance with the devil might last you forever."