"Steelers West" almost saw Luke Joeckel and Eric Fisher fall into their laps, but it was just a tease. Who will BTSC user Steel34D go with instead as our community mock draft moves forward?

The 2013 Arizona Cardinals are once again a team in transition. They fired their General Manager Rod Graves and their best coach in franchise history (by win percentage) Ken Whisenhunt. Steve Keim, who was an integral part of the scouting department, is the Cardinals new GM.

Keim went with a common theme for Arizona since 2007 and hired another former Steelers' offensive coordinator in Bruce Arians as their head coach. Whisenhunt's confidence that D'Anthony Batiste could start at LT for them in 2012 was unfathomable because the year prior he wasn't even good enough to justify receiving a jersey on game day for more than half the season. This, along with subpar QB play, ultimately led to his firing.

On paper the 2013 Cardinals offense looks improved, but they have yet to address the root of the problem.-Steel34D

Arians knows how bad this O-line and offense as a whole was and has hired multiple offensive line coaches, as well as renowned offensive mind Tom Moore, onto his 2013 staff. After trading for Carson Palmer, Arians has a QB who can throw the deep ball. Signing Rashard Mendenhall gives them a solid RB to pair with the talented but often injured Ryan Williams - who has ended up on injured reserve both years he's been in the league so far. On paper the 2013 Cardinals offense looks improved, but they have yet to address the root of the problem.

The Cardinals desperately need to improve their O-line play. They could also use a pass rushing OLB to pair with the solid play of 2011 4th round pick Sam Acho, and need safety help after releasing both of their starting safeties from 2012. But clearly, there is only one way the Cardinals should go with this pick based on talent and need. 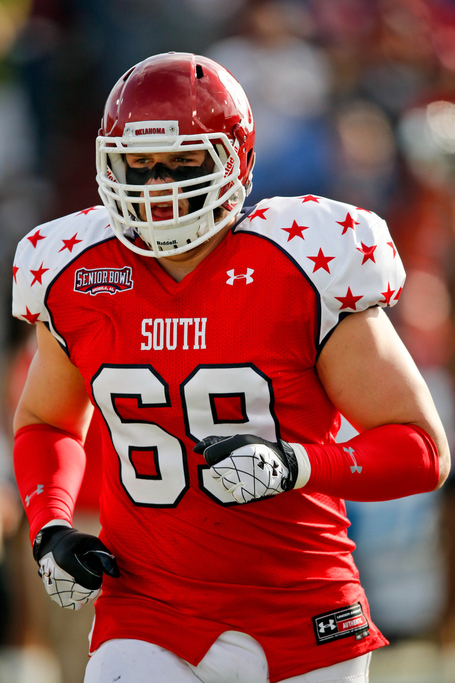 Lane Johnson was a former high school quarterback who originally went to Kilgore College, a small junior college in Texas, to play QB. After spending a year at Kilgore, he transferred to Oklahoma University in 2009 as a tight end and defensive end. In 2011, Johnson was moved to the offensive line to play right tackle and started all but one game at the position. He had started to garner some draft buzz as a possible mid-round talent who was extremely raw.

In 2012, the now 6-foot-6, 300 pound tackle with 35 ¼ inch arms was moved to the left tackle position. As the season went on, the raw LT from Oklahoma started to impress with how much he had improved during the season - culminating in a match-up against Texas A&M's DaMontre Moore, where Johnson shut him down. At the Senior Bowl, Johnson continued to show he had the superior athleticism to play LT. After two top junior OTs decided to return to college, Johnson's stock rose even higher from a late first rounder to potential top-10 pick.

In my opinion, [Johnson] has the highest ceiling of any of the potential 1st round offensive tackles-Steel34D

Lane Johnson is still raw. He needs to work on his footwork, he tends to extend his upper-body towards the defender instead of keeping his feet under him, and he needs to practice keeping his center of gravity low so that he can re-anchor through contact. He has the ability to shut down the speed rush, but will set too far inside at times, which allows him to get beat. With only two years of experience, the fact that he has already developed into a top ten pick is amazing. However, Johnson can still get better and in my opinion, he has the highest ceiling of any of the potential 1st round OTs.

Where does he fit?

By drafting Johnson, the Cardinals answer their questions at LT. At RT they got a steal in Bobby Massie (who I was high on as a RT last year), with their 4th round selection in last year's draft. Massie started out the year a bit rough going up against some of the league's best pass rushers, but finished the last six games passing the eye-test, as well as grading out positively by Pro Football Focus in all of them -- which included not allowing a pressure to the Rams' Chris Long, who had scorched him the first time around.

The Cardinals' interior line play was atrocious. Lyle Sendlein is at best an average center and LG Daryn Colledge isn't any better. However, none of them were worse than RG Adam Snyder. Snyder, while serviceable in the running game, was about as effective as a traffic cone in pass protection. The drafting of Johnson would allow them to move Levi Brown, former No. 7 pick overall in 2007, inside where his aggressiveness and physical play would allow him to excel against the bigger but slower interior defensive linemen, à la Willie Colon for the Steelers in 2012.

Essentially, the drafting of Lane Johnson allows the Cardinals to fix two holes in their offensive line, which should help their running game. Palmer, who is best at play-action and deep throws, should get enough time to play well with an improved running game. This will allow them to improve an offense which was ranked 32nd in the NFL last year.