The run on offensive tackles is over. Will that be succeeded by a run on the guys they match up against? BTSC user dnclark has the next pick in our community mock draft.

Syracuse University West (err, I mean the Buffalo Bills) are on the clock with the eighth pick.

The Bills are in an interesting spot here. They desperately need a quarterback. Free agent signing Kevin Kolb is a stop-gap solution at best, but this draft lacks the elite talent at QB. Linebacker is another area where the Bills are (at best) bad. This meshes into their pass rush limitations, but fortunately, this draft class is loaded with pass rushing talent from the outside. Finally, their QB needs someone to throw to, and aside from Stevie Johnson, the Bills receiving corps leaves something to be desired.

Aside from Kelvin Sheppard, the Bills linebacking corps is largely inexperienced and rather uninspiring. Manny Lawson is the most experienced of the group, but as a pass rusher he has only totaled 18 sacks across seven NFL seasons, a third of which came in 2009. The Bills seriously lack someone consistently doing anything across from DE Mario Williams, who recorded 10.5 of their 36 sacks last year. Luckily, there is plenty of talent still on the board.

Although the best pure athlete - Oregon's Dion Jordan - has already been taken, there are four options at LB who would be an immediate upgrade for Buffalo's unit: LSU's Barkevious Mingo, Georgia's Jarvis Jones and Alec Ogletree, and Kansas State's Arthur Brown. Depending on whose board you look at - Jones, Ogletree and Brown seem to shuffle around in the rankings, but Mingo is solidly ahead of them. With good reason.

The 6'4", 240 lb pass rusher is a monster off the edge, with elite speed. He ran a 4.58 in the 40 at the Combine. To give you a point of reference, that's just .01 seconds off of Clemson's DeAndre Hopkins - one of the top receiver prospects, who is nearly 30 lbs lighter.

With six members of the coaching staff from Syracuse - including head coach Doug Marrone and offensive coordinator Nathaniel Hackett - it's an open secret that the Bills are very interested in Ryan Nassib. He is a good QB with a strong arm, is pretty accurate and has great intangibles. Nassib has three years starting experience in Marrone's system, and set a number of school records his senior season.

But he is not worth the 8th pick overall.

Despite the clear need at QB, no one in this class stands out enough to go 8th overall.-dnclark

Geno Smith is still on the board, but his style of play and the type of offense Marrone and Hackett will run do not mesh that well. USC's Matt Barkley and NC State's Mike Glennon are also options and are better stylistic fits, but again, neither is a terribly inspiring 8th pick overall.

At least one out of Nassib, Glennon, Tyler Wilson, and Landry Jones should be available when the Bills pick early in the 2nd round.

There is more talent among the top receivers than the top quarterbacks, with Cordarrelle Patterson, Keenan Allen, DeAndre Hopkins and Tavon Austin all possible Day 1 picks.

There is also more depth. A quality #2 receiver to line up opposite Stevie Johnson can be found in the 2nd or 3rd round without too much trouble - like Robert Woods, Quinton Patton, Markus Wheaton, Stedman Bailey, Da'Rick Rogers or Ryan Swope.

The Bills also have T.J. Graham on the roster, last year's 3rd round pick. Graham may not have had an inspiring first year, but he also had Ryan Fitzpatrick for a QB, so take that with a grain of salt.

With no receivers taken yet, the Bills have the pick of the litter. But given the depth of this draft class, there is talent to be found later and more immediate needs to meet. 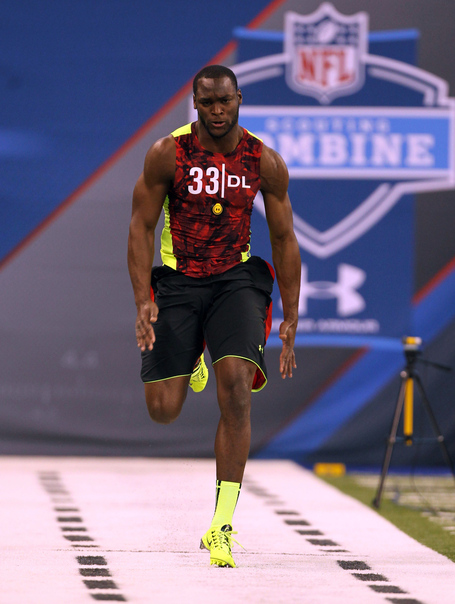 Despite the clear need at QB, no one in this class stands out enough to go 8th overall. And with Dion Jordan already being taken with the 2nd pick by Jacksonville, it appears there will be an early premium on outside pass rushers that cannot wait until the 2nd round to be addressed.

Mingo is an immediate upgrade - he should be a starter opening day. The idea of Mario Williams on one side, and Mingo on the other is daunting for opposing offenses. Then add in DT Marcell Dareus and ILB Kelvin Sheppard in the middle, and the Bills front seven looks much improved already. With QBs like Brees, Roethlisberger, Brady, Ryan and Flacco all on this upcoming season's schedule, an effective pass rush is a must.