The Jets are up now in our community mock draft, but in an interesting twist, BTSC user PCISteeler decided that it would be more informative to examine the recent draft history of a different NFL team and have that as guidance for this pick.

Here goes. I have a perfect 1-0 record in the BTSC mock draft (picked Cam Newton to Carolina a couple years back), so I better get this right.

This was a pretty easy pick for me. Living in New Jersey and working with several Jets fans, they seem to want a playmaker: "We need a RB, We need a WR, We need a QB!"

I just nod my head and ignore them. They are wrong. Go back to eating your corned beef hash.

their best move was in the signing of new GM John Idzik from the Seahawks' front office.-PCISteeler

This offseason has been quiet, in Jets terms. They signed a QB that hasn't played in two years. They are dangling their best player to be traded. They signed Willie Colon to strengthen their OL unit. But their best move was in the signing of new GM John Idzik from the Seahawks' front office.

Instead of looking at the Jets' recent draft trends, I paid attention to the Seahawks' recent draft trends - especially with Idzik around. Jets fans need to trust this guy. His first round picks included OT Russell Okung and OT James Carpenter. He drafts lineman high and skill players later.

With the 9th pick in the NFL Draft, the New York Jets select Chance Warmack, OG, University of Alabama. 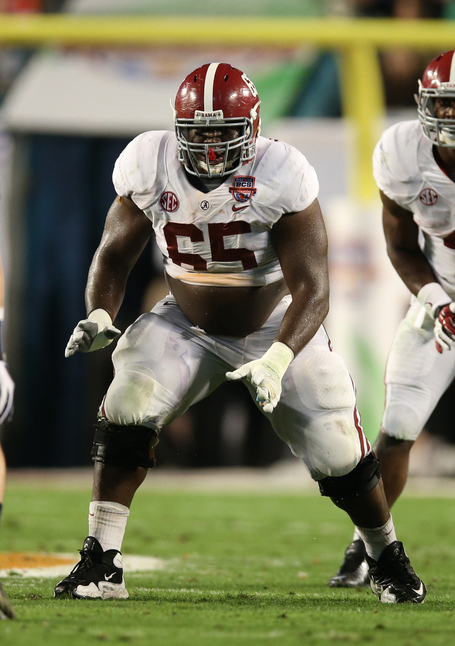 This might be too high for the elite guard prospect. I was thinking of selecting Tavon Austin, but it would be a super reach, even though he is shooting up the draft boards and is a playmaker they desperately need. I wanted to go pass rusher like Ezekiel Ansah, which is a possibility with Rex coaching him up, but Rex is on a tight leash this year and it might be his last year in NY.

The Jets are in rebuilding mode, and with a chance to get an elite prospect on the offensive line, you have to draft him. Dude is a beast, a road grader, an All-American at Alabama and very athletic lineman. The Jets should stop with their sideshows and draft this guy. Even their fans are getting tired of it.