We've already had four offensive lineman selected in the top-10 of our community mock draft, anyone know what the actual NFL draft record is? Regardless, BTSC user gentile3 has the pick here for Tennessee.

The Tennessee Titans have a lot of holes to fill.... TE, DE, DT, OLB and OL. As soon as Chance Warmack came off the board at pick 9, I curse the Jets... but then I start trying to trade out of the #10 spot hoping someone in love with Geno Smith answers my call.

Since this exercise doesn't allow for that, I push on knowing TE is my biggest weakness after losing Jared Cook in free agency. Fisher knows what a talent he is and stole him out from under us. I like the Tyler Eifert kid from Notre Dame, but not enough to pick him here.

I need help on the defensive line as Derrick Morgan has not exactly lived up to his 1st round billing. I looked at Margus Hunt, but he's too raw right now for a top-10 spot, same with Bjoern Werner from FSU... both guys got talent, but I need an immediate contributor on every down.

Thinking of the defense first is a luxury the Titans don't currently have, not when they have a first round QB pick who has a fragile psyche and very little fan support. There is only one true way to help Jake Locker in 2013 -- get CJ2K back on track big time. He's the stud of the offense - making defenses put eight in the box makes Locker's job so much easier. The defensive picks could make the Titans better long term, but the owner, the coach, and the entire city are in a desperate ‘win now' mode.

Back to CJ2K, like I said before he's an absolute stud, but he's not perfect. He's a small guy who doesn't get a lot of yardage after contact... but with just a sliver of space he can open up that 4.4 speed and be gone from anywhere. The Titans need CJ2K back to save Jake Locker from being a bust. CJ2K needs space to operate... we need another road grader.... 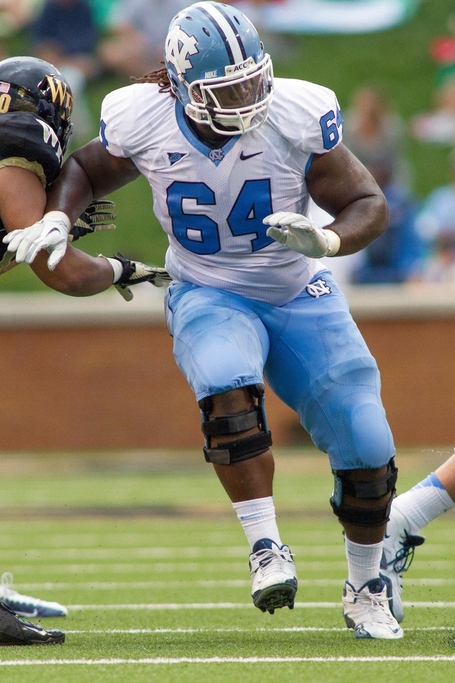 I hope to come back in the 2nd round and take Zach Ertz, TE from Stanford. Then there are no excuses for Locker: he has multiple weapons to utilize and CJ2K to carry the load. We will have to find some defensive gems in the later rounds... but early in this draft is all about getting the offense back on track.