Jamison Hensley asks a question which Ed Bouchette had already answered. While Ed's response may be the best path for now, will it only lead to ruin later?

Share All sharing options for: Steelers are still trying to solve mystery of Ziggy Hood and Cameron Heyward

When the Pittsburgh Steelers are able to find modern legends like Aaron Smith and Brett Keisel in the bottom rounds of the NFL Draft, surely spending a first-round pick or two should produce even greater results.

As it turns out, not so much; or at least, not like some may have hoped. However, just because a player doesn't live up to expectations immediately, does not necessarily mean they will never reach their perceived potential. Some just take time to develop.

Exactly how patient can the Steelers be? 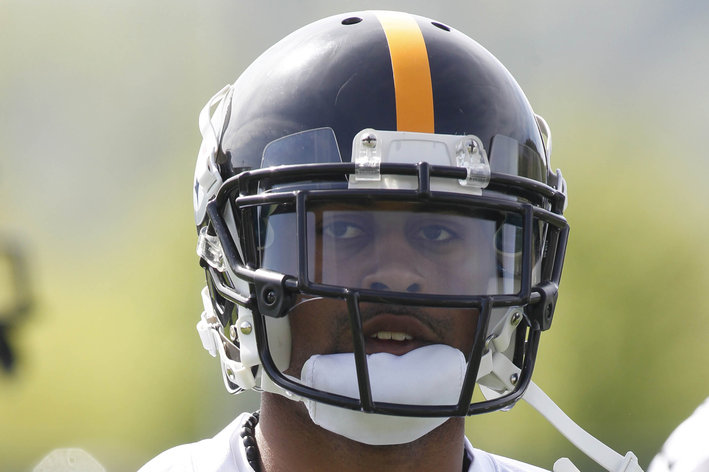 To be fair, Pittsburgh has not needed to worry about their defensive end positions since the year 2000. The Steelers drafted left end Aaron Smith in the fourth-round of the 1999 draft. The following year, Pittsburgh signed free-agent defensive tackle Kimo Von Oelhoffen from the Cincinnati Bengals, who converted to right end when Casey Hampton locked down the nose tackle spot for the next dozen years. Oelhoffen left for the New York Jets in 2006, after his infamous low hit on the Bengals Carson Palmer and Pittsburgh's Super Bowl championship run of 2005. He was replaced immediately by a young Brett Keisel, who became Smith's bookend until Smith was released by the Steelers following the 2011 season.

With such productive stability, the Steelers were able to fill out their depth charts with wise veterans rather than future prospects. Guys like Nick Eason, Travis Kirschke and Chris Hoke were adequate reserves, able to step in quickly when injury stole a starter. Unfortunately for the Steelers, Smith got older; and now, so is Keisel.

It's not as if Pittsburgh was unaware of their aging. In fact, they tried to be proactive about the inevitable. Knowing they would eventually have to replace Hampton, Smith and Keisel, the team used first-round picks on Evander "Ziggy" Hood (2009) and Cameron Heyward (2011). The team hoped Hood would have time to understudy Smith, grooming him for his future role. Unfortunately, Smith's body began to fall apart during Hood's rookie season.

Hood was forced into starting duty during his sophomore season, as Smith ended his second consecutive season with an injury. Hood repeated his role of replacement in 2011, when Smith suffered his final injury with the Steelers. Hood has maintained his spot ever since, although he continues to draw mixed reviews. While he has exhibited quickness, agility and strength in college and youtube videos; he has often looked like someone trying to learn on the job.

Heyward was selected as the best player available according to the Steelers draft board. With Hood already in place, first-round pick Heyward was instantly tabbed as Keisel's eventual replacement. Now in 2013, many are wondering why the young Heyward has not surpassed the aging Keisel on the depth chart.

ESPN's Jamison Hensley quotes in his AFC North blog today, Ed Bouchette's premium column from the Pittsburgh Post-Gazette's website, which revolved around this same topic: "Defensive end Cam Heyward played in a 3-4 defense at Ohio State. Why has he had difficulties getting on the field for the Steelers?"

"My understanding that Cam was used a little differently by the Buckeyes than what the Steelers want from their 3-4 defensive ends. I don't know that he's had such difficulties as much as Brett Keisel has played so well in front of him. Perhaps Heyward will give Ziggy Hood some competition for the job this year."

Bouchette is correct. One of Keisel's greatest attributes is the fact he only gets better with each passing year, as Dick LeBeau's complex schemes become second nature. He may be a step slower, but he remains as fierce of a competitor as he's ever been. He also remains one of the veteran leading voices on the field, and in the locker room. Keisel's presence presents quite a mountain for Heyward to climb to earn a starting spot.

Where Bouchette's reasoning begins to degrade, is in the mention of a possible training camp competition between Heyward and Hood for the starting spot opposite of Keisel. While Bouchette's theory would give each player proper motivation in camp preparation; like any quick remedy, there could be lingering side-effects.

Hood is about to play out the final year of his rookie contract in 2013, and Heyward will do the same in 2014. Each player will be looking to prolong their careers, whether in Pittsburgh or elsewhere. The Steelers need to establish a value for each player before they become free-agents. They do not want to sign a player to an extension who in the long run fails to produce as hoped. They also don't want to let a future hall-of-famer walk out the door because he just needed more time to grow. 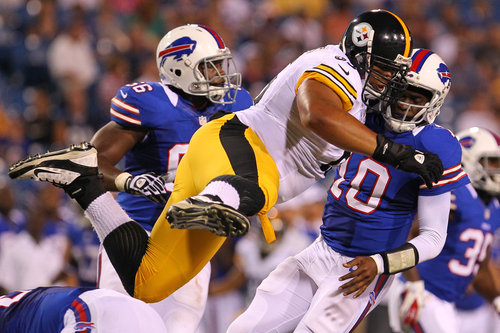 While some worry about Hood vs. Heyward, one name which shouldn't be forgotten is Al Woods.

If Heyward competes with Hood and fails, he will simply fall back in line behind Keisel. However, this would mean at least another year before anyone gets a glimpse of Heyward in a full-time role, making his final contract year an audition. If Heyward is starting at right end next season, it will be because the Steelers did not re-sign Keisel. If Heyward did not appear as a starter during his 2013 competition, the team would be tempted to find another prospect in the draft - leaving Heyward even less margin for error.

If Heyward competes with Hood and wins the left end job, what happens to Hood? Would the Steelers re-sign a left end to play right end, when the same player couldn't keep his original left end job away from the backup right end? Heyward could prove to be a successful left end, which would further support his draft selection not being wasted; but the bust label would only land on Hood instead, leaving the Steelers with the same scar of failure.

While the team cannot be certain Hood is a solution in his own right, at least he has experience at his position and continues to show improvement. If Heyward has shown any difficulties learning the defense, will asking him to learn a new position actually benefit his growth? If the Steelers ask Heyward to compete against Hood, they will essentially end up sacrificing one first-round pick for another; when they could have continued to develop both.

Perhaps instead of asking Heyward and Hood to worry about each other, they should rather be worried about the young men behind them, who are hungry and anxious for an opportunity to seize a roster spot. Hood is looking back at Al Woods and rookie Nicholas Williams. Heyward is still looking up at Keisel, but below him are a couple of undrafted rookies who fit the mold, in Brian Arnfelt and Cordian Hagans.

The Steelers have proved in the past, they can find great defensive linemen anywhere; but first-round picks are not so common. Will the Steelers continue to have faith in their ability to develop talent for the future, or will they be content to cut bait with one pick to justify the other now?