The Steelers drafted quarterback Landry Jones in the fourth round of the just concluded NFL Draft. And almost immediately, speculation began as to whether or not the team was looking to Jones to be Ben Roethlisberger's heir apparent. But it's doubtful Pittsburgh is looking that far down the road with regards to its 31 year old QB. And even more doubtful the team has pegged a fourth round pick as his eventual successor.

Share All sharing options for: Doubtful the Steelers drafted Landry Jones with the intent of replacing Ben Roethlisberger

On the second day of the 2003 NFL Draft (also known as the weekend God gave Steeler Nation Troy Polamalu ), Pittsburgh used its fifth round pick to select quarterback Brian St. Pierre out of Boston College. Almost immediately, people started to speculate on the meaning of the selection.

You see, there are some things in life that are certainties: The Sun will set in the West; a Kardashian will always be on TV; and anytime an NFL team drafts a quarterback (regardless of what round), fans and the media will immediately begin to search for a hidden agenda--it's kind of like how people gossip when someone who is married (or otherwise involved) has lunch with a member of the opposite sex.

To quote Phoebe from Friends: "Oh, there's no such thing as an innocent burger."

McShay says the "Other" Jones is Steelers best pick 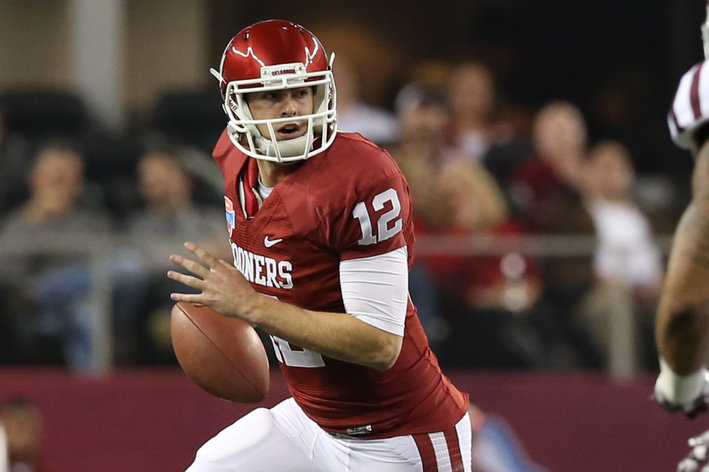 And just like the usual direction of the Sunset that evening, when the Steelers selected quarterback Landry Jones out of Oklahoma in the fourth round last Saturday, ears perked up all over Steeler Nation. After all, Jones was an extremely productive college quarterback for a big-time school, and probably would have been drafted a bit higher if not for some struggles with consistency, according to many draft experts.

Yes, Jones was a productive college quarterback, but so was Dennis Dixon. You remember him? He was one of the most electrifying college quarterbacks in the nation while at Oregon and considered a serious Heisman trophy candidate before suffering an ACL injury late in his senior season. Dixon would most certainly have been drafted much higher, but thanks to his injury, Pittsburgh grabbed him in the fifth round of the 2008 NFL Draft.

While there wasn't the same kind of speculation surrounding Dixon as there is with the pick of Jones (Ben Roethlisberger was only 26 at the time), many were excited about Dixon's selection and wondered how Mike Tomlin's staff was going to utilize his exciting skill-set.

If nothing else, hopefully Dixon would develop into a competent back-up quarterback who could fill-in for Roethlisberger if the need ever arose. And while Dixon did start a few games in place of Roethlisberger thanks to injuries and his suspension in 2010, he never developed into the quarterback many hoped he would, and his career in Pittsburgh was short-lived.

The unremarkable careers of Dixon and St. Pierre, who has only appeared in three NFL games, haven't proven to be good examples for people who want to jump on the Landry bandwagon. If you read some fan comments attached to the end of this Post Gazette piece written by Steelers beat writer Ed Bouchette, you'll see the word "groomed" used more than once. As in, "The Steelers need to start grooming their qb of the future."

Even one of Pittsburgh's favorite sons, Charlie Batch, who has probably seen his final playing days thanks to the drafting of Jones and the March signing of fellow Pittsburgh native, Bruce Gradkowski, even weighed in with the "grooming" speculation during an article in Monday's Pittsburgh Post Gazette:

"Ultimately, I think this isn't about replacing me. Big Picture, maybe they're thinking, 'Can we develop Landry Jones to be the starter? Maybe two years from now, he could be our guy for the next 10 years.' We don't know. But with the contracts for quarterbacks these days, he'd certainly be a heck of a lot cheaper than Ben at age 34, 35 or 36."

In a radio interview on 93.7 The Fan, Tuesday morning, Batch pointed out that Pittsburgh doesn't normally sign players to third contracts. And while that may be the case, other than Terry Bradshaw from 1970-1983, the Steelers don't normally have multiple Super Bowl winning quarterbacks under contract, either.

At 31, Roethlisberger is at an age when a lot of quarterbacks are entering their prime years. And while it is true that quarterback salaries are reaching astronomical proportions, QBs the talent of a Roethlisberger aren't exactly easy to find, nor are they easy to replace.

Is it conceivable that Pittsburgh might want to part-ways with Roethlisberger once his current deal is up after the 2015 season? I suppose. He'll be in his mid-30's by then, and who knows what state the player and the franchise will be in three years from now.

The Colts parted ways with then 35 year old Peyton Manning following their disastrous 2-14 season in 2011. The move was made partly because of concerns over Manning's surgically repaired neck that caused him to miss the entire 2011 season and partly because he would have been owed a $28 million signing bonus had he played in Indianapolis a season ago.

But the Colts didn't have a mid-round quarterback waiting in the wings to take over for Manning. Instead, they selected Stanford's Andrew Luck with the first pick of the 2012 NFL Draft.

This is obviously just a guess on my part, but I believe when the time comes for his departure, the Steelers will try to replace Roethlisberger much the same way.

With so many areas to address, I highly doubt the Steelers were looking for their franchise quarterback's heir apparent this offseason. And with a draft class that only had one quarterback who was deemed worthy of a first round selection (and even that was a surprise to many), I doubt someone who fell to the fourth round is going to be the "future" in Pittsburgh.

Maybe I'm wrong, and maybe Jones will eventually prove to be the Tom Brady to Roethlisberger's Drew Bledsoe (if that were to happen, I would be the first person on the bandwagon), but the odds don't seem to support it.

For every Tom Brady and Kurt Warner, there are dozens of mid-round quarterback talents like Dixon and St. Pierre who simply don't measure up.

The Steelers may have picked up a talented quarterback in the just concluded draft, but in my opinion, they didn't do so with any real intent in mind, other than maybe finding Roethlisberger's future back-up.